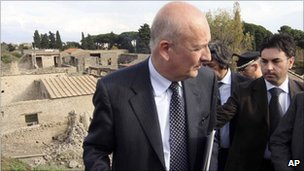 A close ally of Italian Prime Minister Silvio Berlusconi is under pressure to resign after a building collapsed at the 2,000-year-old Pompeii site.

Culture Minister Sandro Bondi faces a vote of no confidence in parliament over the collapse of the “House of the Gladiators” on Saturday in heavy rain. The opposition accuses the government of letting Pompeii fall into neglect.
Staff at museums, libraries and other institutions plan to strike on Friday over budget cuts to culture Mr Bondi, one of three national co-ordinators of Mr Berlusconi’s People of Freedom party, has admitted that more buildings at Pompeii are in danger. But he added that it would be wrong for him to quit over what he said were long-standing problems at the site. Mr Berlusconi no longer has a majority in the lower house of the Italian parliament since his former ally Gianfranco Fini formed his own party, Freedom and Future for Italy. While Mr Fini’s bloc is unlikely to vote against Mr Bondi, it could use the occasion to send a message to Mr Berlusconi, possibly by abstaining. ‘No maintenance’ Pompeii was destroyed in AD79 when a volcanic eruption from nearby Mount Vesuvius buried the city in ash. It was not uncovered until the 18th Century. The house, known as the Schola Armaturarum, was used by gladiators for training before fights in the nearby amphitheatre. Tsao Cevoli, president of Italy’s National Association of Archaeologists, called its collapse “an irreparable wound to the world’s most important archaeological site”. Extra funds were made available two years ago and special measures put in place to improve conservation at Pompeii, but critics say the plan was badly managed. Italian heritage experts warn that many other monuments, including Bologna’s twin towers, Florence’s Cathedral and Nero’s Golden House in Rome, are also vulnerable to collapse. “With no maintenance and non-existent funds, the whole of Italy is at risk of collapsing,” Alessandra Mottola Molfino, head of the heritage charity Our Italy, told AFP news agency.