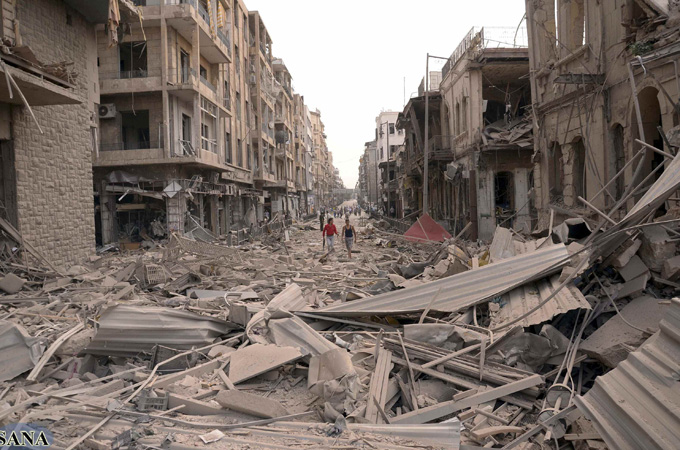 A Syrian government official says at least 25 people have been killed and more than 70 people wounded in a series of bombings that struck the northern city of Aleppo.

The official also says that scores of people were wounded in the explosions, which went off Wednesday in a main square in the city, near an officers’ club.

Aleppo-based activists also reported on the bombings, saying they went off minutes apart.

The blasts occurred at Saadallah al-Jabiri Square near a military officers’ club and a hotel, the Syrian Observatory for Human Rights said, adding that there were “dozens of dead and wounded.”
The Britain-based Observatory, which relies on a network of activists on the ground, reported that most of them members of the regime forces.

Aleppo-based activist Mohammad Saeed said the explosions went off minutes apart at one of the city’s main squares. He said the blasts appear to have been caused by car bombs and were followed by clashes and heavy gunfire.

In a statement, the SOHR said the explosions went off following a clash between guards at the military club and gunmen, suggesting the attacks may have been suicide bombings.

Suicide and car bombings targeting security agencies and soldiers have become common in Syria, particularly in the capital, Damascus, during the course of the 18-month-uprising against Assad.

But such bombings have been rare in Aleppo, which was spared the mayhem that struck other Syrian cities during the first year of the revolt.

Nationwide, at least 104 people were killed on Tuesday, 57 civilians, 26 soldiers and 21 rebels, the Observatory said.

Among them were civilians hit by intense shelling from the army against rebel-held areas of Damascus.

Syria peace envoy Lakhdar Brahimi is due back in the region this week to try to revive talks aimed at ending the bloodshed, officials said.

Jan Eliasson, deputy to the UN chief, said he did not know if Brahimi would be able to enter Syria, but hoped to persuade the Assad regime to “go in the direction of a reduction of violence.”

The uprising against Assad that erupted in March 2011 ago has gradually morphed into a bloody civil war.

The conflict has killed more than 30,000 people, activists say, and has devastated entire neighborhoods in Syria’s main cities, including Aleppo.