FARC-EP CALL ON GOVERNMENT TO WORK FOR BILATERAL TRUCE 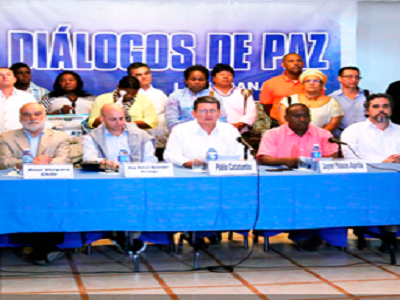 The FARC-EP has released a statement, «deeply deploring the consequences of the ongoing offensive by government troops against our units in unilateral truce».

Colombian president, Juan Manuel Santos had announced immediately after the guerrilla’s response to an armed attack by soldiers, that air bombing of the guerrillas’ camps will be resumed. They had been suspended last 10 March.

The clashes which left 10 soldiers dead and 18 injured in the municipality of Buenos Aires, Cauca, where the result, the FARC-EP said, of the military siege of the army.

In their statement the FARC-EP underline that «Public statements by high officials make clear that the events occurred in the context of intense counter-guerrilla operations on the ground that are increasing ever since the start of the ceasefire».

The guerrillas denounced «the premeditated attacks carried out by the Public Force, causing casualties among our ranks and putting at risk the process of de-escalation of the conflict, which has been started in order to decrease the impact of war on the population».

The FARC-EP also stressed that they «remain convinced that while developing peace talks, it is absurd to continue sacrificing lives on both sides. We regret the loss of lives caused by the conflict, causing the mourning of Colombian families. It is increasingly clear that it is urgent to reach the signing of a bilateral cease-fire, which will create a better environment to advance towards the signing of a final agreement».

The FARC-EP Peace Delegation in Havana, where talks with the Colombian government are going on since 2012, reiterated that they «believe both parties must proceed to lower the tension in the whole country and in the Cauca region in particular. Accordingly, we request the immediate launching of mechanisms of verification and distension of the situation of military confrontation in the area where these unfortunate events have occurred».