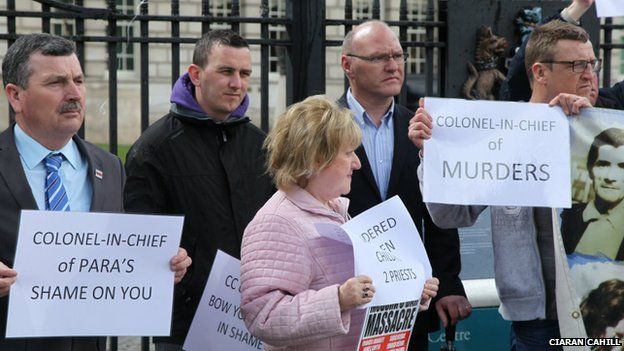 Sinn Fein leader Gerry Adams caused controversy today when he met  ‘Prince of Wales’ Charles Windsor in a meet-and-greet opportunity during  the first day of his four-day royal tour through Ireland.

Mr Adams arrived at the National University of Ireland, Galway at about  midday and said he presumed he would shake Charles’ hand during his  visit to the college. He said he hoped the meeting would contribute to  reconciliation in the north of Ireland.

“I don’t have any expectations other than this being an engagement which  I hope is symbolic and practical, and will assist that entire process,”  he said.

After some behind-the-scenes choreography, Charles approached Adams and  while gripping a cup of tea, exchanged pleasantries before Adams  introduced him to local Sinn Fein representative Trevor O Clochartaigh.

In Derry and Belfast, relatives of some of those killed at the hands of  Charles’ Parachute Regiment in the Bloody Sunday and Ballymurphy  massacres led protests against the visit, and reiterated their demands  for truth and justice.

There were also calls for the British government to finally hand over  files relating to the Dublin and Monaghan bombings, which took place 41  years ago this week. Sinn Fein’s MP for west Belfast Paul Maskey joined  the Ballymurphy protest, even as his party leader was preparing to  welcome the royal visitors.

In a statement issued ahead of the meeting, Adams noted that the prince  had been bereaved by an IRA attack in which his cousin, (‘Earl’) Louis  Mountbatten, was killed in 1979. But he also said that Charles’s  regiment in the British Army had been directly responsible for the  murder of scores of Irish civilians.

“Prince Charles is Colonel-in-chief of the Parachute Regiment, a unit of  the British army responsible for killing many Irish citizens, including  in Derry, Ballymurphy, Springhill and other communities across the  north.”

“But he also has been bereaved by the actions of republicans. Thankfully  the conflict is over. But there remains unresolved injustices. These  must be rectified and a healing process developed.”

Tory party grandee, (‘Lord’) Norman Tebbit, accused Mr Adams of having a  “guilty conscience” for saying that British Army paratroopers were  responsible for a number of massacres.

Tebbit, the former Cabinet minister who was himself injured in an IRA  bomb attack in 1984, said Adams’s references were the sign of a “guilty  conscience”. “It is what I would have expected,” he said. “Those with  the most guilty conscience talk the most.”

Tomorrow, Lissadell House is part of the royal itinerary in Sligo, which  begins with a civic reception. Former Sinn Fein mayor of Sligo Sean  McManus, whose son Joseph was killed in a gun battle with British Crown  forces in the North in 1992, will attend the function.

Anti-monarchy campaigners who organised a roadside protest in Galway  condemned reports that Irish schoolchildren are being coached on how to  use royal protocol while speaking to Charles and his wife Camilla.

Meanwhile, republicans in Dublin are organising a vigil at 6pm this  evening at O’Connell Street in memory of all the victims of British  state violence.

Kate Nash, whose 19-year-old brother William was shot dead by British  Parachute Regiment soldiers during Bloody Sunday said she was furious at  Sinn Fein’s approach to the visit.

Thirteen people were shot dead by the British Army on Sunday, 30 January  1972 at a civil rights march in Derry. A 14th man died later from his  wounds.

“I’m disgusted and furious at the very fact that Sinn Fein are going to  be entertaining Prince Charles here. What they are doing is utterly  disgraceful. It’s indefensible.

“If Prince Charles did anything like use his influence to get the  disgraced parachute regiment disbanded, then I would welcome the man  himself,” she said.

“Sinn Fein are in the business of cleaning up the dirty war that was  inflicted on the people here during the troubles.”

Ms Nash said she failed to see what healing could be gained from the  meeting, and that her brother “has still not got justice.”

“It’s almost five years since we had an apology from the British prime  minister concerning Bloody Sunday and to date not one soldier has been  questioned about those crimes.

“Surely if the man (Prince Charles) has some integrity, he should reject  that title and use his influence to have the parachute regiment  disbanded.”