Ireland has become the first country to legalise same-sex marriage through a popular vote, with indications from all count centres across the country showing ‘Yes’ votes outnumbering ‘No’ votes by about two-to-one 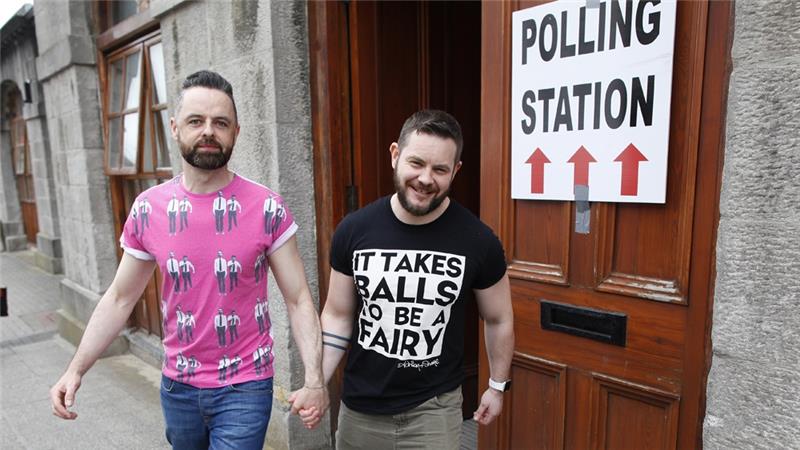 Ireland has become the first country to legalise same-sex marriage  through a popular vote, with indications from all count centres across  the country showing ‘Yes’ votes outnumbering ‘No’ votes by about  two-to-one.

Tallies from the Dublin constituencies show a ‘Yes’ vote of around 70%  while other areas are said to be slightly lower, at around 60%. The  official result will be announced later this [Saturday] afternoon.

It was one of the highest ever turnouts for a referendum in the  country, with almost 60% of registered voters taking part. In the last  referendum two years ago, only 39% voted nationally in an unsuccessful  bid to abolish the Seanad, the upper house of the Dublin parliament.

In a state where homophobia has been the norm — homosexuality remained  illegal until 1993, and gay men were often forced to join the  priesthood — the result marks a significant ‘coming out’ for Ireland’s  LGBT community.

It was also a stunning success for the ‘Yes’ campaign, largely funded by  Irish-American billionaire Chuck Feeney, and opposed by only two of  Ireland’s 166 members of parliament.

Although officially against the measure, the Catholic church in Ireland  took a low-key approach to the referendum, partly due to some support  within the church itself. In January, a Dublin priest announced during a  Saturday night Mass that he supported the referendum and that he is gay.

His congregants gave him a standing ovation.

But the most dramatic support on Friday came from an unexpected source:

Irish emigrants. Under Ireland’s controversial electoral laws, Irish  citizens are only allowed to vote for 18 months after they move abroad,  and must travel back to Ireland to cast their ballot.

The journey home to cast their vote became an emotional homecoming for  many and there were renewed demands for the Dublin government to  legislate for a postal vote for emigrants.

Joey Kavanagh, who organised a bus-and-ferry journey from London, said  he and about 50 others made the eight-hour journey back to Dublin. He  said he had been “genuinely overwhelmed” by the scale and the scope of  the ‘Home to Vote’ movement.

Cormac O’Sullivan, a 34-year-old humanitarian aid worker, flew home from  Nairobi to Cork to vote. “Equality for the LGBTQ community has been  something my family has always supported,” he said.

Siomha Brock, a 27-year-old musician from County Clare, travelled back  from Vancouver on Wednesday.  “It’s more than just about marriage; it is  an opportunity to open our arms to the LGBT community,” she said. “My  partner and I want to be seen as equal in our home country.”

Scenes of returning emigrants filling Dublin airport had an electric  effect on ‘Yes’ campaigners on polling day. Author Colm O’Regan tweeted  that it was like a scene from ‘The Hobbit’: “An army of elves you’d  forgotten from earlier in the film arrive over a hill”.

Some said they hoped that the end of official discrimination against  gays and lesbians would mark the end of the overbearing influence on  government policy of the scandal-plagued Catholic Church.

“It’s a different era,” said Pat Carey, a former government minister who  came out as gay in February, at age 67, and who campaigned for a ‘Yes’

vote. “There’s a whole new demographic out there that has a vision of an  Ireland that’s kinder, more inclusive and more tolerant.”

Fine Gael’s Simon Coveney also said there was a sense as people voted of  Ireland “letting something negative go, leaving a prejudice we know is  there as part of our history behind us”.

Sinn Fein leader Gerry Adams said the referendum had “brought the issues  of inclusion and equality to the fore of public discourse in a very  positive way”.

People were also asked whether to reduce the minimum age of presidential  candidates from 35 to 21 years, while a Dail by-election was also held  in the Carlow-Kilkenny constituency.

The results of all counts will be officially declared late Saturday  afternoon.