Padraig Pearse in The Sovereign People says: “The end of freedom is human happiness”. This Friday we have a huge opportunity to make an awful lot of people happy, and wouldn’t that be a great thing to do on Friday. 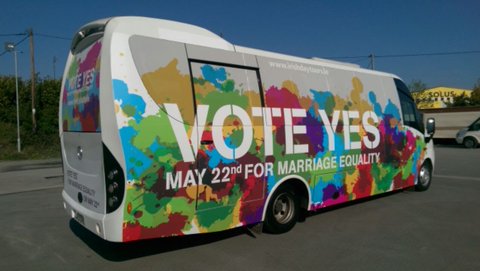 There are no certainties in politics or when it comes to ‘the vote.’

Constitutional decisions are not taken on the basis of opinion polls. The only poll that counts is the one in which citizens exercise their democratic mandate at the poll. Opinion polls may suggest that the marriage equality referendum will be passed on Friday but only the people have the power to make that decision.As we saw recently in Britain opinion polls can be wrong. The British Labour Party was badly mauled, neither of the north’s unionist parties emerged as ‘kingmakers’, and the Tories were returned with a clear and workable majority. None of the polls forecast those outcomes.

So, not for the first time the peoples’ wishes confounded the pollsters predictions.

If you have a vote in the two referendums in the 26 counties – on marriage equality and the lowering of the age for candidate in Presidential elections – then I am asking that you vote YES. If you don’t have a vote but know someone who does pick up the phone, send an email, or text or direct message them. Of the two referendums the marriage equality vote has become a litmus test for the humanity and tolerance; the understanding and compassion of society in that part of the island. It has sparked one of the most important debates in recent generations. in politics or when it comes to It has now about more than the right of a man or a woman to marry someone of the same sex.

It will in a very real and fundamental way be a profound judgement on the spirt and intent of the citizens of the south of Ireland.As an Irish republican my starting point is the Proclamation. This document, which is frequently described as the ‘mission statement’ of modern Irish republicanism, is quite definitive. It declares its resolve to ‘pursue the happiness and the prosperity of the whole nation and all its parts, cherishing all of the children of the nation equally.’

We are those children. All of us. Without exception. We are all the children of the nation.But the debate has gone beyond even this concept, this principal. It is about more than equality. It’s about happiness and inclusivity and acceptance. For too long our gay brothers and sisters have been forced by outdated law and prejudice to live a lie or to stay in the shadows.

Now as we have debated the issue of marriage equality the conversation has widened beyond the legal to the personal; beyond the constitutional to the human and emotional. I have listened to gay citizens talk openly and honestly and publicly about their lives and loves; their worries and hopes in a way I never have before. As a consequence this debate has taken on a new dynamic and imperative. It has become more than just a debate about marriage equality – it’s about the right of every single citizen to be comfortable and happy in their skin and for their difference to be embraced and loved.

Many of us are lucky to have found our soul mate. That very special person who shares our lives with us in good times and bad. Others are still searching. Why should the right to love be subject to chauvinism and bigotry and bad law?Why can’t a gay person fall in love, marry, have a family, be loved, and enjoy intimacy and happiness. Is their love somehow different from the love of heterosexual couples? Are their emotions and feelings somehow different? And why can’t the love of a gay couple be recognised and valued and accepted in the same way as that of a heterosexual couple?

Marriage, if it is to mean anything, must be about love. It’s about two people committing to each other in a very special way. No one should be barred from that experience and that commitment.All of us know citizens who are gay. They are loved members of our family; they work with us in our jobs; they are our neighbours, our friends and our comrades. They deserve the same rights and protections under the law as everyone else.

They should also have the same rights to the rituals and legal and constitutional protections of our society that provide community and family solidarity and belonging. It’s easy to be a begrudger. To insist that only your way of thinking and of behaviour is the right way. To insist that society should stick with the rules and regulations that are part of our past. But humanity is thankfully not like that. If it was we would still be living in the stone age; or only the rich and powerful would have the vote; or women would still be chattels not citizens; and the laws which govern and shape our lives would never change and society would stagnate.

Fortunately, there are always courageous people, brave people, who will make a stand against injustice. Brave citizens will endure public humiliation, imprisonment and worse to advance fairness and equality and justice.I have had the honour to meet many courageous people in the course of this referendum. Good people who don’t want to discriminate or hurt anyone. There is an opportunity on Friday May 22nd to help transform society in one part of this island and help reshape it across the whole island. Padraig Pearse in The Sovereign People says: “The end of freedom is human happiness”. This Friday we have a huge opportunity to make an awful lot of people happy, and wouldn’t that be a great thing to do on Friday.