No Ordinary Elections for Turkey 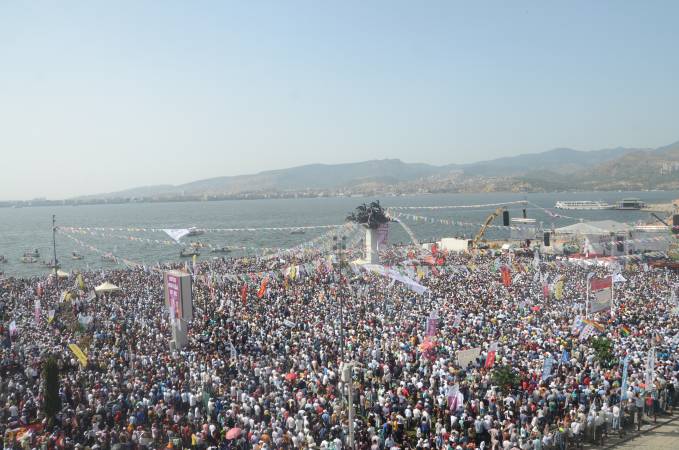 Turkey goes to the polls on Sunday. Voters will say if President Erdogan could change the Costitution and be crowned absolute leader

“We need to move 600 thousand votes to HDP (Peoples’ Democratic Party) in order to build another Turkey”, Ertugrul Kurkcu, former BDP deputy for Mersin and now HDP candidate in Izmir, says matter of factly while driving towards the last election campaign meeting. It’s Thursday. By Sunday night Turkey will be different, whatever the outcome of the ballot box.

“This election – says Kurkcu – has turned into a referendum: for or against the presidential system advocated by Recep Tayyip Erdogan. Indeed voters are divided in two net camps, those in favour and those against Erdogan’s project for Turkey.

Whether the yes or the no win from 8 June Turkey will be different”.

Kurkcu admits that “the biggest challenge for us in the HDP is crossing the 10% threshold. This meant we had to work under constant pressure because we can only enter parliament as a party if we are able to convince voters to change their voting habit and give us a chance”. The other parties, namely the CHP (Republican People’s Party, the centre Kemalist party) and the MHP (the nationalist fascist party) haven’t got this problem. “They might be concerned – he adds – about the final percentage of votes they get but they are not running against time in order to cross the 10%”.

Kurkcu is optimistic and think that the HDP “will enter parliament because we worked well and we have been able to meet the challenge of presenting ourselves as a party and not as independent candidates. The most difficult part, clearly, has been campaigning and winning simpathies in constituencies which are not traditionally Kurds-friendly. I guess we were able to convince people they have nothing to fear from the HDP. We are a young and dynamic party, progressive and determined to not let Erdogan shaping a bigot and warmongering Turkey”.

As well as convincing non traditionally Kurds-friendly voters, the HDP had to convince also many Kurds who previously voted for the AKP. “This was another challenge – admits Kurkcu – because it is true that many muslim kurds voted for Erdogan. They were attracted by his charismatic leadership. But the AKP made a terrible mistake when the crisis in Kobane happened. The stance the government took on Kobane and Kurds – says the HDP candidate – was seen as a declaration of war to all Kurds in the region. People were watching the thousands of refugees fleeing their homes under ISIS attacks but more importantly they were watching Erdogan and the AKP doing nothing to help the people defending their city. Indeed the AKP was supporting ISIS and offering its men logistic and (as it is now been proved once more) financial aid. Muslim kurds reacted against the AKP stance and it is now a matter of “honour” almost not to vote for them”.

Izmir, the third most populous city in Turkey (after Istanbul and Ankara), is the ancient port city of Smyrna on the Aegean Sea. A traditional CHP stronghold, Izmir could see a shift towards the HDP in these elections. Indeed Kurkcu thinks they can easily cross the 10% threshold here. “I am confident – he says – we can get 15% of the votes in this constituency”. Surely Kurkcu has the right profile and his political background and personal history make him the ideal MP for a working class and secular area such as Izmir. A journalist and founder of the human rights focused news agency Bianet, Kurkcu was a leader of the youth left movement DEV-GENC (Turkish Revolutionary Youth Federation). In 1972 he was the only surivor or the bombing of the house in Kizildere where he and other 10 activists were hiding with two NATO technicians they had kidnapped asking for the release of revolutionary leader Deniz Gezmis and two others who had been imprisoned during the 1971 military coup and sentenced to death. Kurkcu, badly wounded, was captured and sentenced to death. In 1974 an amnesty law commuted his sentence to 30 years in prison. He served 14 and was released in 1986.

As he walked through the streets of Izmir Kurkcu is called in by shopkeepers to have a tea in the characteristic minuscolous glasses “cay” is served. People stop him and want to have a word with him. All agree that “this is not an ordinary election”. Bulent Celik, who owns a restaurant, says that “we are in fact fighting a national struggle”, and he curiously uses the same term the AKP supporters use. Yet president Erdogan has been conducting a subtle campaign since he came into power in 2002. Indeed if he manages to change Turkey into a presidential system, Erdogan will be its “national leader”. The AKP is defined as “the party of the nation”, while opposition has been depicted more and more often as the “enemies of the nation and its national interests”.

The strategy designed by Erdogan and his acolytes has come a long way. In 2002 when the AKP came to power it presented itself as a “conservative democratic” islamic party, the “acceptable Islam” [acceptable for the West, that is. The Twin Towers had been attacked only a year previously], a party which respected secularism and the definition of the nation along secular lines. But this moderate islam, apparently in line with market economy precepts and finding nothing strange to be ruling a country member of NATO, soon begun to show its real face. The centre-right politics it said to be preeching, and its strong-worded critic of islamism, soon faded away and President Erdogan begun repeating that Turkey in fact was going to live radical changes. Thus the redifining of the AKP strategy which now is called “Silent Revolution” (see this year electoral manifesto) the culmination of which is indeed the presidential system which will allow the foundation of the New Turkey.

As the AKP political discourse became more articulated, people in the country were told they are to support the “last war of independence”. Not doing so bring along accusation of being “pawn of the enemies” or “acting against the nation”. A nation which is more and more resembling and presented as “the last hope” for muslims around the world. Erdogan made it clear once and once again: at stake is the fate of all muslims in this election.

So, if Erdogan wins this Sunday, he will have all power in his hands, he will change the Constitution and go for a presidential system, which will virtually turn him into the absolute leader.

“And be sure – says Kurkcu – that one of the first thing the new leader will do, is to declare war both on the PKK and Syria as well as on all political dissidents”.

Indeed the President has assured to have at least the most important structures and bodies for future political repression. “I am one of those who believe – says Kurkcu – that in this electoral campaign Erdogan has employed a special clandestine and illegal repression structure which is responsible for the over 150 attacks our party premises, campaigners and supporters suffered”.

Should Erdogan not gain a Constitutional majority (330 deputies), then the possible scenarios will be somewhat complicated and dangerous. “No party – says Kurkcu – could safely govern alone, and this will necessarily mean a coalition government. But which coalition?”

The AKP with 276 votes could govern alone but could not change the Constitution. They might go for a coalition with the CHP which has not categorically ruled out such an hipothesis. The other possibility is that of a CHP-MHP coalition which would be very instable. There is also the possibility of a minority government enjoying some parlamentary support and leading the country to an earlier elections.

The HDP has categorically ruled out any coalition with the AKP. “Things will change dramatically – energically says Kurkcu – if we pass the 10% threshold because we would authomatically get 50 deputies, so preventing the AKP to gain the 330 seats necessary to change the Constitution”. Besides, insists the Izmir candidate, “with the HDP in parliament Turkey will have the chance to really begin to change”.