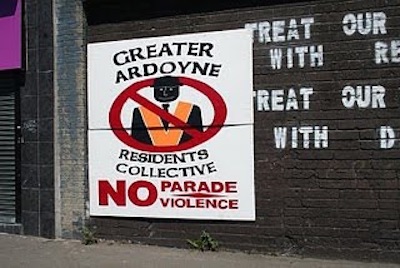 Tensions are running high in a number of flashpoint areas in advance of the ‘Twelfth’ parades, and thousands of PSNI police have been deployed to facilitate the marches by the anti-Catholic Orange Order.
Sunday marks the anniversary of the victory by the Protestant King William of Orange over Catholic King James at the Battle of the Boyne in 1690. Over 800 sectarian marches are taking place to mark the event over the weekend, the height of the marching season.

The Parades Commission, the body set up to rule on the marches, has imposed restrictions on more than 50 of them. The biggest display will be in Belfast where 71 bands and hundreds of Orangemen will march through the city centre.

One of the largest operations will be mounted at Ardoyne, where permission has been given for Orangemen to parade down a section of the nationalist Crumlin Road on the morning of July 12, although the return route is prohibited in the evening.

Last year there was no disorder in Ardoyne, but previous years have seen trouble and rioting. This year, a nationalist residents’ group is to stage a peaceful protest against the feeder parade past the Ardoyne shops.

The Greater Ardoyne Residents Collective (GARC) condemned a Parades Commission determination that only 60 people can attend the GARC protest on Monday morning.

“GARC wish to remind the public that it has been proven in court that as many people as possible can stand and monitor parades for breaches of determinations. Therefore we repeat our call for residents and supporters from other areas to assemble at Estoril Park/Ardoyne Road at 8am on Monday morning,” a statement read.

In Newry, a total of twelve sectarian parades are planned over the next four days, and severe disruption is expected in the predominately nationalist town as result.

eirigi’s Newry representative Stephen Murney said local residents are becoming increasingly frustrated at the disruption and inconvenience caused, “not to mention they have to endure the spectacle of participants in these triumphalist parades dancing around the streets of Newry”.

He described the parades as coat-trailing exercises.

“The organisers of these marches, along with unionist representatives, constantly tell us that these are “fun filled events” with a “festival atmosphere” which take place to express “culture”.

“The reality is that the organisations which take part, such as the Orange Order, are founded on bigotry and hatred. It was just a few months ago that unionist thugs in band uniforms attacked a local resident’s car causing damage and fear to the victims. That particular incident was highlighted in the local media.”

He said the scourge of sectarianism had no place in today’s society.

“These unwanted parades should be stopped indefinitely and the people of Newry should be allowed to go about their daily business without being subjected to a hate filled display of bigotry year in and year out.”

A Parades Commission decision to re-route a loyalist band parade away from Castlederg’s Lurganboy Road has been welcomed by Sinn Fein, but three other parades in the town have only minor restrictions, a decision described as “incomprehensible”.

Castlederg Young Loyalists Flute Band had applied to march along the contentious route tonight [Saturday night]. It is one of two loyalist parades due to take place in the town on the so-called ‘Eleventh Night’.

Sinn Fein’s Ruairi McHugh said that reservations remained about determinations pertaining to the other July 11 parade and two further marches on July 13, and called for “constructive dialogue” to resolve the dispute.

However, one previously infamous parades took place without incident last weekend, when the Orange Order in Portadown marked the 20th anniversary of the Drumcree stand-off.

Members of the Order have staged weekly protests at the site since they were banned from marching along the mainly nationalist road in 1998. After attending a service at Drumcree Church last Sunday, Orangemen marched to police lines where a token protest was held.

Garvaghy residents spokesman Breandan MacCionnaith continues to urge members of the Orange Order to consider an alternative route. “Our community has moved on, others need to do likewise,” he said.