Refugees: The Road to compassion

Aylan was not asleep. His death was not peaceful. He had died with his five year old brother Galip and mother Rihan and seven other refugees trying to cross the five dangerous miles from Turkey – which is outside the EU –to the Greek island of Kos which is inside the EU 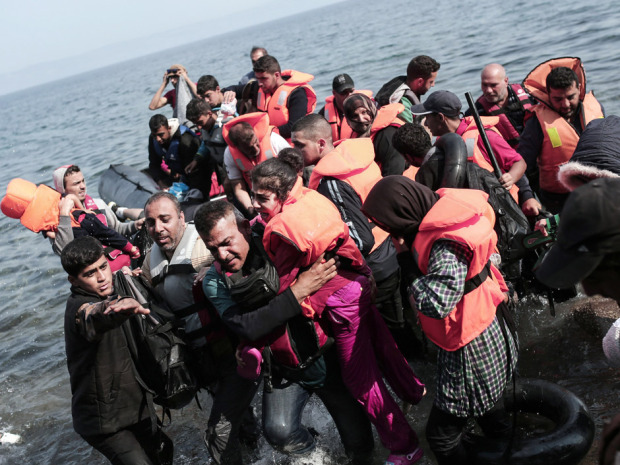 There are some images that have seared their way into the collective consciousness of humanity. Most are traumatic. In my lifetime the screaming face of a naked young girl – Kim Phuc – badly burned from a napalm attack, running down a road, as US troops in Vietnam looked on, is one. Fr. Edward Daly frantically waving a blood stained handerchief as a group of frightened men pass British soldiers carrying the body of another who was shot during the British Paras assault in Derry on Bloody Sunday is another.

Soweto in 1976 and school children taking on the military might of the apartheid south African regime. Four little babies, in blood splattered white shrouds, lying in an ice-cream freezer in Gaza last summer. The rubble of the Shankill as dust covered men and women desperately scramble through rubble trying to find survivors.We each have our own memories of these and other events. Where we were when we saw them. The emotional jolt.

The sadness, the shock, mixed with anger, which often turned to outrage.

Sometimes the image lifts the spirit. Rekindles our belief in humanity.

Whether it was ordinary citizens taking hammers and sledge hammers to the Berlin Wall or the release of Nelson Mandela.But most frequently the image is violent and distressing. Despite this the public and personal reaction is often shortlived as the next shocking image or piece of film, of the next atrocity, emerges onto our television screens or newspapers. They rarely have a lasting political impact. The image comes and goes. It remains in our memories. But the media move on to the next event and the political leaders and governments, having expressed their condemnation, put it behind them.But there are exceptions. The harrowing and distressing photo last week of three year old Aylan Kurdi lying on a beach in Turkey is one of these. How many times have you walked into a bedroom and looked into a cot, or onto a bed, and watched your son or daughter or grandchild lying peacefully asleep with their face pressed into the mattress and backside sticking up defiantly? But Aylan was not asleep. His death was not peaceful. He had died with his five year old brother Galip and mother Rihan and seven other refugees trying to cross the five dangerous miles from Turkey – which is outside the EU –to the Greek island of Kos which is inside the EU. Like so many other instances we have heard of in recent months the boat was too flimsy and the sea too rough. In April as many as

700 men, women and children died when a boat carrying refugees sank about

60 miles off the coast of Libya. In response to this disaster and other incidents in which boats sank and people drowned the EU increased its naval presence in the region. The Irish government dispatched the Lé Eithne in May. During its tour of duty it saved thousands. Lieutenant Commander Eric Timon said: «The numbers of people fleeing Africa for whatever reason… casting themselves adrift on unseaworthy vessels in the hope of rescue or the hope of reaching European shores, it’s quite extraordinary.”The Lé Eithne was replaced by Lé Niamh. Together they have rescued an astounding five and a half thousand people. Lé Samuel Beckett will shortly take over this essential humanitarian work. If the Irish boats hadn’t been there all of those people might well have died.Despite the efforts of the Irish naval vessels and others from many countries the deaths are continuing. Last week as the world mourned a little Syrian child and grieved with his father for the family he has lost another 200 refugees drowned less than a mile off the Libyan coast. Some had been locked in the hold of the ship unable to escape.So far this year over two and a half thousand have died in the Mediterranean Sea. But now the media and political focus has shifted.

Thousands of desperate Syrians, Eritreans, Kurds, and others have taken to the roads of Europe. They are walking hundreds of kilometres from Greece, up through the Balkans, to Germany. The Hungarian government has behaved shamefully but ordinary citizens along their route have demonstrated great compassion to this unfolding human tragedy.It was into this crisis that the dreadful image of Aylan Kurdi has injected a greater sense of political momentum. Germany has said it will take up to a million refugees. Other states have been less forthcoming as their governments enter into a new round of negotiations to discuss how they will respond to this crisis.The cynic in me says that the more positive noises in recent days from European governments has less to do with the photo of a dead child on a beach and more to do with the countless thousands of refugees who are on the roads of Europe – no longer penned in to camps or ports in Italy and Greece. This is a human catastrophe that can no longer be ignored or politically defused with a quota agreement that targets 40,000 when hundreds of thousands – millions – are on the move.Martin McGuinness moved quickly to argue that the north should take several thousand refugees. The Irish government is still deciding what it should do but it is difficult to see how it cannot agree to substantially increase the miserly 600 it was to take under the previous quota system. It needs to decide this quickly and to respond generously.Perhaps it’s because we are an island people, colonised for centuries, who have been forced to flee in our millions for freedom and work or perhaps it’s because we naturally abhor injustice. But whatever the reason the public response has been amazing. Thousands of offers of accommodation and help, including collections of clothing, have been made.

Ordinary citizens have opened their hearts and are pledging to open their homes also to aid those in need. The governments of Europe have a responsibility to do more. It was their greed and imperial ambitions that created the context for much of this crisis 100 years ago. It was the political and military decisions they have taken in the decades since, and mostly recently in respect of Palestine, Iraq, Syria, Libya and Afghanistan, that have shaped the violent maelstrom that is gripping the Middle East and north Africa. In Syria alone hundreds of thousands have died; seven million citizens have been disposed of their homes and communities within the country and more than five million are scattered in refugee camps in surrounding states.The conditions in the camps are appalling and are set to get worse. The United Nations humanitarian agencies have no money and cannot meet the needs of millions. In recent months food rations for Syrian refugees in Lebanon and Jordan, as well as in north Africa have been cut. Many health care services run by the UN in Iraq have been closed. Last month 184 health clinics run by the World Health Organisation in Iraq were also closed. WHO needs $60 million for Iraq. Thus far it has only raised $5 million. A recent report in the Guardian newspaper quoted one Syrian refugee, Fatmeh, who said of her two children in Lebanon: “When we can’t afford both medicine and food, I tie scarves around my boys’ bellies at night so they don’t wake up crying from stomach aches because they are hungry.”Is it any wonder that families have chosen to make the perilous journey to Europe? It’s time that the EU institutions, European governments and Mr. Kenny and his colleagues, agreed to be as generous and as imaginative and as compassionate as this crisis demands of them.