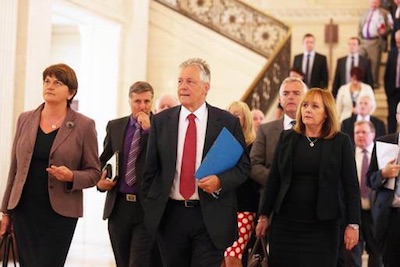 A Stormont committee has refused on Thursday to adjourn the Six County Assembly  despite a DUP threat that it would otherwise pull down the North’s  political institutions.

On Wednesday, DUP leader Peter Robinson vowed that his party would resign  from the Stormont Executive no later than Thursday night if the Assembly’s  business committee did not agree the proposal or if the British  government did not suspend the institutions.

It is thought a suspension could be announced within hours.

They are being questioned about the death last month of Short Strand  man Kevin McGuigan, the chief suspect in the murder of former PIRA  commander Jock Davison last May.

The PSNI police chief George Hamilton said last month that he suspected  individual Provisional IRA members had a role in Mr McGuigan’s murder,  although he admitted that the organisation no longer functions in a  military capacity.

Sinn Fein maintains that the Provisional IRA has ceased to exist.

The current crisis was also sparked by the decision last week of the  DUP’s main rivals, the UUP, to withdraw its minister from the  power-sharing Executive and become an ‘opposition’ party.

«The contrived crisis has been provoked by the crass party politicking  of [UUP leader] Mike Nesbitt who is incapable of providing leadership,»  said Sinn Fein negotiator Conor Murphy.

«And in a further failure of leadership the DUP are foolishly  responding to the stunt politics of the UUP.»

Sinn Fein voted against the adjournment, or recess, of the Assembly in  today’s meeting of the Stormont business committee. They were supported  by a combination of the SDLP and Ulster Unionist parties.

Votes on the business committee do not require cross-community support,  but straight majorities. Last week, the DUP’s request for the  adjournment was similarly rejected because it was supported only the  Alliance Party.

The SDLP failed to change their mind despite a crisis meeting with the  26-County Taoiseach Enda Kenny in Dublin this morning. Party leader  Alasdair McDonnell said earlier today the decision would be in the best  interests of the «whole community».

Nationalists had expressed concern at Robinson’s use of the ‘bullying’  tactic to force his agenda, and warned it could be used similarly  again.

After today’s meeting, Mr Adams said he hoped both governments «will  respect the integrity» of the decision taken by the Assembly via its  business committee, and make it clear they will not suspend the  institutions.

«We need real talks, not pretend talks» to resolve the outstanding  issues, he added.