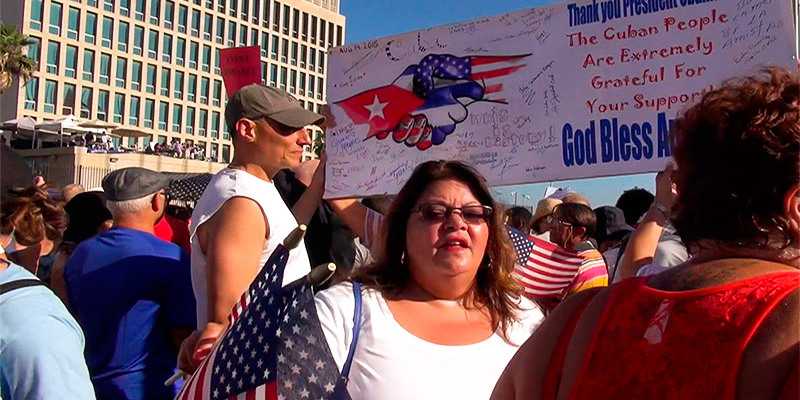 Private nightclubs and discos enliven Havana’s nights, even though these do not officially exist under the government reforms.

The first time I went rafting down a mountain river, the instructor explained to us that the only way to keep the raft under control – and avoid being thrown against the rocks by the current – is to row quickly with the current.

Cuba’s economic reforms remind me of those rivers that begin to swell as they flow downhill. To try and set a pre-established pace for these changes is like thinking that one can make a raft stop in the middle of the river.

The government seems intent on avoiding all improvisation in economic matters, something that cost Cuba dearly in the past. However, it is finding it difficult to make slow progress while maintaining overall control over the changes taking place in society.

For years, they’ve been “assessing” the possibility of opening up wholesale supply stores for cooperatives and the self-employed. They are also “assessing” the mechanisms these could use to import the tools and supplies they need for their work.

While authorities continue to study and draw up pilot plans, Cubans with a bit of street-smarts have set up a system to import containers from Mexico, Panama and other countries. They even advertise on the Internet and sell their products via catalogues.

Most of the clothing sold by seamstresses is in fact second-hand clothing smuggled into the country.

Through them, one can get one’s hands on just about anything: doors, furniture, chainsaws, washing machines, fridges, hotel supplies, tools, lamps and air conditioning units. They supply a great many of Cuba’s self-employed, including many private restaurants.

These supplies are also bought by private discos and bars, even though these do not officially exist under official reforms. Thanks to the popular (i.e. the real) reform, these are spreading like fungi and are among the most profitable businesses out there, given the natural propensity of Cubans and tourists to “party.”

The mechanism is simple: all discos and bars operate under a restaurant license. To pull the wool over the government’s eyes, they offer a menu that includes 3 or 4 dishes they can throw together in case of inspection. “It’s not our fault that customers chose to dance and drink rather than eat,” one of the owners told me.

The government authorized the establishment of clothing workshops but forbade the import of garments. The problem is that it hasn’t made fabrics, threads and other needed supplies available to seamstresses and fashion designers. Therefore, the bulk of the clothing being sold continues to be contraband.

A self-employed person in the sector tells me how he skirts these restrictions: “I had badges with the name of my store made and hired several seamstresses to sow these onto the garments I bring from abroad. Who can swear we didn’t make those garments ourselves?” he asks.

Computer services constitute yet another field where reforms from below fail to be controlled by those in government. The professionals are categorically barred from operating private businesses, but they do so domestically and internationally.

The most successful of the lot have websites where they earn good money promoting private businesses. Others are hired by foreign companies to program for them in Cuba. An engineer tells me he doesn’t want to emigrate but that “I’ll leave the country if they won’t let me continue doing my work.”

The eyes and ears of the government are another piece of the puzzle. The “bite” inspectors take is another operational cost Cuba’s self-employed have to pay. For a monthly quota, those tasked with enforcing the law play deaf and blind.

By dint of the “domino effect,” once you’ve pushed one piece, the others begin to fall, one by one. This is what happens when you liberate the productive forces: you can only control their development if you keep abreast of society as a whole.

At its next congress, the Communist Party will have an opportunity to clearly define the country’s course and to take the lead. To do this, one need know where things are heading and advance as quickly – or more quickly – than the rest of the troop. Otherwise, you end up in the rearguard.

While the government continues to assess and test wholesale markets for the self-employed, Cubans are importing containers to supply the growing domestic market.