After the first general elections in Turkey in June 2015, some 186 people have died (44 of them children) as a result of the the violence promoted by government’s forces 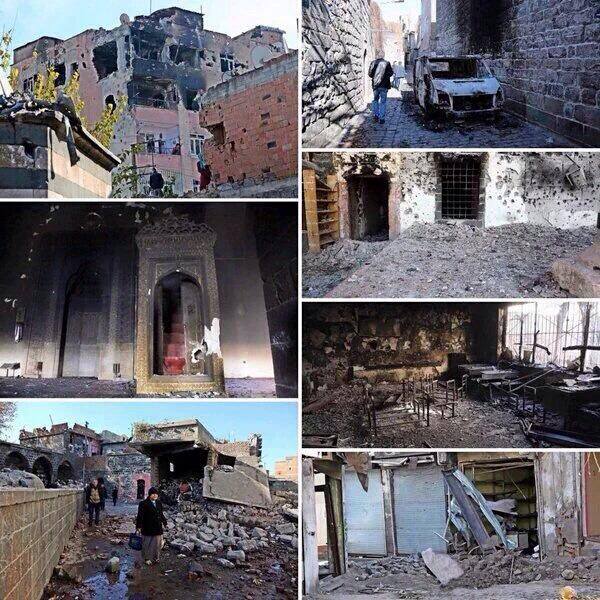 After the first general elections in Turkey in June 2015, some 186 people have died (44 of them children) as a result of the the violence promoted by government’s forces. On November 1 a second election took place, as President Recep Tayyip Erdogan didn’t like the outcome of the first and, simply ignoring basic democratic rules, got the AKP government to call for a new election. Between the first and the second election terror reigned. Many cities in Kurdistan have been put under curfew, army and police indiscriminately attacked pacific marches and demonstrations. Hundreds were arrested, many were forced to flee their homes. The Union of Sotheastern Anatolia Region Municipalities (or GABB in its Turkish version)  underlines that since last August people’s assemblies in many Kurdish cities and towns voiced their demand for self- governance, aiming at achieving through peaceful and democratic means a decentralised government. In Cizre, Sur, Silvan, Nusayibin, Dargecit, Silopi and Yuksekova the Turkish government has imposed a curfew while security forces attacked people protesting peacefully. Bodies of those killed by security forces have not been allowed to be buried. In the silence of the world, once again the Kurdish people is being massacred. Thousands had to flee their homes, as a result of clashes erupted between state forces and Kurdish guerrillas and armed resistance. Even historical buildings have not been spared: the 16th century Kursunlu mosque and Pasha Hamam in the Sur district of Diyarbakir (recognised by UNESCO as world heritage).

As of 21 December five towns were still under curfew (all together 18 towns had curfew imposed on them for weeks). Tanks and heavy weaponry are being used by Turkish Armed Forces all over Kurdistan. According to figures provided by Turkish state authorities, 10 thousand soldiers have been deployed to the city of Sirnak alone, while 5 thousand soldiers are expected to be deployed in the same area before the end of the year. The National Education Directorates in both Cizre and Silopi have called on teachers working on these areas to leave, as their safety cannot be guaranteed.

GABB provided the following information on cities under curfew:

Cizre (Sirnak): curfew has been imposed 5 times since the summer. 39 people died since July 2015 (7 during the curfew).

Silopi (Sirnak): curfew has been imposed 3 times since the summer. 25 people died since July 2015 (10 of them during the curfew).

Nusayibin (Mardin): curfew has been imposed 7 times since the summer.

Dargecit (Mardin): curfew has been imposed twice since the summer.

GABB also provided some information as to the dead during this new phase of the conflict in Kurdistan. As of 10 December a total of 400 people (Kurdish guerrillas, soldiers and policemen) were killed. On 10 October 100 people were killed in a bomb attack in Ankara. The explosions occurred during a Peace March. Prior to that, on 20 July,

33 people were killed in another attack targeting socialist youths in the city of Suruç (Urfa). On 1st August 8 civilians from the village of Zergele, were killed as the result of an attack by Turkish warplanes on Qandil Mountains.

The photos we are presenting were taken in Sur (a district of Kurdistan “capital”, Amed-Diyarbakir). Here curfew was imposed 6 times since the summer. Ten people died in the area since July, 5 of them during the curfew.