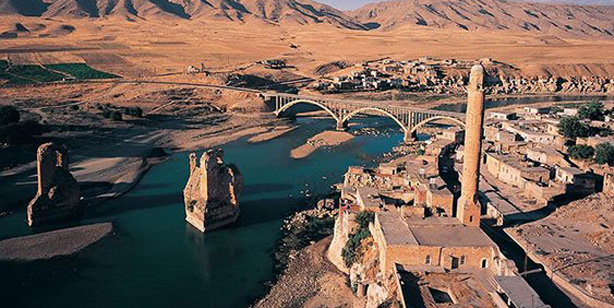 The Turkish Parliament, on Thursday, has passed into law a bill that allows a dam and hydroelectric power plant (HES) that will submerge the ancient city of Hasankeyf (in the province of Batman, Kurdistan) to go ahead. The city is renowned for its bridge, caves and a history going back 12 thousand years.

The Il?su Dam and hydroelectric power plant project will submerge Hasankeyf under the Tigris River, which runs through the town’s center.

A Cabinet decree regarding the transfer of families affected by the project was released on May 5, 2015 and went immediately into effect. According to the statement, expulsed families will have evacuate their current homes and move within 30 days of the construction of their new houses in the new Hasankeyf settlement being completed. The statement also said that those who do not vacate their houses in the given time will be evacuated by the office of the governor of Batman. It was also stated that the cheapest government-built housing in the new Hasankeyf settlement that will host the town’s displaced citizens will be sold for at least TL 54,000 (around $20,000), a figure that excludes the price of the land on which the building will sit. The government-managed Housing Development Administration of Turkey (TOK?) is in charge of the housing project.

The Ilisu Dam project has been exposed by environmentalists all over the world. A huge campaign has run for years to save Hasankeyf. Indeed the project was halted a number of times, and some of its international construction partners had pull out of it, a victory for the citizens and environmentalists. Yet,

Speaking out against the decision left and pro-Kurdish Peoples’ Democracy Party (HDP) Batman deputy Mehmet Ali Aslan stated that it is against the Constitution to allow the dam project to go ahead. Aslan pointed to Article 63 of the Constitution, which states, “The state shall ensure the conservation of historical, cultural and natural assets and wealth, and shall support and promote measures towards that end.”

On the same tone, Republican People’s Party (CHP) deputy Gülay Yedekçi said: «What makes Hasankeyf be categorized as a first-degree environmentally protected site is its caves, the historic [Hasankeyf] castle, its houses of worship, the tombs of our ancestors and many other historic artifacts waiting to be unearthed in excavation projects that have not yet been finished. It is not possible to relocate the thousands of caves that will be submerged”. And he added that: It’s a crime against humanity to submerge Hasankeyf, which meets nine out of 10 of UNESCO World Heritage Site criteria. Twelve thousand years of history shouldn’t be sacrificed for a dam that will last for 60 years».

Hasankeyf, with a population of some 3,271 people according to the last census, is a small and pleasant place, easily reachable by road from Batman and Midyat. The ancient city overlooks the Tigris River and was once a major intersection on the Silk Road.

The city has seen a succession of civilizations come and go. Hasankeyf was of strategic importance both for the Byzantines and the Sassanids, who fought for the control of the region during the third century. The Great Palace on the citadel was likely built to protect the Byzantine Empire from the Sassanids. Muslim armies probably took the area in 638. With the Artukid reign from 1101 to 1232, Hasankeyf reached its apogee and became the capital of the Artukids of Hasankeyf.

In 1232, Hasankeyf was taken over by the Kurdish Ayyubid dynasty and was ruled by al-Kamil, a nephew of Saladin. The city was captured and sacked by the Mongols in1260. In the second half of the 15th century, Hasankeyf came under the influence of the Akkoyunlu (White Sheep Turkomans), who constructed two tombs here. The Ottomans penetrated the region in the first quarter of the 16th century, by which time Hasankeyf was in slow decline.

According to the Sheref Nameh, written by the Kurdish noble fierefxanê Bedlîsî also known as Sharaf Al Din Bitlisi, the place was given its name after an event which involved an Arab prisoner who asked for one last wish to be granted before being executed. The man, named Hasan, asked for his horse to be brought into the citadel so he could ride him one last time. The guards agreed and the horse run such a distance that Hasan managed to escape into the waters of the Tigris. His horse, though did not survive. Hasan’s fellow prisoners who had watched him escaping shouted “Hasan, keif?” (“Hasan, how could you?”).

Ottoman archives describe Hasankeyf as a city of cave dwellings with two caravanserais and four mosques. The cave dwellings, either natural cavities pockmarking the surrounding cliffs or dug out of the calcareous rock, have been inhabited for some 3000 years and there are no fewer than 4000 of these, some of them are still in use.

But with the advent of the Turkish Republic, the cultural heritage of Hasankeyf was forgotten and in 1954, when plans for the Ilisu Dam as part of the Southeastern Anatolia Project (GAP) were announced, most of the inhabitants left, though construction works were delayed for years, also thank to the protests.