Sanders wrote to Thatcher about 1981 Hunger Strike in Long Kesh 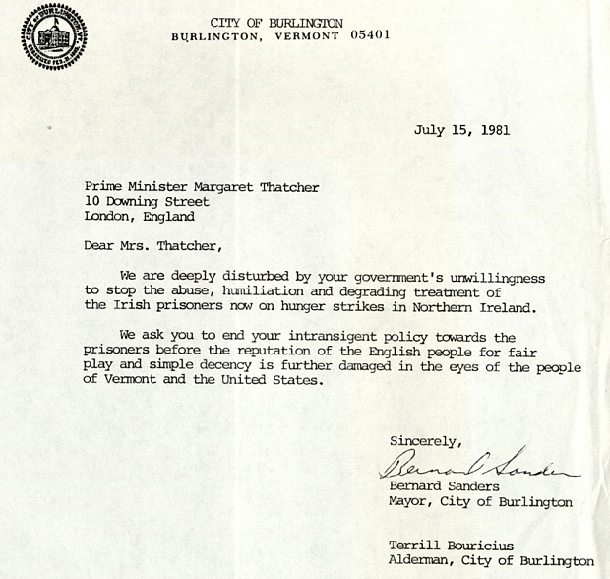 A letter in the political archive at the University of Vermont reveals that US presidential candidate Bernie Sanders wrote to British Prime Minister Margaret Thatcher in July 1981 – while then Mayor of Burlington City – calling on her to end her intransigent stance towards the Irish hunger strikers in Long Kesh Prison.

“We are deeply disturbed by your government’s unwillingness to stop the abuse, humiliation and degrading treatment of the Irish prisoners now on hunger strikes in Northern Ireland,” Sanders told Thatcher.

The letter was penned just two days after the death of the sixth Hunger Striker, Martin Hurson. The 24-year-old IRA Volunteer had been on hunger strike for 46 days.

It also came two days after People’s Democracy Councillor for Belfast City Fergus O’Hare had spoken to Burlington councillors on the conditions and demands of the republican prisoners in Ireland.

“We ask you to end your intransigent policy towards the prisoners before the reputation of the English people for fair play and simple decency is further damaged in the eyes of the people of Vermont and the United States,” Sanders concluded in his letter.

Thatcher’s attitude towards the Hunger Strikers galvanised world opinion and saw protests against Britain and marches in support of the republican prisoners across the globe – particularly in the United States and mainland Europe.

Four more Hunger Strikers would die before the protest ended.