Home > Magazine > Right to Decide > Right2Change – A time for change

Right2Change – A time for change

February 26thcan be a historic game changer for politics in this part of the island. It offers a stark choice between the old self-serving politics of cronyism, corruption and looking after the golden circles and elites, and a new politics that is accountable, transparent, people centred 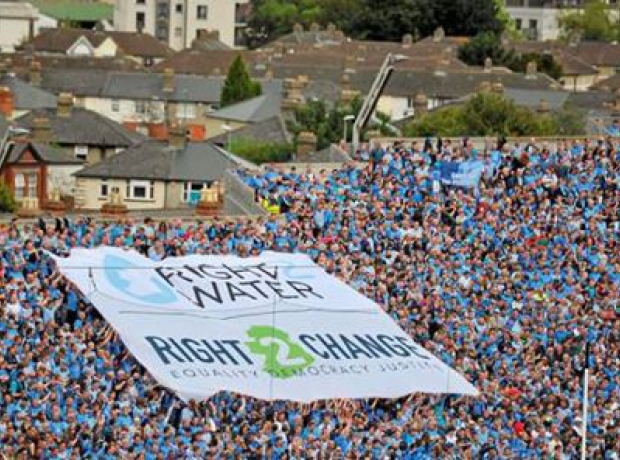 This column comes to you from Dublin, via Kilkenny, via Clonmel, via Cork City, Tipperary and before that Limerick and Birr. It was the second week of the election bus. It has put in some miles and so have we. And some of those miles have been on rocky and bumpy and twisty roads. There have been a few green faces among the backroom team especially when their laptops take flight.  Their stomachs sometimes follow. Especially RG’s.I have lost track of what election ‘Day’ this is. Is it Day 15 or Day 16 or Day 17? Of course, the ‘Day’ that really matters is Friday week, February 26th. That’s the peoples’ day. That’s when citizens in the 26 counties can shape the direction of this state, and of this island, for the next five years.

It’s been a busy time since the Taoiseach finally brought an end to the phoney electoral contest and set the election date. I suspect he’s now rueing the decision not to call the election last November when the polls where kinder to Fine Gael.The general media view is that the government parties calculated that they needed a wee bit longer to help Labour lift itself out of the political doldrums where its opinion poll numbers had been stuck for months. It doesn’t appear to have worked out like that. I said last week that I expected Labour to be trounced in the election and nothing I have seen since then has changed my mind.

The problem for Labour is that many people knew what to expect when they voted for Fine Gael and Fianna Fáil. But despite the experience of recent decades there was still a section of citizens who believed Labour when it claimed it would only go into coalition with Fine Gael to protect low and middle income and working families. They feel betrayed, let down. The palpable anger at Labour for breaking its 2011 electoral promises, and its enthusiasm for, and defence of the conservative austerity agenda, is now coming home to roost.When during the RTE leaders’ debate Labour Leader Joan Burton called on progressive voters to vote for Fine Gael there was an audible groan. How can progressive citizens vote for a pro-austerity and conservative party? The party that Connolly founded has sunk to a new low.

For its part Fine Gael has resorted to scare tactics. They sent off some of their key party strategists to London to speak to Cameron’s strategists to learn from last year’s British election results. The result is a strategy largely based on fear – a vote for anyone else but them is a vote for chaos.The problem is that the chaos in the health system and the rise in homelessness and the mean spirited cuts to welfare supports were taken by Fine Gael and Labour.

But what these parties can’t avoid is that for the first time since partition there is now the real possibility of electing a progressive government in this state.The leaders debate from Limerick University Concert Hall has helped bring a focus to this with the three establishment parties of Fine Gael, Fianna Fáil and Labour (with Renua bringing up the

rear) in the one corner and the left parties in the other.

Some months ago Sinn Féin signed up to the Right2Change campaign and to the principles that it embraces. One hundred and one of the candidates in the election are part of this. Right2change has its roots in the hugely popular Right2Water campaign that emerged after the introduction of water charges.

It is supported by Unite, the Communications Workers Union and Mandate and many community groups, independents and political parties, including Sinn Féin.

Essentially its objective is to provide a left alternative to the cosy smug consensus of the establishment parties – the three Amigos of Enda, Joan, and Micheál. To that end those who are part of the campaign have agreed ‘Policy Principles for a Progressive Irish government’.

Right2Change ‘seeks a fairer, more equal Ireland that benefits all of the people rather than a select few’. It includes at the heart of its programme the 1916 Proclamation: “The Irish Republic is entitled to, and hereby claims, the allegiance of every Irishman and Irishwoman. The Republic guarantees religious and civil liberty, equal rights and equal opportunities to all its citizens, and declares its resolve to pursue the happiness and prosperity of the whole nation and of all its parts, cherishing all of the children of the nation equally…”

The Right2Change principles outline a new vision, a different choice and a realistic alternative to the politics of the past and the establishment parties. It provides the opportunity to end the domination of Fianna Fáil and Fine Gael. Elements of the conservative media have been busy trying to spin the yarn that the election is ‘boring’. The truth is very different.

In my travels across this state there is a clear desire for change. For new politics.

February 26thcan be a historic game changer for politics in this part of the island. It offers a stark choice between the old self-serving politics of cronyism, corruption and looking after the golden circles and elites, and a new politics that is accountable, transparent, people centred. As their poll numbers have dipped Fine Gael and Labour have intensified their negative politics. Expect more of this before Friday the 26th. So, this is not a time to lose focus. In this centenary year of the Rising we have the opportunity to begin the process of building a real Republic, a genuine all-island, 32 county Republic where people are citizens, not subjects. The message is simple. More of the same, or a government that delivers on the promise of the 1916 Proclamation.

And if you have the time why not come to the Right2Change – Right2Water rally in Dublin this Saturday at 2pm kicking off at Parnell Square.