The Ghost of Brecht

propelling us into a future to which our backs are turned, even as we are forced to witness, and make sense of, the catastrophe of the promises of that century we have now, truly, left behind… 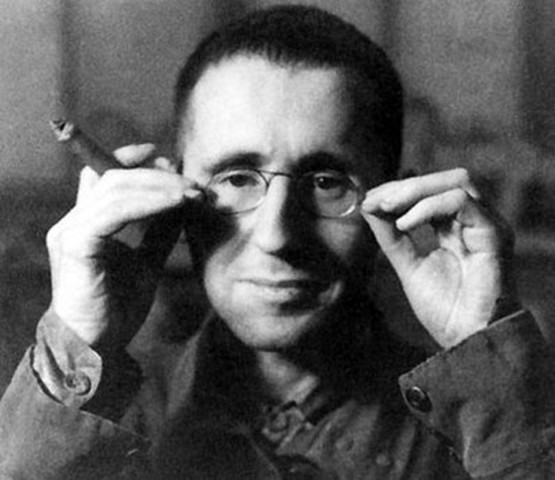 So long now has our revolution passed, (if ever you could say it had finally arrived,) that not only have all our heroes died but every grand notion from heroicism to pure evil, seems to have been commodified and offered for sale on the Main Street..?

So we live in a brave new-world-order (with about as much disorder as the dark ages) made more brilliant by our illusions and this western thing about «every day in every way life gets better and better» as I was told small children were taught to sing in the elementary schools of South Carolina in the 1940’s.

Benjamin, that lost intellectual who led the life of a great poet and died accordingly on the fascist French-Spanish Border in the Autumn of 1940, warned us in his last writing[1] that this notion of history rolling forward into the world of “better and better” is not only a fallacy but a monstrous danger sucking humanity into a bottomless delusion where all possibility of fighting back – of resisting – will be eradicated – our angel of history (his angelus novus), this 2-headed angel, is instead, hurtled into a future with the winds of progress piling ruin upon ruin even as we pass:

«A Klee painting named Angelus Novus shows an angel looking as though he is about to move away from something he is fixedly contemplating. His eyes are staring, his mouth is open, his wings are spread. This is how one pictures the angel of history. His face is turned toward the past. Where we perceive a chain of events, he sees one single catastrophe which keeps piling wreckage upon wreckage and hurls it in front of his feet. The angel would like to stay, awaken the dead, and make whole what has been smashed. But a storm is blowing from Paradise; it has [2]got caught in his wings with such violence that the angel can no longer close them. The storm irresistibly propels him into the future to which his back is turned, while the pile of debris before him grows skyward. This storm is what we call progress..»

And so it seems the ‘storm’ of this new century rolls on with no heroes but with a craving for a meaning that every age has had and with a refined industry now to manufacture the smoke and mirrors to give temporary shape to its realisation: I am thinking, here, of course, of television, and the landmark finale of 6 years of Downton Abbey, an award winning piece of British TV drama which mingles all the high art of contemporary production values with the popular medium and whose recent ending made it into the news headlines.

Why do i draw attention to this? If only because lying in bed, sick as a dog, and viewing the panorama of more than one battle lost from that grand but humble position of illness, I thought back on the many battles that had been fought – not just the wars and the murder and the bloodshed (whether in Belfast, or Bolivia, Bagdad or Beirut) but those other battles that raged for a century between Left and Right and the Left’s persistent vision of a different world, a ‘new’ world, that George Steiner pointed out, peculiarly enough, seemed to draw passion from an inordinate number of world class artists (in his book ‘Language & Silence’[3]) – battles – if only in the realm of ‘theory’ (and not ‘practice’) that now appear to have been rendered so irrelevant that if you were not involved in the commodity of violence in our struggles of the 20th century you might be fooled into thinking your existence itself was merely an illusion, with  no substance, or depth or even a third dimension…a dream at best, meaningless at worst.

And in the middle of these reflections I returned in spirit to a small piece of knowledge from a man who is dead about the same amount of time I am alive: Bertolt Brecht, who died on August 14, 1956, of a heart attack: «Show that you are showing» – Brecht once wrote – and I remember, in the Life of Galileo, many years ago, realising that things can be one way or the other but if you can penetrate through the ‘glass darkly’ then, perhaps, some truth can be seen and demonstrated: and was that not one of the roles of theory or, at one point, of our proposed praxis…

GALILEO : By that time, with any luck, they will be learning

that the earth rolls round the sun, and that their

mothers, the captains, the scholars, the princes, and

the Pope are rolling with it.

ANDREA : That turning-around business is no good. I can

in the morning and goes down in a different place in

the evening. It doesn’t stand still – 1 can see it move.

GALILEO: You see nothing, all you do is gawk. Gawking is

not seeing. (He puts the iron washstand in the middle

(ANDREA sits on a chair. GALILEO stands behind him.)

Where is the sun, on your right or on your left?

GALILEO: And how will it get to the right?

ANDREA : By your putting it there, of course.

GALILEO: Of course? ( He picks ANDREA up, chair and all,

and carries him round to the other side of the washstand.)

Now where is the sun?

ANDREA: On the right.

GALILEO; And did it move?

GALILEO : Of course. The chair is the earth, and you’re

Watching Downton Abbey recently I felt his very-out-of-place presence in the sick-room, which was strange enough as I have always thought the Irish personality and the German socialist one of Herr Brecht’s must be at least 2 worlds apart. But every moment I followed the twists and the curves of this fictional ‘dinosaur’ British family from an era of empire that a lot of us Irish find not only patronising and offensive but downright murderous and genocidal (which Brecht in the 30’s was so quick and eloquent in writing about), wanting to give Edith a hug or advice to Barrow or even a slap here and there where deserved, moving effortlessly between the servants’ quarters and the concerns and troubles of the aristocrats upstairs, how powerful the medium! How powerful the almost-unconscious human wish to identify with our fellow species-members in both their joy and their sorrow and in our own solitary illusion of belonging…

That this identification is about as far from Bertolt Brecht’s verfremdung, (his ‘alienation’, ‘distancing’ or ‘estranging’ ‘effect’,)  should be (or could be?) of relevance this time of the century when the Irish ‘State’, long or usually locked in backrooms counting other peoples’ money or paying it out to foreign banks or doing anything with it other than creating the socialist state we dreamt of and fought for 100 years ago, now gets ready to roll the drum on 100 years of the Irish Liberation Movement – not that they are going to call it that, but they («THEY») know 1916 has to still be in the popular mind as an ongoing site of historical meaning even where the growing consensus is that we will, of course, «take the money» anyway but nonetheless the right noises must be made about these patriot men and women If only to distinguish them from the modern socio or psycho-pathic version.

So to keep my story short and to the point, having wept over the death of Isis the dog, the death of the lovers, laughed over the  children, the parties, the trysts and generally learned over the course of 6 crammed together new-age-order-television-seasons to take a deep and somewhat pompous imperialist breath and breathe in (and out) the responsibility of the British aristocrat:

…asking me in all quiet simplicity to tell, without all the baggage of psychological theories or my own personal neurosis,  how an Irish working class socialist from the 20th century could embrace with arms  so wide and heart boundless the fate of this corrupt, murderous, parasitic and now dying species..!

How powerful this medium of so-called entertainment – television! My party application (unposted, though with no fear of being shot now, East or West, since the Wall fell) thrown away, my historical experience erased, my personal history, of poverty, of discrimination, of violence and alienation, all numbed now with this subtle anaesthetic,  the-(imaginary)-world-in-order for the space of 52 minutes….

And so I realised – this is , truly, the 21st century, truly a brave if not a silly new world, with the likes of Engels and Eleanor Marx truly in their graves, not just watching the antics of the Blairs of British Labour speak on behalf of ‘the British working class’, but more maybe to the heart of things:

what have we lost that we no longer fight and argue over things’ like the value of a poem, the worthlessness of a pop star, and the seduction of this television window where somehow we all end up speaking the same language, and if it happens to be of human decency between races and classes and individuals, as Baron Fellows of West Stafford naively suggests in ‘Downton’, well and good, but if, perchance not, if Benjamin was correct and it is a storm that is «blowing in from Paradise»:

They say to me: Eat and drink! Be glad you have it!

From the starving, and

My glass of water belongs to one dying of thirst?

And yet I eat and drink.

TO THOSE BORN LATER

..and so my ghost left me in my narcotic womb-like fog at this dead-end of our History as oppressed people, with the inexpressible sensation lingering like the smell of good cigar smoke that so much needs to be done, including the need to start our questioning all over again, unfortunately by those who can see so little, and who now as socialists find ourselves on a stormy sea with no navigator at the helm…..and this storm…propelling us into a future to which our backs are turned, even as we are forced to witness, and make sense of, the catastrophe of the promises of that century we have now, truly, left behind…

[1] Theses on the Philosophy of History

[3] “One of the striking differences between Fascism and Communism is this: Fascism has inspired no great work of art. With the possible exception of Montherlant, it has drawn into its orbit no writer of the first rank. (Ezra Pound was no Fascist; he used the occasions and trappings of Fascism for his own quirky economics.) Communism, on the contrary, has been a central force in much of the finest of modern literature; and personal encounter with Communism has marked the consciousness and career of many of the major writers of the age. Why this difference? No doubt, Fascism is too vile and scurrilous an ideology to produce those charities of the imagination which are essential to literate art. Communism, even where it has gone venomous, is a mythology of the human future, a vision of human possibility”