IRISH ELECTION UPHEAVAL, 2. NO GOVERNMENT. Anyone Notice Any Difference?

The only prospect for stable government here is, unfortunately, a coalition of Fianna Fáil and Fine Gael, the two main right-wing parties since the foundation of the Irish state 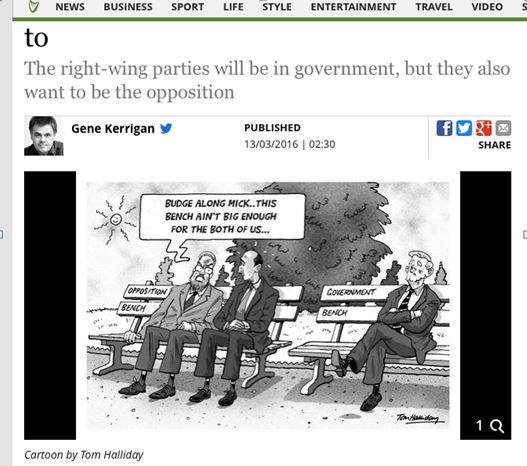 Since the recent election here, almost one month now has passed; we have lived with a ‘caretaker’ government that doesn’t seem to do much governing and spends most of its time trying to add one and one to make 79.

The fact as everyone knows now, and the figures reluctantly show: The only prospect for stable government here is, unfortunately, a coalition of Fianna Fáil and Fine Gael, the two main right-wing parties since the foundation of the Irish state. This, so far, has been vehemently and categorically rejected as a option.

The historical change that this represents was summarised by Gene Kerrigan in a recent article[i]:

“Consider this. From 1932, F(ianna) F(áil)  and F(ine) G(ael) had total control of the Dáil. FF could usually rule alone. When necessary, Labour could be relied on to prop up FG.One right-wing party controlled government, the other controlled the opposition. Their differences were personal, tribal, stylistic, matters of detail – the differences existing within any large party. Essentially, we had one-party government, comprising two wings of the same party.

From this stagnancy came a society riddled with corruption.”

In the meantime and while we wait, we have endless media reports of the negotiations that are no negotiations, and talks of reforming the parliamentary processes (which themselves are probably as meaningless as the other talks).

The only verdict may well turn out to be, once again, that Irish people need to go back to the ballot box and “get it right this time”. This stirs memories of the referendum here on the Lisbon Treaty in June 2008. 862,415 Irish voters, 53.4% of the electorate, voted against ratification of this EU deal, in the June  referendum. However, after the Government stamping its foot, the amendment was approved in the referendum rerun in October 2009 and the treaty ratified.

My question is: in this possible ‘re-run’: who are we expected to offer a majority to in the interests of stability?

As Gene Kerrigan writes,both major parties and their small-time ally, The Labour Party, have now apparently lost their credibility after nearly 100 years of rule or misrule, if we look at how the vulnerable in our society have lived over this period and the difficulties wehave had in enacting any radical measure of social distribution or social justice.

A recent suggestion, by an ex-Fine Gael TD,was that a ‘Programme of Government’ be agreed by “a coalition ofconstructive TD’s” (probably meaning right-wing,) as the Left (if we include Sinn Féin here) has made substantial gains. One way or the other, they will have to do something.

This hiatus, I feel, is a significant moment for those of us committed to a more radical system of democracy and distribution of wealth and resources in our society:

1          We notice that without this ‘Executive of the Modern State’ meeting on a daily basis, we seem to be getting along quite all right. What works works, what didn’t work is still not working (like our hospital system); but it didn’t work either with the right wing government before this one.

Does that not give us an example that a move towards less centralization and a more participatory form of governance would work, if we on the Left could articulate it and develop our strategy towards processes and institutions ofparticipatory democracy?

2          …But probably more pragmatic from the old class-struggle point of view: is it not time now for the Left to come together, utilising the concept of the Broad Front, to develop our own ‘Programme of Governance’, agreed by all those currently in the Dáil who take the needs of Irish people and not profit nor foreign nor local corporations, as crucial?

In the meantime, we, the simple people, just go about our business, looking after those we are lucky to be able to care for, as best we can, and making do with the various crumbs that are thrown from the table by those with the power, wealth and resources to transform our world for the better, both locally and globally.

While we continue to wait…