See you on the Falls Road on Sunday – Easter 1916 Centenary

In 1966 Nelson’s Pillar was blown up in O’Connell Street in Dublin. It was a hugely symbolic and largely popular act 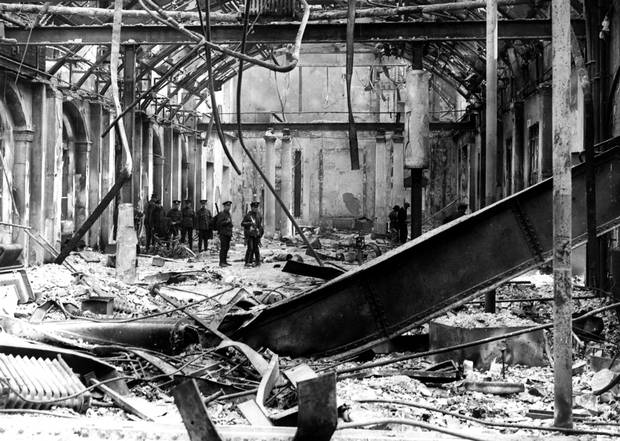 In 1966 Nelson’s Pillar was blown up in O’Connell Street in Dublin. It was a hugely symbolic and largely popular act which took place four weeks before the 50th anniversary celebrations of the 1916 Rising.

A group of Belfast teachers responded by producing one of the most popular songs of the period – ‘Up went Nelson’ – which stayed at number one in the Irish charts for eight weeks.

Four weeks later I was one of thousands in Belfast who took part in the Easter 50th anniversary of the Rising. It was one of the biggest commemorations ever held in the city. The Falls Road was packed with marching men and women and thousands more lined the route to the republican plot in Milltown cemetery. It was a formidable expression of solidarity with those who had participated in the Rising and a manifestation of the determination of Irish republicans to continue the struggle for Irish freedom and independence.

This Easter Sunday history will be made as Belfast republicans follow in the footsteps of those who walked the Falls Road in 1966. The commemoration will gather at 11.45 and leave Divis Tower at 12.15 pm. It will then make its way to the Republican Plot in Milltown.

It will be a spectacular celebration of 1916 including hundreds of participants in period dress. As in 1966 the parade will be led by an Irish Wolfhound. People in period dress representing the leaders of the rising will led the rest of the parade and will be followed by a full flag bearing colour party in period dress. Other participants will include former political prisoners, the GAA and representatives from many of the local clubs in west Belfast. The families of our patriot dead will carry photographs of their loved ones. And a large delegation from the American Labour Movement will also be joining us.

There will be pageantry from the Brassneck Theatre Company at various locations in the cemetery and on the specially erected stage truck that will be situated at the side of the republican plot.

It’s all shaping up to be an exciting and emotive day. I’m looking forward to it. Belfast is always special at Easter time. The crowds are enthusiastic and the turn-out is impressive and this year promises to be the best in decades.

The centenary of the 1916 Rising will also be marked across the island. Tens of thousands of citizens in towns, villages and cities, at country crossroads, up isolated bóithríns, and in lonely hillside graveyards will gather in every corner of Ireland. Wreaths will be laid, words of pride and honour will be said and the last post and laments will sound out.

In the United States and Canada; in Australia and Britain, and in other locations around the world similar commemorations will take place.

As we participate in these events it is important that we appreciate that those who took part were ordinary men and women who were enthused by the desire for freedom and justice and who went to extraordinary lengths – even to making the supreme sacrifice – to advance those objectives.

Their goal was to undo centuries of colonisation by building a new future; a better future. The astonishing bravery of the women and men who participated in that seminal Rising is a huge source of wonderment and pride a century later.

The more I read of the steadfastness and resolve of the leaders’ who faced death with great dignity and courage I stand in amazement of them.

Many years ago, in 1971, I read ‘Last Words’. It is a remarkable book that contains the last written words of the men who were executed in the weeks after the Rising. 100 years later their words still resonate across the century.

The words and poems of Pearse, the personal letters from those about to be executed to their wives and family, the words of defiance spoken at court martials, stir the heart all of these years later. In his address to the court martial on May 2nd 1916 Thomas MacDonagh spoke of the importance of the Proclamation for its time and ours.

“The Proclamation of the Irish Republic has been adduced in evidence against me as one of the signatories; you think it already a dead and buried letter, but it lives, it lives. From minds alight with Ireland’s vivid intellect it sprang, in hearts aflame with Ireland’s mighty love it was conceived. Such documents do not die.”

1916 was a transformative moment in Irish history. On Easter Sunday we will remember those events and those who participated in them with pride.

See you on the Falls Road on Sunday.