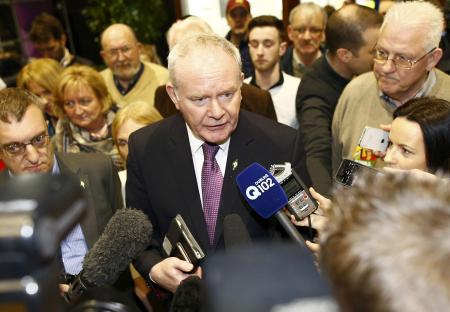 Sinn Fein and North of Ireland Deputy First Minister Martin McGuinness said the Six Counties on the reunification of Ireland if Britain decides to leave the EU. McGuinness believes a commitment to holding a border poll should follow in the event of a ‘Brexit’ following the June 23 referendum in Britain.

Mr McGuinness said Britain’s leaving the EU would be a «political and economic game-changer. Ireland’s place North and South – he added – is in Europe and leading change in Europe».

Sinn Fein has previously campaigned against treaties to accelerate EU integration. Yet party spokesperson Megan Fearon said both parts of Ireland would be better off staying within the European Union. «All sections of our society from agriculture, business, education and the community and voluntary sectors have received practical support, including funding, from Europe,» she explained adding that «The EU has also been a major supporter of the development of the peace and political processes over the last two decades”.

A majority of voters in the Six Counties and in Scotland wish to remain in the EU, but are facing a forced withdrawal due to strong anti-EU sentiment among voters in England. A British vote to leave the EU against Scotland’s will would «almost certainly» trigger another independence referendum there, according to Nicola Sturgeon, leader of the Scottish Nationalist Party.

Provision for a ‘border poll’ in Ireland was written into the 1998 Good Friday Agreement but has never been honoured. McGuinness said the British government should finally allow it to take place in the event of a Brexit.

In the North of Ireland, the Democratic Unionist Party, led by First Minister Arlene Foster, is campaigning for a vote to leave, as is Traditional Unionist Voice and UKIP, the UK Independence Party.
Sinn Fein, the SDLP, the Alliance Party and the Green Party are backing the remain campaign. The Ulster Unionist Party officially declared its support for Britain remaining in the EU but will not force party members to follow its stated line.