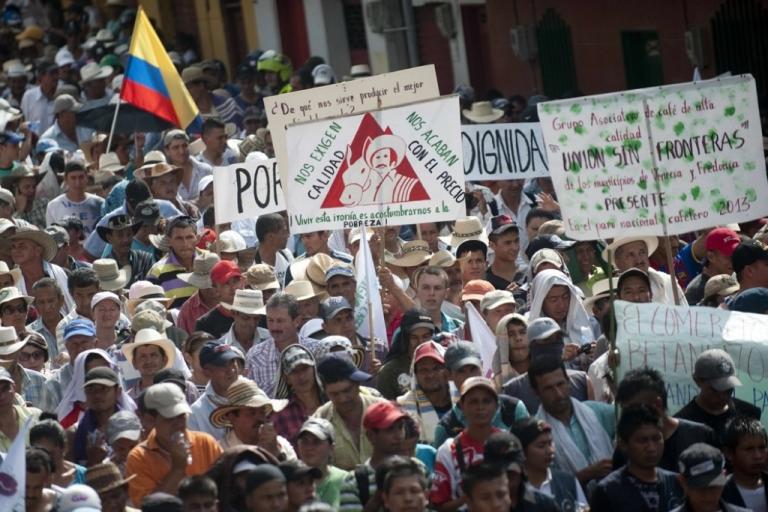 The demands of the peasant sector will be voiced once again on 17 March, when the sector will come to a standstill. They are the same demands peasants have been doing for years and can be summarised in the 8 points the National Government is discussing with the Social Agrarian, Ethnic and Popular Cumbre, in the negotiations which resulted from the big national mobilisation which paralysed the vast majority of the national territory.

Peasant leader Luz Perly Cordoba told Juan Carlos Hurtado Fonseca, journalist of Voz, that “till now we haven’t seen substantial progress and there is an obvious delay on the side of the Government as far as addressing structural issues is concerned”. In particular the issues the government is not willing to answer are: land, collective territories and territorial regulation, an economy contrasting the eviction policy: mining, energy and rural issues; coke, marihuana and amapola fields: political rights, guarantees, victims and justice; social rights; rural-urban relation; peace, social justice and political solution.

For years a monthly meeting is organised between the national Government delegates and the peasants represented in the Agrarian Cumbre. From these meetings, however, no solutions for the agricultural sector have emerged. “There has been exchange of documents and elusive answers and nothing more”, said the campesino leader adding the government “cannot impose on us a model which is the very model which has been destroying the fields. They have to take into account our proposal of a special economy, proper to the rural areas, which would be viable if supported by public policies. To date, however, there is nothing concrete”.

Peasant organisations say the next strike will only be “to warm up” before the demonstrations they are preparing for the remaining part of this year. Furthermore the various members of the Cumbre agree in ensuring that for them the blockade is not just lasting 24 hours, but indeed an ongoing process aimed at putting pressure on the Government. The peasants indeed are preparing a second big blockade later on this year.

In each region of the country peasants are coordinating with trade unions and the rest of the social movement for the 17 March mobilisation, so to guarantee logistic and organisational criteria. “It is not easy for us – says Luz Perly – to mobilise communities, indeed is quite difficult. Yet we are making serious efforts because we know that the 17 of March is going to be a good start in the path towards unity”.