“Havana, Cuba, the Rolling Stones…amazing”. Perhaps the genuine declaration by Keith Richards sums up the feelings and emotions of Friday night 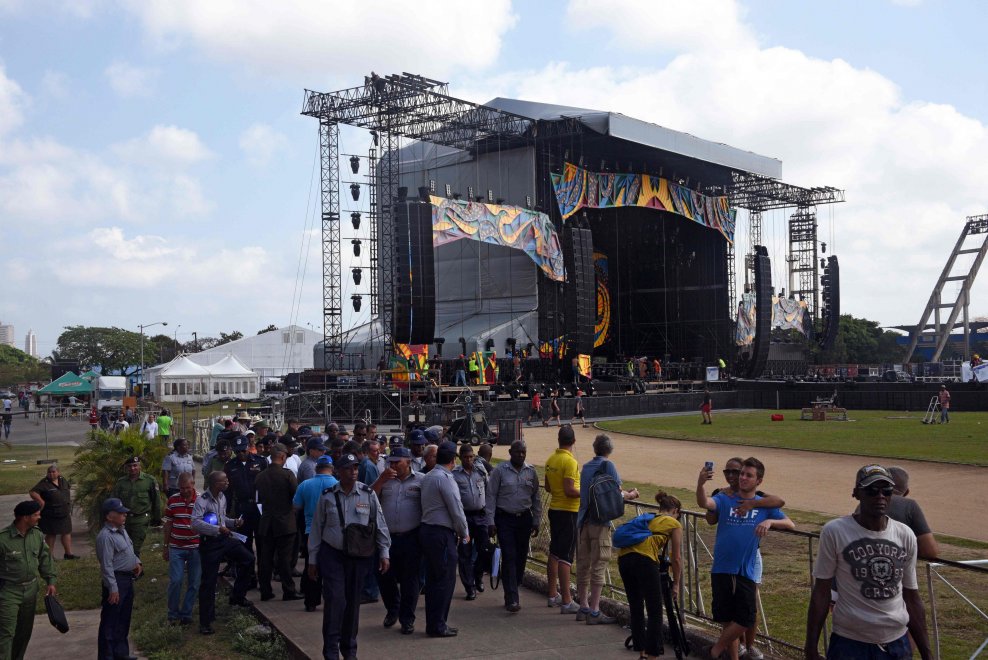 Havana. “Havana, Cuba, the Rolling Stones…amazing”. Perhaps the genuine declaration by Keith Richards sums up the feelings and emotions of Friday night. The hundreds of thousands who flocked to the Ciudad Deportiva for the concert the Rolling Stones were offering to Cuba and its people surely felt the same. For many old Cuban rockers was a dream coming true, for the younger generation it was a bit like discovering an unknown side of their parents.

On the grass a group of rockers well into their ‘50s were sharing memories of the nights in the “Patio of Maria” (Maria’s backyard) the very place to listen rock in Havana in the ‘80s and ‘90s. It was like a happening of old friends. “Is Carlos here?” – enquired a fifty-something woman, wearing a Stones shirt and tight jeans. “Yes, – answered a man, same age, long hair, tattooed arms, a Slipknot t-shirt – he is here with Yusleidy and Lazaro”. Old friends, united by rock.

Rockers in Cuba are a bit of a white fly, it has to be said, which doesn’t mean they are invisible or left no mark on the island’s music scene. On the contrary, there is an important tradition, underground or freaky as they call it themselves. In the past rockers were trying to get their hands on international records when there was no internet and though not prohibited, the diffusion of rock was not facilitated by the Revolution government during the ’70s and ’80s. Likewise it has to be said that this is more of a “Beatles country” (a statue of John Lennon was unveiled in 2000 in a Havana park) rather than a “Stones country”. Yet the Stones have their fans here: Cuban journalist Guille Vilar these days is clearly taking the dust off his collection and using his weekly television program to broadcast every single concert the Stones recorded since they were kids!

The Maxim (which replaced El Patio de Maria) is the old cinema dedicated to rock music in Havana and is being refurbished clearly in view of many new future appointments.

At 8.38pm the video promoting the concert in Cuba and then the presenter: “Ladies and gentlemen, the Rolling Stones”…there they were: on the notes of Jumping Jack Flash the magic four, Mick Jagger, Keith Richards, Ronnie Woods and Charlie Watts made their debut in Havana in front of a delirious crowd.

The impressive stage the band had wanted helped to make the show perfect. The Stones technicians had worked for over a week before the concert to build a stage some 6 meters long and 10 meters high. Lights and a 1300 kilo sound system made the rest, ensuring an impeccable audio, no matter where you were standing. The band had sent 62 containers (plus seventy men) to ensure nothing failed. And everything was as it should be.

“We know it wasn’t easy to listen to our music years back – said Jagger in Spanish – but here we are, playing for you in your beautiful land”.

The Stones went through their most loved repertoire: from “Angie” (for “los cubanos romanticos” said Jagger) to “It’s Only Rock ‘n’ Roll (But I Like It)” and then “Tumbling Dice”, “Out of Control”, “All Down the Line”, “Simpathy for the Devil”.

The four Stones were in terrific shape: Woods and Richards played a wonderful acoustic blues and Jagger danced and jumped all night, age didn’t seem to have touched him.

In the end, after a 2 hours 15 minutes show, the Stones gave Cubans a couple of more pearl: accompanied by the Cuban choir Entrevoces they sang “You can’t always get what you want” and then the gran finale with “Satisfaction”.

“Incredible – said the Cuban rockers – unforgettable!” and it was a feeling shared by all in the audience, old and young.

The concert had been confirmed less than a month ago, after months of negotiations and rumors the Instituto Cubano de la Musica (Cuban Music Institute).

It was Mick Jagger, strolling along the narrow streets of Centro Habana last October, who begun fiddling with the idea of playing in Cuba. The Stones would be on touring Latin America in February with their Olé Tour, so – he said – the logistic of such a concert wouldn’t be so complicated after all. The histrionic leader of the English band got even more engrossed by Havana, after a series of improvised sessions with local musicians. And, so the story goes, talks with the Cuban authorities followed, questions asked, doubts dissolved until the final announcement: the Stones will indeed play in Havana. As announced it was a free concert, called “Concert for Amity”, for the hundreds of thousands who lived an experience they won’t forget.

The concert was not broadcast live due to the band’s image rights but of course it was recorded by the Stones’ team and would be released as special dvd set. Cuban authorities confirmed the national television would broadcast the full documentary made by the Stones’ team.

Friday was no doubt Rolling Stones time. Yet Cuba is breathtakingly popular these days, so much so that dozens of artists have said they want to go and play in the island. Next in the queue are Sting, Earth Wind and Fire, The Police, U2, Dead Daisies (again, as they have already played in Cuba last year) and many others.

We shall see. In the meantime, let the show begin.