Home > Magazine > Talking Peace > IRELAND PEACE PROCESS: THE JOURNEY IS NOT OVER YET

IRELAND PEACE PROCESS: THE JOURNEY IS NOT OVER YET

On 9 April, eighteen years ago, the Good Friday Agreement was signed in Ireland. It took four years for the British and Irish governments, republican and nationalist parties and unionist parties (of the North of Ireland) to reach such an agreement 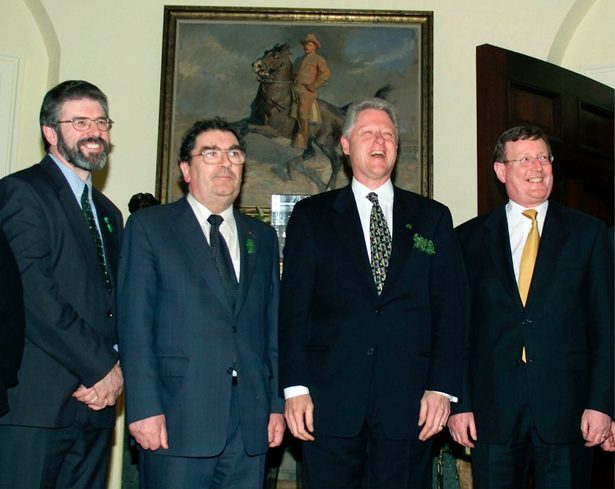 George Bernard Shaw once said: “Some people see things as they are and ask why? I dream things that never were and ask why not?”.

Perhaps this summarise best than most sentences the difference between states (governments) and liberation (guerrillas) movements  when it comes to how to approach and deliver peace.

On 9 April, eighteen years ago, the Good Friday Agreement was signed in Ireland. It took four years for the British and Irish governments, republican and nationalist parties and unionist parties (of the North of Ireland) to reach such an agreement. A very long four years, after the historic announcement by the IRA (Irish Republican Army) on 31 August 1994 to call for “a unilateral and permanent ceasefire”.

Now, eighteen years on, Ireland (the entire island, North and the Republic) is very different. For one thing, a referendum on Irish unity (one of the key-demands for Sinn Fein, the Republican party led by Gerry Adams) seems closer than never. And Sinn Fein itself has been constantly and steadily moving from being a virtually North of Ireland party to become the third party in the Republic of Ireland. Indeed, after last February’s elections, Sinn Fein and the left coalition of parties and movements is part of, have given a further and almost definitive push to the historic dualism in Irish policy. Ireland has no government yet, as the two traditionally rival parties, Fine Gael and Fianna Fail should join ranks and formed a coalition government if they want to avoid new elections. An alliance which is still far from being forged (should it happen it would – and only in the name of self interest and attachment to power – wipe out decades of rivalry between the two parties).

Sinn Fein has been patiently and consistently working both in the North and in the Republic in order to build a consent which is not only around the peace process but also about a vision for the future of a united Ireland.

How much has been implemented of the Good Friday Agreement in these eighteen years ? No doubt the “technicalities” of the agreement have been more or less concretised: the new political institutions, a referendum to emend articles 2 and 3 of the Irish Republic Constitution (the articles claiming sovereignty on the island as a whole), new political and economical relations among the parties (North of Ireland, Britain, Ireland), the dismantling of barracks and army facilities in the North, the establishment of a new police force (partially a success, as for many republican citizens joining the police is still not an issue)…

There is though another side to every peace process, which has to do with building a new shared future. This requires first of all understanding the past, establishing the truth, identifying responsibilities. In other words, it requires justice.

Peace is not simply “absence of war”. Like Nelson Mandela said making peace is putting yourself in the shoes of your opponent.

For States this equals an anathema. For the liberation movements is one of the toughest challenges. Yet it has to be met in order to reformulate and reshape strategies with a better understanding of the “other”, it means building trust. And it is here perhaps where a process (often unilaterally) of inclusion starts. It was the consciousness of the fact that the status quo was not an option that convinced Irish republicans to take the initiative.

For the same reason, because the status quo is not an option, Irish republicans did not stop once the “technicalities” were implemented. From the beginning they wanted to address the more complicated issues, those related to people. Sinn Fein spent a lot of time in promoting and organising initiatives aimed at bringing together the two communities, republican (or nationalist) and unionist (or loyalist). A difficult task, because it involves dealing with wounds not yet healed. It also requires a strong will to establish truth in order to secure justice and, above all, not repetition. This process, the healing process, is perhaps the most difficult one, the one requiring more time and patience. Because pain needs time. Military bases and spy towers can be demolished, but a totally different thing is to break down prejudices, fears and suspicion, which manifest themselves in sectarianism, bigotry and intolerance of anyone who is perceived as different.

In a recent lectio magistrali he delivered at Queen’s University in Belfast, Deputy Prime Minister Martin McGuinness, addressed the issue of reconciliation, which Sinn Fein believes needs to be the next phase of the peace process. “Republicans, – said McGuinness in his speech to the students of Queen’s – seek to help heal the wounds of the past and build a better future. I believe we have already led the way in terms of reaching out the hand of friendship by taking initiatives that demonstrate in a tangible way that we want to share this island with our unionist brothers and sisters. We respect their traditions, their culture and their narrative. And we ask only for that respect to be reciprocated”.

Underlining the importance, for Republicans, of the commemoration of the 100th anniversary of the Easter Rising (soon crashed in blood but which led to the Proclamation of the Republic of Ireland), McGuinness said: “Consolidating and stabilising the peace means that Republicans must understand and be respectful to the key historic events that shaped Unionist culture and identity.  As Republicans we must make a huge effort to engage people from the Unionist community in 1916 commemorative events.  These events must be open and inclusive.  Our words of reconciliation must be matched by our presence at key commemorative events that are important to the Unionist community”.

Sinn Féin launched the Uncomfortable Conversations initiative in March 2012 in an effort to understand and address the genuine fears and concerns of Unionists in a meaningful way.  This, McGuinness said “was recognition that if we are to promote reconciliation then we need to shape an authentic engagement process. This is the central thrust of the initiative”.

The Deputy Prime Minister said that to him “2016 presents all traditions on this island with the opportunity to engage in a new conversation: a conversation that is forward looking and which learns from the past, a conversation that seeks to heal the wounds and division of our past conflicts. Such conversations will be uncomfortable for many as we are collectively introduced to the ideas, thoughts and aspirations of others”.

In November the DUP (Democratic Unionist Party of First Minister Arlene Foster) and Sinn Féin took control of the endless talks process and, recognising their respective responsibilities to show leadership, to deliver for the people, to break the log-jam, they quickly reached agreement on issues that had brought the political institutions to the verge of collapse.

Since the Fresh Start Agreement (as the new agreed strategy was called) there has been a new approach, which Sinn Féin thinks is delivering real results and improved government. “This is – said McGuinness – the approach of agreeing where we can and respecting each other’s perspectives where we cannot, that is the way forward, the way to manage difference and deliver further progress”.

Clearly the journey in Ireland is not yet over: the peace process is still being implemented, as nothing can be taken for granted, as both communities know very well. Working together means building trust and reconciliation, which is, as McGuinness put it “the surest way to put the failures and pain of the past behind us forever”.