The Challenges Ahead – Five for west Belfast 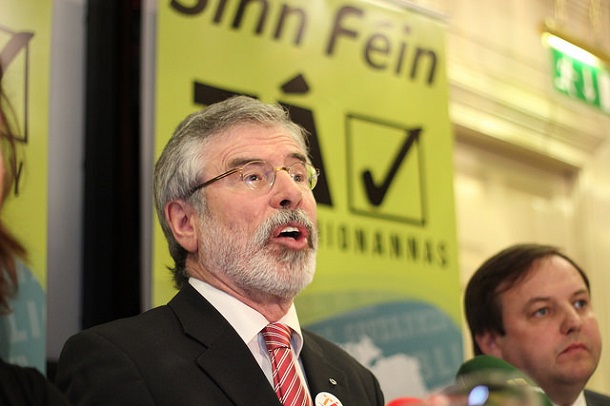 Against the backdrop of a crisp beautiful Sunday morning in Dublin the raised voices of thousands echoed in song along O’Connell Street.

“When boyhood’s fire was in my blood

I read of ancient freemen,

For Greece and Rome who bravely stood,

Our fetters rent in twain,

And Ireland, long a province, be.

A Nation once again!

A Nation once again,

A Nation once again,

And Ireland, long a province, be

Thomas Davis was one of the founding leaders of the Young Ireland Movement in the 1840s and was responsible for some of the best nationalist ballads of that period. He published them in The Nation newspaper. A ‘Nation once again’ is among his best known works and Davis published it in July 1844.Sinn Féin had organised the event to celebrate exactly 100 years from the commencement of the 1916 Rising and Pearse’s historic reading of the Proclamation at the front of the GPO. In bright sunshine Micheál MacDonnacha, dressed as a Volunteer and Lynn Boylann, dressed in the uniform of Cumann na mBán, introduced the many flags associated with the struggle for freedom and these were accompanied by large posters of each of the leaders of the Rsing, including some, like Tomas Ashe who died subsequently on hunger strike.Later Martin McGuinness and I joined tens of thousands of citizens, some dressed in period costume, as we walked from Merrion Square to O’Connell Street. The “Reclaim the Vision” march was a citizen’s initiative organised by among others Robert Ballagh. That too was an inspiring event.The Sinn Féin Ard Fheis on Friday evening and Saturday saw thousands of delegates participate. It was professional, well managed and saw scores of Sinn Féin activists, including many of our new TDs, make thoughtful contributions on over 100 motions on wide ranging issues affecting citizens on this island and internationally.Some in the media described it as ‘lack-lustre’. But then they generally don’t get republicans. They rarely catch the mood or recognise the underlying changes that are taking place. The Ard Fheis reflected a party in transition. An all-Ireland party developing policy for all sections of our people, in all parts of the country. A growing party, with a breadth of membership in terms of geographical spread and age and gender.In the last election we had

23 TDs elected. This week seven Sinn Féin Senators were elected to the Seanad, including Belfast Councillor Niall O’Donnghaile from the Short Strand. That’s more than double what we had previously.Next Thursday May 5th – the anniversary of the death on hunger strike of my friend and comrade Bobby Sands – there will an election to the Assembly.My first ever election was to the Assembly established by British Secretary of State Jim Prior in 1982. It was in the aftermath of the hunger strike and was part of our evolving electoral strategy. There were five Sinn Feiners elected on that occasion on an abstentionist platform and I had the honour to stand for and be elected to represent the people of west Belfast.I am very honoured to have represented this strong forward looking vibrant community.

And in very difficult times the people of west Belfast provided real leadership.On this occasion we have a strong team of five MLAs seeking re-election:Jennifer McCann; Pat Sheehan; Fra McCann; Rosie McCorley and Alex Maskey. It is a tough battle to hold five out of six seats but it is doable.They along with our Councillors and Paul Maskey MP have helped transform west Belfast. This would have been impossible without the support of the people of the constituency. In this centenary year of the 1916 Rising their work needs to continue.Sinn Féin doesn’t take the voters for granted. Our commitment to the electorate is to build on the progress that has been made. To deliver well-paid jobs, especially for our young people.

To defend the health service and to continue the redevelopment of the RVH.

To support business and build safer communities and ensure that our children get the education and opportunities they need and deserve.Of course, more jobs are needed; and more homes; and issues like Casement Park, and La Salle School need ongoing attention.The Fresh Start Agreement too needs fully implemented.Only Sinn Féin candidates are committed to this and will stand up to the bluster of those unionists who seek to attack Irish medium education. We are also the only party committed to the implementation of the rights of citizens, including, worker’s rights, women’s rights, Irish language rights, civil rights, LGBT rights and the rights of citizens with disabilities.The Assembly election provides an opportunity to build on Sinn Féin’s success in the recent Dáil election and to advance the republican goals of the men and women of 1916 – Irish unity and equality. No other local candidates have this objective.This is a big challenge. Our opponents say we cannot get five MLAs elected again. They underestimate the people of west Belfast. On May the west Belfast electorate has the opportunity to take another decisive step forward by voting for the best west Belfast Sinn Féin team and our five candidates.