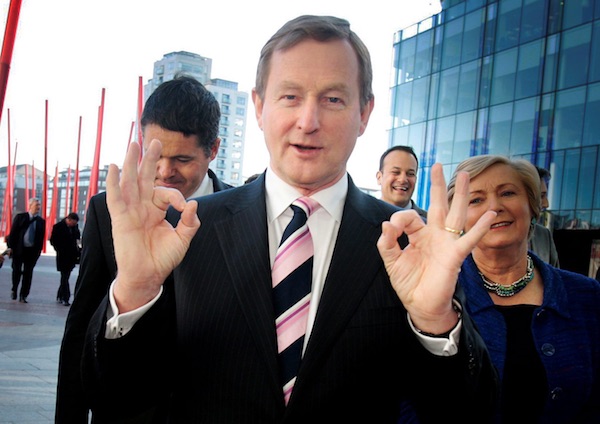 Fine Gael leader Enda Kenny has received the seal of office of  Taoiseach from the President after being re-elected this afternoon with  the help of nine independents and the tacit support of Fianna Fail, who  abstained as part of an historic agreement with their traditional foes.

After 70 days of convoluted negotiations, Kenny won by a margin of 59  votes to 49. In the end, he had the support his own party as well as  five of the six members of the Independent Alliance, two of the five  rural Independent TDs, as well as unaligned Independents Michael Lowry  and Katherine Zappone.

Speaking in the Dail, Mr Kenny claimed that at the heart of a programme  for government agreed with Fianna Fail was a realisation of the  potential of all the people of Ireland. He said it was a «great honour»

to accept his nomination as Taoiseach for a second term.

During his speech Micheal Martin took credit for the postponement of  water charges but added: «Water policy is not the most important policy  facing the country and has taken too much time.»

While criticising the «Enda Dependents» for supporting Mr Kenny, Sinn  Fein’s Gerry Adams noted that many of them «were among the most vocal  opponents of Fine Gael and Labour’s policy agenda».

He described joint Fine Gael-Fianna Fail programme as a «masterclass in  waffle and bluster. No real ambition. No big ideas. No costings. Little  real detail.

«Never was so much negotiated for so long, for so little. Their joint  paper contains a few miserly lines – not even a section – on health.»

He also noted there was no commitment on the construction of social  homes «whatsoever».

«All we have is a reiteration of the haphazard approach to a social,  State-endorsed housing and homelessness emergency that Fine Gael and  Fianna Fail caused in the first instance.

«On the issue of water, which was the main point of contention between  Fianna Fail and Fine Gael, we are told that Irish Water remains and  water charges are merely suspended, completely contrary to the Fianna  Fail manifesto.»

He also noted that the Taoiseach had vowed not to form a government  beholden to Independents.

«Another election promise out the window,» he said. «However long it  lasts, Sinn Fein will fulfil our obligations as the leaders of the  opposition.  And in the interest of citizens, we will hold this  Government – comprising Fine Gael, Fianna Fail and the Independents  propping them up – to proper and robust account.»