Turkish state wants Kurds to make war not do politics

Thousands of youths are joining the guerrilla in the mountains, saying ‘Turkish state has left us no choice other than armed struggle’ 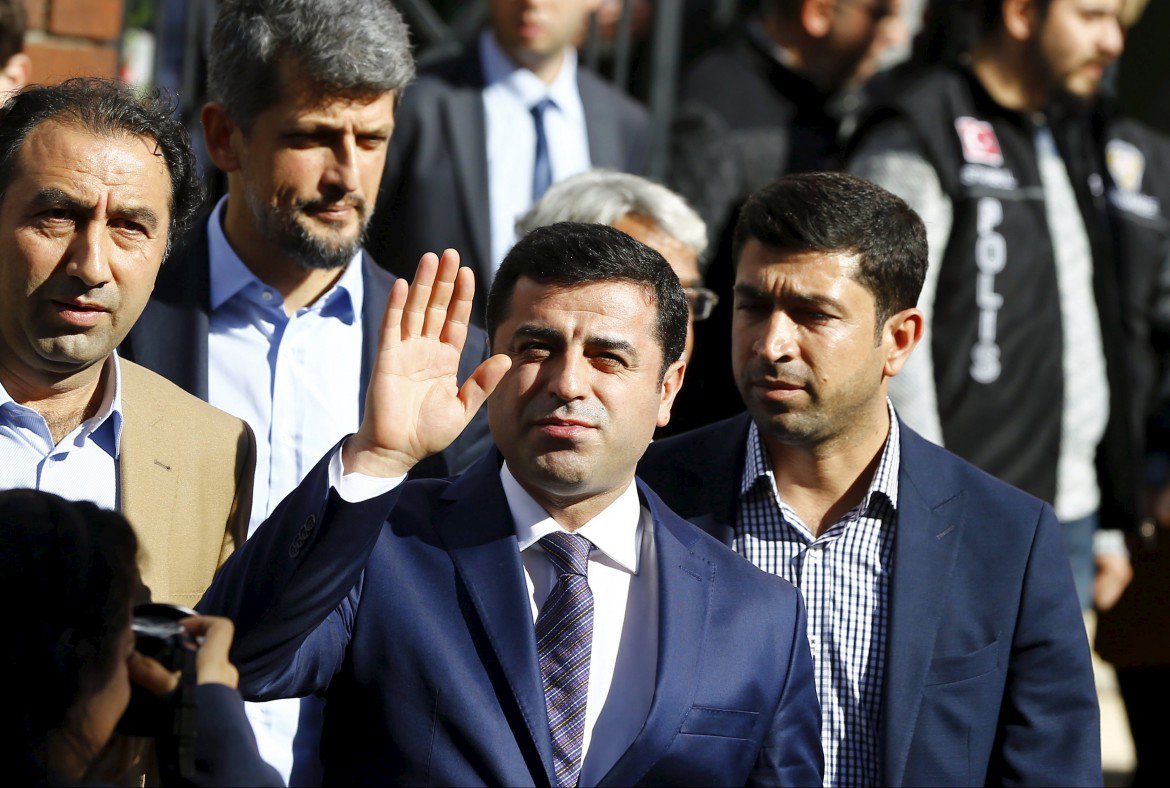 HDP’s attainment of 13 percent votes and 80 seats in the parliament in the election of June 7, 2015 led up to a major strategic transformation. In other words, the success of the HDP, made up of mainly Kurdish candidates, did politically flatten the Turkish state system that denied Kurds. The unprecedented 10 % election threshold that had been imposed by the state in order to obstruct the representation of the Kurds in the Turkish parliament, was thusly exceeded.

Unable to form a government in the wake of this development, the AKP ruling averted a coalition and renewed the election on November 1. Of course, it also started a war against the Kurds during this process between the months of June and November. The AKP later set the stage for the massacres in Suruç and Ankara, imposed quite nationalist and fascist feelings on the Turkish people, and argued that “there will be a chaos without me”. The society was indeed convinced to some extend, or it was forced to do so. Some did vote for the AKP once again, giving it another chance considering these arguments, as a result of which the AKP came back to power. Of course Kurds voted the HDP which represented them, enabling the party to gain 59 seats in the parliament.

Turkish state couldn’t and still can’t come to terms to this level of politics being done by the Kurds. This is the very reason why it spread the already declared anti-PKK war to the cities and murdered hundreds of people, while more than 20 mayors got arrested and thousands of activists were punished. And today, it wants to drive the HDP MPs out of the parliament and tries hard to lift immunities. The ‘legal amendments’ required for the arrest of several HDP officials will be made within the month of May.

Well, what will this development bring along and what will the attitude of the Kurds be like?

Answering these questions requires to go a little back in time.

It was 1991 when the Kurdish movement had just been beginning to gain momentum. More than 20 Kurdish candidates were elected and sent to the parliament. Two sentences in Kurdish voiced by Leyla Zana during the oath-taking ceremony created an earthquake effect. Kurds were pleased with the situation while ‘Turks’ were responsive as they had been told until that time that ‘There is no thing such Kurd’. This process also started a marathon for the legal Kurdish politics.

Three years later, the Kurdish deputies were expelled from the parliament. The then Prime Minister Tansu Çiller was holding speeches just like the ones made by Erdo?an today. Some of the deputies were therewith jailed and some others left for abroad. The imprisoned ones were released 10 years later.

We were yet children during those times. The Turkish state was pledging to ‘inflict a blow on the Kurds by imprisoning Kurdish deputies and driving the PKK put of the parliament’. Kurds, on the other hand, were vowing to ‘enhance the struggle against those not wanting them to do politics’. 22 years have passed since. The Kurdish struggle has multiplied its power, while the Turkish state keeps repeating the same discourses.

And today, they still keep going round in circles. They do not want the Kurds in the parliament and they put this opinion into the code of “PKK out of the parliament”. Let me point out that thousands of Kurds who watched the attack on Leyla Zana’s Kurdish speech and the arrests of 1994 are today fighting the Turkish state in either the mountains or cities, some with arms and some others with politics.

The same thing is happening / will happen now. The AKP-ruled Turkish state is blocking the road to politics for the Kurds and prompting them to resort to various ways of struggle. Kurds are already oriented towards an armed struggle and urban resistance once they are rendered helpless, and this struggle of theirs is being terrorised. The AKP ruling argues that ‘every single thing can be discussed under the roof of the parliament’ but it also points those in the parliament as target and makes an effort to jail them. A total of 75 summaries of proceedings have been filed against HDP co-chair Selahattin Demirta? alone. HDP ??rnak MP Faysal Sar?y?ld?z, on the other hand, was accused of ‘carrying arms’ but the summary of proceedings by the prosecutor says that he didn’t do so. The same prosecutor seeks Sar?y?ld?z’s arrest anyway, considering the HDP MP as potential criminal and doing what is necessary in line with the order given from above.

AKP officials are repeatedly saying ‘We can discuss every issue politically as long as PKK lays down arms’. For this purpose, they asked the HDP deputies to meet with PKK officials and sent letters through them. HDP MPs did so indeed; they met PKK officials and delivered letters to / from them. Yet, the state now asks life sentence for these deputies on the grounds of these talks.

What this means is; PKK shouldn’t lay down arms but wage war and we can end them in the battle. Right, this is the very message given to Kurds today.

And Kurds must have understood this message already as they now call on the HDP deputies to leave the parliament and come home.

Thousands of youths are joining the guerrilla in the mountains, saying ‘Turkish state has left us no choice other than armed struggle’. During the days Erdo?an voiced joy over ‘killing 3 thousand PKK members’ (which is a lie about the numbers), thousands of Kurdish youths were taking to the mountain to join the guerrilla. Whichever way you look at it, this is a dead end for the Turkish state…

At this point it’s worth drawing attention to the fact that Erdo?an wants to be the super president and Kurds, who do not surrender but build a democratic system, constitute the single obstacle to the realization of this intention. Erdo?an wants to be a Sultan and the other anti-Kurdish dynamics of the state consent to a presidential system if necessary, a choice ‘better than Kurds’ presence in the parliament’. There are two reasons for this consent; that a Kurd cannot be a super president anyway, and that Erdo?an ‘shall likely take a back seat several years later’. It is especially the military that is of this opinion. They make a deal with Erdo?an -whom they do not like- for the sake of obstructing the success of Kurds. In short, all the institutions representing the state have made a national alliance based on an opposition against Kurds.

This is also the reason why the AKP, the fascist-charactered MHP and the so-called ‘social democrat’ CHP have voted for the parliamentary proposal aimed at the elimination of HDP.

To sum up, it looks like HDP deputies will be stripped off immunity and some will be jailed, yet they will resist and remain in the parliament to the end. Demirta? has recently given the message that they could form their own parliament in the event of being expelled from the Turkish parliament. It seems the process will evolve into such a case.

The war will unfortunately get deeper as the Turkish state has blocked the way of politics to the Kurds. It will be everyone to lose and suffer in war. Yet, Kurds will never take a step back nor surrender.

Just like the case in other countries around the world, Kurds will attain their rights and this system will be defeated. Whether this will happen in a near or distant future will depend on popular struggle. Still, the struggle to endure during the process from this summer to autumn will determine the fate of the following years.