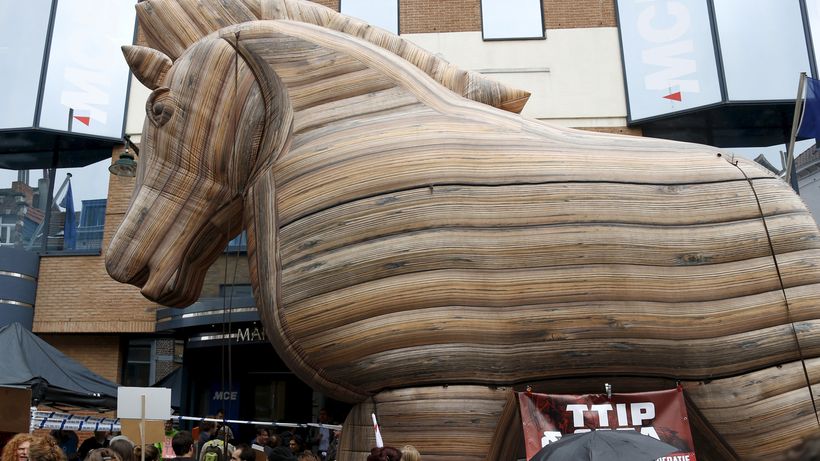 The IUF (The International Union of Food, Agricultural, Hotel, Restaurant, Catering, Tobacco and Allied Workers’ Associations), in its 11th May Bulletin Editorial

[1] has echoed the concern that has been building momentum over the last year or so since the October 2014 and February 2015 ‘Days of Action’ organized against this trade agreement currently being negotiated behind closed doors between the European Union and the United States.

What is the TTIP?

The TTIP is the ‘Transatlantic Trade and Investment Partnership’ – the name given to the current trade negotiations between these two powerful blocks.  The meetings (at present in their 12th round of negotiations) have moved between Brussels and Washington since their inauguration in July 2013 in Washington DC.

The talks are held “mostly in secret” – meaning the content of the drafts of agreement, as well as the reports on the negotiation rounds, are “classified from the public”:

“The contents of the competing proposals as well as of the reports on TTIP negotiations are classified from the public, but after a proposed draft was leaked in March 2014, the European Commission launched a public consultation on a limited set of clauses and in January 2015 published parts of an overview; and subsequently increased security over its secrecy.“[2]

What’s All the Fuss About?

To keep it simple:  the safety of our food and of our environment, our ability to once more begin the process of regulating the banks after 30 years of deregulation resulting in their recent ‘meltdown’, (with the resulting massacre of public services in many countries), and, crucially, each of our government’s ability to govern in the name of the people who elected them.

Whereas this bi-lateral trade agreement, TTIP, is working to reduce “the regulatory barriers to trade for big business, things like food safety law, environmental legislation, banking regulations and the sovereign powers of individual nations.”

“Like the finalized but as yet unratified Trans-Pacific Partnership and the EU-Canada Comprehensive Economic and Trade Agreement CETA, TTIP’s principal objective is to further expand the already considerable power of transnational corporations by restricting the regulatory power of governments and locking the system into place to prevent new regulatory initiatives.”

The British newspaper the “Independent” in an October 2015 article, listed the 6 reasons people should take note of this proposed agreement:

“What is TTIP? And six reasons why the answer should scare you”[3]

1       More privatisation: public services are in the firing line.

“One of the main aims of TTIP is to open up Europe’s public health, education and water services to US companies.”

“TTIP’s ‘regulatory convergence’ agenda will seek to bring EU standards on food safety and the environment closer to those of the US. But US regulations are much less strict…”

“The UK, under the influence of the all-powerful City of London, is thought to be seeking a loosening of US banking regulations. America’s financial rules are tougher than ours. They were put into place after the financial crisis to directly curb the powers of bankers and avoid a similar crisis happening again. TTIP, it is feared, will remove those restrictions, effectively handing all those powers back to the bankers.”

“Remember ACTA (the Anti-Counterfeiting Trade Agreement)? It was thrown out by a massive majority in the European Parliament in 2012 after a huge public backlash against what was rightly seen as an attack on individual privacy where internet service providers would be required to monitor people’s online activity.  Well, it’s feared that TTIP could be bringing back ACTA’s central elements…”

“The EU has admitted that TTIP will probably cause unemployment as jobs switch to the US, where labour standards and trade union rights are lower. ”

“TTIP’s biggest threat to society is its inherent assault on democracy. One of the main aims of TTIP is the introduction of Investor-State Dispute Settlements (ISDS), which allow companies to sue governments if those governments’ policies cause a loss of profits. In effect it means unelected transnational corporations can dictate the policies of democratically elected governments.”

“ISDSs are already in place in other bi-lateral trade agreements around the world and have led to such injustices as in Germany where Swedish energy company Vattenfall is suing the German government for billions of dollars over its decision to phase out nuclear power plants in the wake of the Fukushima disaster in Japan. Here we see a public health policy put into place by a democratically elected government being threatened by an energy giant because of a potential loss of profit. Nothing could be more cynically anti-democratic.”

The Independent goes on to tell us:

“There are around 500 similar cases of businesses versus nations going on around the world at the moment and they are all taking place before ‘arbitration tribunals’ made up of corporate lawyers appointed on an ad hoc basis, which according to War on Want’s John Hilary, are “little more than kangaroo courts” with “a vested interest in ruling in favour of business.”

Numerous campaigns are being organised in Europe to stop this deal going through.

The online European Initiative against TTIP and CETA number of protesters  currently stands at a cool 3,459,045.[4]  British trade unions (Unite and the TUC) oppose the proposed agreement seeing it as the next chapter in the ongoing privatisation of public services. War on Want issued a press release on 2 May this year stating that “recent leaks of TTIP documents spells the end of TTIP”.[5]  Social movements, environmental organisations, anti poverty groups, trade unions, taxi associations, farmers’ organisations, community groups, even musicians and artists,[6] as well as some of the political parties and their political representatives have joined the campaign against the deal. In March this year, French President François Hollande said “that France could not accept a transatlantic trade agreement between the EU and U.S. at the current stage of talks because his country was against what he called free trade without rules.”[7] Caroline Lucas, the former Green party leader and British MP for Brighton Pavilion, “said she believed TTIP amounted to a corporate takeover.”[8]Kirsty Davies, Head of Oxfam Cymru, says: “Oxfam believes that fair international trade is a powerful way of lifting people out of poverty  and is concerned that TTIP could do just the opposite and set new global standards that have a destructive impact on developing countries.”[9] Ireland’s new main opposition party, Sinn Féin says:

“Sinn Féin has huge concerns regarding TTIP from the manner in which it is being secretly negotiated to elements within the mandate which have been forced public by leaks. Our greatest concern is the attitude and position of the Irish government. Ireland lost its veto on these matters with the ratification of the Lisbon Treaty. Therefore we need a strong vigilant Irish position to protect Ireland’s interest. Unfortunately the government seems content to sleepwalk us into another bad deal.”

“…that the proposed (ISDS) court of arbitration and protection of foreign investment would mean a “complete dis-empowerment of politics” and that, regarding labour economics, free trade agreements typically enforce lower standards and that TTIP would put European workers into direct competition with Americans (and in effect because of the North American Free Trade Agreement with Mexicans), which would impact European social models.”[10]

On the environment, Joseph E Stiglitz is quoted on Wikipedia arguing:

“TTIP could have a ‘chilling’ effect on regulation and thus ‘undercut urgently needed action on climate that the Paris agreement requires’. He says that industries that do not pay for the “social costs” of pollution in effect receive hidden subsidies, and that TTIP would give companies many more opportunities to sue governments over environmental protection mechanisms”

“The (TTIP) texts contain much more that is toxic to democracy and the labour movement, and we haven’t even seen the full list of services annexes or the chapters on intellectual property or financial services, all of them instruments for enhancing corporate power. The leaks expose the utter hypocrisy of governments on both sides trying to sell TTIP as an agreement which will respect the regulatory role of the state and guarantee a high level of worker and consumer safety and environmental protection. ”

We can see now that many sectors within civil society in Europe have been working in the past year to develop awareness of and resistance to this Agreement which would appear to be the next chapter in the on-going march of the global neo-liberal regime we have been forced to suffer under since the 1980’s.