Home > Magazine > Works&Capitals > Money Talks To Itself, now, in Ireland…

Money Talks To Itself, now, in Ireland…

The Ulster Bank, on May 25th, announced that is about to sell €875 million of its “troubled mortgages belonging to uncooperative customers 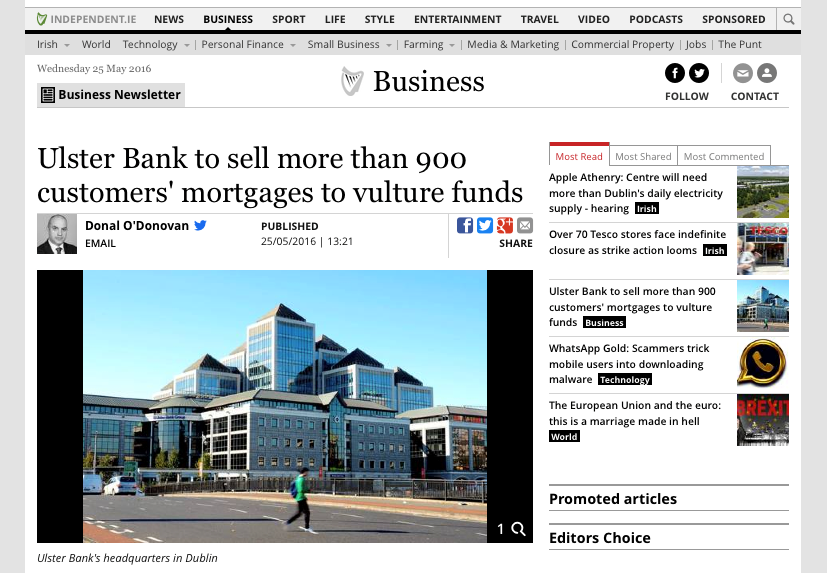 We have a hard enough time trying to relate to each other. Whether as individuals, races, classes, nations. Difficult as it is we work on it (at least some of us do) to make things better. Paulo Freire called an important aspect of this humanization. He starts his famous book, Pedagogy of the Oppressed (1970):

No matter what label we give it, people care-fully inter-acting with people, has to be a task that we have struggled with in every age. ‘Progress’, in a sense,  could be defined, not in mechanical or technical terms but also in the different ways we treat each other as living beings, how we relate, how we structure our changing societies so that every human being feels connected and connects, or the opposite.

But alongside this often personal journey, with its impact on the bigger world or society we inhabit, an other, less humanly care-full one, walks parallel.

Capitalism, as well as developing the means of production, the way we make things, the technology to improve the quality as well as the quantity of our lives, at the same time reduces humans to instruments, to things, and in its endless and often irrational search for profit, reduces us to objects and not subjects of our own lives and of history itself. Check this out the next time you have a disagreement with your employer in relation to an important need you have. Marx explained this, in his early writings, in his many references to alienation:

By freedom is meant, under the present bourgeois conditions of production, free trade, free selling and buying.”[1]

Now, here in Ireland it seems we have opened a ‘new’ chapter in the users manual of how to turn what is alive and human into a thing of secondary importance, an object without needs unless those needs are defined and determined by the market, by the buying and selling of ‘assets’…

The Ulster Bank, on May 25th, announced that is about to sell €875 million of its “troubled mortgages belonging to uncooperative customers who are deep in arrears and litigation”[2] to the vulture funds that wish to acquire these assets at a significantly reduced price. This is the same bank that refused to offer reductions in the debts of people unable to pay the mortgage on their family homes due to the recent recession, caused in no small part by the actions of the banks in collapsing the financial system. When asked about this refusal to offer homeowners the same reduction they were willing to offer the scavengers that seek to acquire these ‘assets’ the Ulster bank replied that “it was not bank policy.”

“… mortgage holders who are part of the Ulster Bank loan book sale were likely to be people unable to make any repayments on their home loans. It is completely unacceptable that vulnerable people who may not be able to make any payments are being nuked and sold to vulture funds. This is simply the outsourcing of the repossessions process to vulture funds.”[3]

“…it is (his) understanding that Ulster Bank will announce today that it will sell a loan book of 900 loans including 120 distressed family home mortgages to a vulture fund… If true, I am disgusted by this move from Ulster Bank especially the inclusion of family home mortgages in distress.  I am calling on the bank to stop this sale. At the very least the element of this sale which includes distressed mortgages should be stopped. I believe all political opinion can be united behind that call on Ulster Bank.”[4]

What will happen now to the people whose homes are in in the process of being transferred to these funds?

A recent report, by the Debt and Development Coalition Ireland (DDCI), entitled, From Puerto Rico to the Dublin Docklands, Vulture Funds and Debt in Ireland and the Global South[5], said that “while there is little research yet available on the effect of vulture fund involvement in the European property market, research from the US indicates an increased likelihood of people being thrown out of their homes.”[6]

So rather than the Ulster Bank talking to these people whose homes they are about to sell at discount they will choose, as the bank says:  “…to strengthen its balance sheet for the benefit of its customers and much needed competition in the banking market…”

Of course the funds who secure these assets will probably talk to the homeowners involved – through their lawyers, the courts and other debt collecting entities.

But when you look at it, in terms of what might make us human – as well as in terms of a historical process called (de)humanisation, what is really happening here and now, is it not, finally: money, talking to money?

Forget the children and their parents who will find themselves seeking emergency accommodation from a state that sees the rights of scavengers and vulture funds as more pressing than the needs of its citizens.

Recently then, I have been forced, once again, to ask myself Paulo’s question, “…perceiv(ing) the extent of dehumanization, (I) may ask…if humanization…is a viable possibility…” as a historical reality, now, in our current situation here, despite people significantly rejecting the politicians and the policies of austerity in the recent election, without at the same time, being able to see a viable alternative in the current political landscape?