Wednesday, 22 June 2016, at 4:20 pm the National Indigenous Congress and the EZLN issued a communiqué condemning state violence against the striking teachers in the southwestern state of Oaxaca 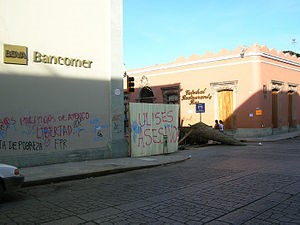 Wednesday, 22 June 2016, at 4:20 pm the National Indigenous Congress and the EZLN issued a communiqué condemning state violence against the striking teachers in the southwestern state of Oaxaca.

We condemn the escalation of repression with which the neoliberal capitalist reform, supposedly about “education,” is being imposed across the entire country and principally in the states of Oaxaca, Chiapas, Guerrero, and Michoacán. With threats, persecutions, beatings, unjust imprisonments and now murders they try to break the dignity of the teachers in rebellion.

Teachers are protesting education ‘reform’ going back to the 2008 agreement between Mexico and the OECD – a neo liberal reform seeking to privatise state education and reduce the power of the unions. The protests also object to a provision that requires the testing of teachers, the proposed dismissal of 4,000 teachers in 4 southern states as well as the recent arrest of union leaders on money-laundering and other charges.

“The state has refused to even talk to the union, instead deploying thousands of federal police and gendarmerie to areas where the strike is strongest — primarily Oaxaca, Chiapas, Michoacán and Mexico City, though also in states such as Guerrero, Tabasco and Veracruz.”

Over the past week, teachers belonging to the National Coordinator of Education Workers (CNTE) staged blockades across multiple roads in Oaxaca.

The EZLN release “to the people of Mexico and the peoples of the world” continues:

Those who delight in power decided that education, health, indigenous and campesino territories, and even peace and security are a commodity for whoever can pay for them, that rights are not rights but rather products and services to be snatched away, and they dispossess, destroy, and negotiate according to what big capital dictates. And they intend to impose this aberration through bloody means, murdering and disappearing our compañeras, sending our spokespeople to high security prisons, making shameless torture into government marketing, and with the help of the paid press, criminalizing the bravest part of Mexican society, that is, those who struggle, who do not give in, who do not sell out, and who do not give up.

The recent violence and the government’s resort to armed force is thus an escalation of the states attempt “to crush the month-long work stoppage, to ram the education reform through and to prevent the strike from developing into a broad movement backed by the working class.” (International Committee of the Fourth International (ICFI))

The protest harks back to the 2006 strike protesting  the low funding for teachers and rural schools in the state that lasted more than seven months and resulted in at least seventeen deaths and the occupation of the capital city of Oaxaca by the Popular Assembly of the Peoples of Oaxaca (APPO). Police responded to the strike organised by the local teachers’ trade union by opening fire on non-violent protestors.

We invite all of the peoples of the countryside and cities to be attentive and in solidarity with the teachers’ struggle, to organize autonomously in order to remain informed and alert in the face of the storm that is upon all of us, knowing that a storm, in addition to its turmoil and chaos, also makes the ground fertile where a new world is always born.

From the mountains, countryside, valleys, canyons, and barrios of the originary peoples, nations, and tribes of Mexico.

Aljazera has a short video of the protests

Wikipedia has a summary of the 2006 Strike