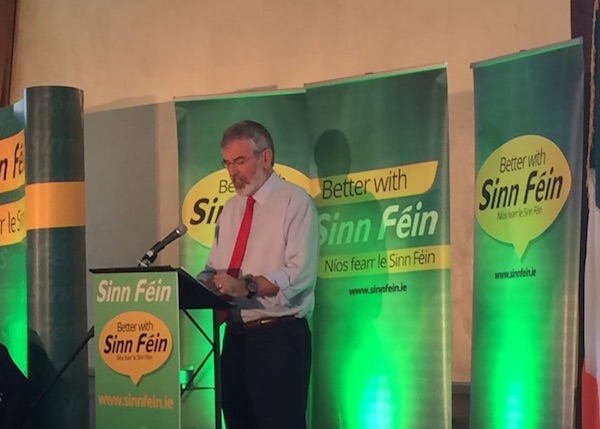 Sinn Fein leader Gerry Adams has announced that he will step down from
his leadership role as part of the party’s ten year plan. Mr Adams
indicated a time frame within ten years for his departure as party
president, and confirmed that it was a matter of not ‘if, but when’.

Speaking with reporters as he arrived at a Sinn Fein think-in in County
Meath, Adams described Sinn Fein as being “in transition.” The think-in
gathered party officials and grassroots members together to develop a
plan for electoral success over the next decade.

“Part of that will see a change of leadership, but we will come to this.
It’s a matter for the party. It’s a matter of course in the first
instance for myself, whether or not I would allow my name to go
forward,” he said.

“We are a party in transition. I have made it very, very clear. So it
isn’t question of if I will step down, it’s a question of when I step
down and we have a plan.

“We are in consultation with our grass roots putting together a
programme for the next 10 years, a part of that will see a change of
leadership. But it’s a matter for the party and in the first instance
for myself.

“I’m not precious about it, it’s a great honour to serve in any capacity
whatsoever.”

However, he declined to say exactly when this shift in power would take
place, joking with the journalists present that “the problem is if we
tell you, you would tell everyone else.”

Sinn Fein’s Martin McGuinness also confirmed that he would step down as
part of the transition to a new leadership over the coming years. He
also did not say when, saying only that Mr Adams is “a year and a half
older than me”, but left open the possibility that it might occur around
the same time.

“He and I have a plan about how this will be done. This has to be
endorsed by the leadership. When that is decided the party has to decide
who will lead the party in the future.”

Mr McGuinness added: “The only person who will decide in conjunction
with an important group of people will be Gerry Adams.

“When a new leadership takes over it will be well-equipped to take the
party forward. A lot of parties are concerned they may not have people
with the calibre to take the party forward. We have no concerns about
that.”

Speculation on who will replace the current leadership has so far
centred on party Vice-President Mary Lou McDonald and Finance
Spokesperson Pearse Doherty.