Timochenko: Peace of Colombia is the Peace of Our America

Over two thousand people took part to the ceremony for the signing of the Final Peace Agreement in Cartagena, Colombia 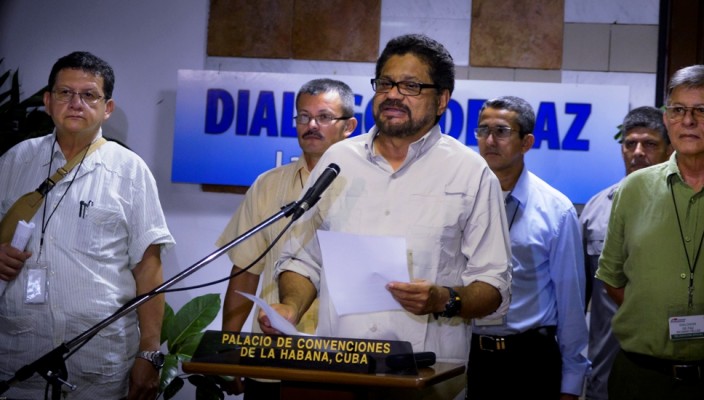 Over two thousand people took part to the ceremony for the signing of the Final Peace Agreement in Cartagena, Colombia.

After the National Anthem the signature: first to sign was Comandante Timochenko, leader of the FARC-EP followed by Colombian President Juan Manuel Santos.

The signing was followed by the speech by United Nation General Secretary, Ban Ki-moon.

On the stage, together with Timochenko and Santos were several heads of State, such as Cuban president, Raul Castro. In Cuba the peace process developed and talks took place for the past four years.

Present as well the representative of Norway, which with Cuba was the country instrumental to the development of the peace process. On the stage also the presidents of Venezuela, Nicolas Maduro and Chile Michelle Bachelet, representing the accompanying countries to the process.

In his speech Ban ki-Moon has underlined the challenges facing Colombia now that the Final Peace Agreement has been signed: “I invite you – he said – to listen to all contributions coming from the various sections of a diverse society such as Colombia”. Ban ki-Moon also underlined that “all countries are looking at the Colombian peace process and Final Agreement as an example”.

After Ban ki-Moon the floor was for the FARC-EP leader comandante Timochenko.

“My first words – he said – are for the people of Colombia who always dreamed with this day and never lost hope to build such a new country where young people could live in peace. I also think of the poor people of Cartagena who wished to assist to this ceremony but could not do it”.

Timochenko quoted then Nobel Prize Gabriel Garcia Marquez writing about Cartagena and remembered that “the peace dream was shared by our funding leader”.

The leader of the FARC-EP also said: “We are going to implement the agreement, we hope the government will do the same” and added: “We wish Palestine could find peace and from Cartagena we ask for a negotiated peace for Syria”.

Timochenko said that “we have to acknowledge that we met in President Santos a sincere interlocutor, willing to reach a peace agreement.

Likewise we’d like to thank comandante Fidel Castro, president Raul Castro and the whole people of Cuba and the government of Norway.

Thanks to Hugo Chavez and Nicolas Maduro and the people of Venezuela and thanks to Chile for their role as accompanying countries”.

Timochenko also underlined that “here nobody has given up to its conviction and ideals. Colombia requires deep transformation to be a just, inclusive and democratic country”. Ending his speech Timochenko

said: “On behalf of the FARC-EP I sincerely said sorry to all the victims of this conflict and the pain of the war”.

After Timochenko was the turn of Colombian President, Juan Manuel Santos who also begun by saluting the “victims, who have been – he said – the real and constant input in our work towards an agreement”.