After a detention order issued within the scope of an investigation against the PKK by Diyarbak?r Public Prosecutor’s Office, anti-terror units police detained Amed Metropolitan Municipality co-mayor Gültan K??anak at Diyarbak?r Airport and co-mayor F?rat Anl? 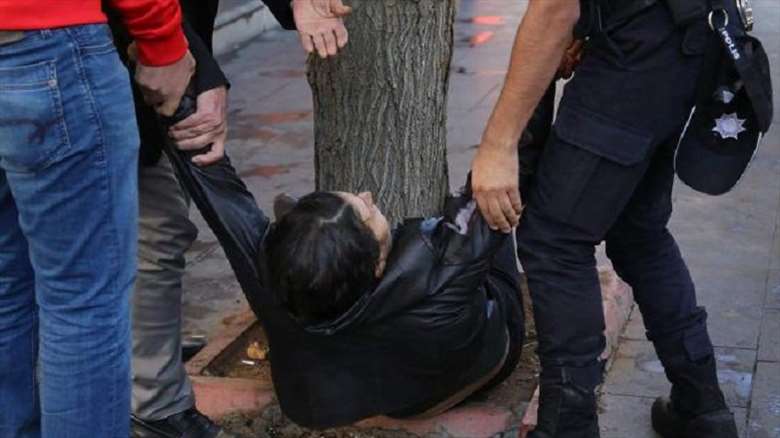 After a detention order issued within the scope of an investigation against the PKK by Diyarbak?r Public Prosecutor’s Office, anti-terror units police detained Amed Metropolitan Municipality co-mayor Gültan K??anak at Diyarbak?r Airport and co-mayor F?rat Anl? in his house, on Tuesday 25 October.

Gültan K??anak had just returned from Ankara when she got detained at the airport. In Ankara, she had been speaking at an hearing by the Parliamentary Commission of Investigation on July 15 coup attempt and the influence of coups and secret formations on politics.

F?rat Anl?, on the other hand, was taken into custody during a raid on his house. The houses of both co-mayors were also searched by police.

While the detention of co-mayors were being carried out, police forces raided the building of Amed Metropolitan Municipality and surrounded it with a large number of riot and special operations police to the accompaniment of armored vehicles and water cannons.

The municipality employees and press members were not allowed to approach the building amid a tension with police forces. Special operations policemen with long-barreled weapons have been stationed in every storey and at the roof of the municipality building.

Citizens reacted immediately against the detention of K??anak and Anl?: hundreds of people staged at sit-in in front of the municipality and vowed to remain there despite the assault by the police.

It has also been disclosed that Co-mayors K??anak and Anl?, who are being held at provincial police headquarters, will not be allowed access to their lawyers for 5 days. The ban has reportedly been imposed by Diyarbak?r Public Prosecutor’s Office. In a statement he issued on the detentions the  Chief Public Prosecutor Kamil Erkut Güre stated that the two Co-Mayors were detained as part of an investigation on “attempting to separate a portion of land under state sovereignty,” which had begun in 2015.

According to this statement, K??anak is accused of having participated and spoken during the Democratic Congress in which DTK had announced democratic autonomy. The prosecutor did no refer to a specific date but the DTK’s autonomy meeting had taken place on July 14, 2011.

The speeches K??anak had made during Newroz celebrations, in which millions of people participated, were described as proof of crime. The prosecutor also said that the use of municipal vehicles during the funerals of PKK members was proof of crime.

On the other hand, F?rat Anl? was arrested for “the use of municipal vehicles in the construction of cemeteries for PKK members.”

K??anak was detained right after the speech she had made in front of the July 15 Coup Commission in the Turkish capital, Ankara.

K??anak had described the obstacles in the way of the Kurdish issue’s resolution and said “I am sure the Commission will do a good job if it investigates how much AKP municipalities received, which spaces and lands were given to them, and which municipalities cooked soup on the night of the coup attempt. As a citizen, – she added – I demand that you look at Diyarbak?r Metropolitan Municipality records. They are all available. At least 100 inspectors had come to the municipality for them, and you arrested half of these inspectors for being FETÖ members. There are still 10 inspectors; you can review all the files and the Assembly decisions. You will see that we have not accommodated FETÖ. But I want all municipalities to be investigated like this. Which ones have given land, which ones helped FETÖ, which municipalities cooked soup on the night of the coup?”

For years now the AKP government has launched a multi-faceted attack on Kurdistan. Bombardment of Kurdish cities and villages, mass arrest of Kurdish politicians and massacre of civilians have reached an unpresented level.

Despite military attacks, the Turkish government has extended its operation against the legal institutions by occupying in fact Kurdistan’s municipalities. They have arrested Kurdish mayors, and appointed their own officials in their places.

Last Tuesday the attack was on Amed (Diyarbakir), the capital of Kurdistan. Its co-mayors were arrested and people who had elected them democratically had been attacked by police.

In the afternoon of Wednesday 10 people had been arrested and HDP deputies Ça?lar Demirel, Besime Konca, Leyla Birlik, Dirayet Ta?demir, Selma Irmak and Ferhat Encü were also surrounded and beaten by police.