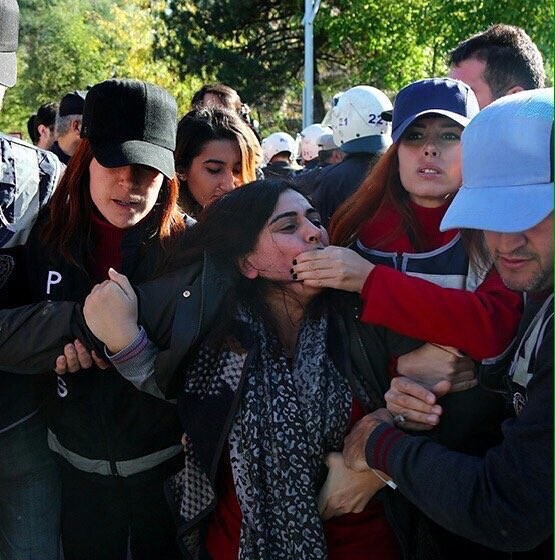 “We are the elected representatives of the people. We represent not our selves, but the masses of voters who elected us. Right now, I stand before you as a deputy, a member of the Parliament with immunity. It is not possible for me to allow the identity I represent and the will of my people to be insulted.”

The Co-chairs and Deputies of the HDP who were detained in a large-scale operation last night, made a joint statement at Court.

When the people’s deputies were arrested

in Diyarbakir and Ankara,

when the deputy from Hakkâri, Selma Irmak,

the deputy from Mardin, Gülser Yildirim

when the Peoples’ Democratic Party deputies

there were protests in Kobanî

(in the Federation of Northern Syria) – Rojava!

There were protests in Italy and Poland,

in Naples and France,

in Brussels, in Oslo, in Denmark and Helsinki, Finland.

When the people’s deputies were arrested in Amed, in Sardin, in Ardana

there were protests in Stavanger, Norway…

When the people’s deputies were arrested and beaten

there should have been protests, peaceful protests,

in his front yard and in his kitchen

(please try not disturb his wife and children!)

in his hallway and in all the rooms of his house…

When the people’s deputies were arrested and beaten

was arrested and silenced in front of Diyarbakir Courthouse

(“We will win with resistance”, she chanted)

there should have been protests in his office, his garden shed,

the Kurdish people want to live in peace and justice)…

When the people protested in Istanbul’s Sisli district

and the police fired shots,

and MP Leyla Birlik from Amed, all arrested,

there were protests in Linz and Bielefeld, in Austria

in Berlin and Moscow

in Paris and Cologne

all the people marched

all the people raised their voices

all the people made noise.

In Istanbul and Amed

in Cizre and Sardin

they let the people know,

in Diyarbakir Courthouse the Deputies spoke:

because Erdo?an with all his dubious political past ordered so.

I will not answer any questions you ask, and I have no faith that

any act of judgment will be just.

Even me being brought here is unlawful.”

In Diyarbakir they let the world know:

When Leyla Birlik and Nursel Aydo?an were

sent to Sincan Prison in Ankara,

when Ferhat Encü was sent to prison in Kocaeli,

when all this shit was going on

“This is where words end, all should rise up everywhere.”

When HDP MP Leyla Birlik was beaten in detention,

when the deputies were thrown into army helicopters

when the lawyers were beaten by the police outside the courthouse

“Words have become obsolete. Today is the day to resist.

Today is the day to scream against fascism on every street.”

When the deputies’ offices were blockaded by police

when  the bomb went off in Diyarbakir:

when all the telephone lines were cut, the screens went dead

when the deputies in court said:

” …whether we are in the parliament or in prison, you won’t be able to stop us from defending our ideology and fighting for these causes….”

then and only then

you should go hang

“Tuncel was battered as she chanted “We will win with resistance” during the detention.”

The Co-chairs and Deputies of the HDP who were detained in a large-scale operation last night, made a joint statement at Court.

The statement was translated by ANF English service:

Lawyers for HDP attacked by police at Diyarbak?r Courthouse: