Palestinian clown to stay in Israeli prison without trial

Mohammed Abu Sakha, a circus performer, and Hasan Safadi, a prisoner rights advocate, have both had their administrative detention extended by six months 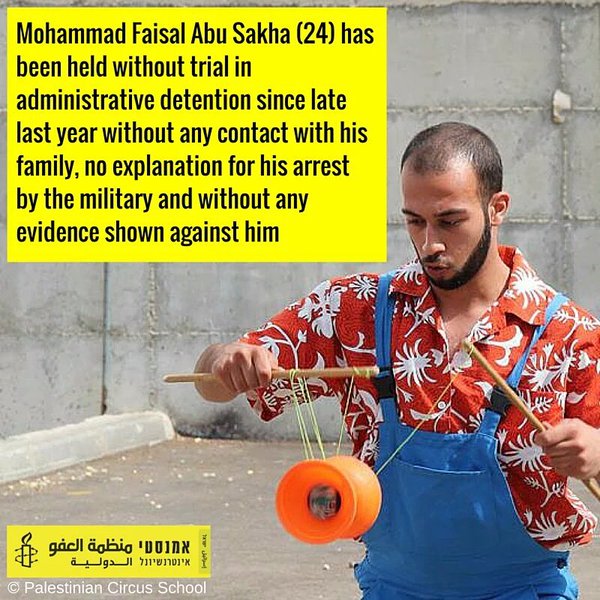 Israeli authorities last week extended the administrative detention of Mohammed Abu Sakha, a Palestinian clown and children’s entertainer, by six months. Abu Sakha, who has been in jail without trial since December 2015, is now not due to be released until June 2017, according to Palestinian prisoner rights group Addameer.

The administrative detention of Addameer’s media coordinator, journalist Hasan Safadi, was also extended by six months last week. Safadi will not be released until June 2017, by which time he will have spent over a year in detention.

Administrative detention orders are used by Israel to imprison detainees without charging them or bringing them to trial, on the basis of secret evidence. Such orders can be renewed indefinitely for up to six months at a time. They can also be used to extend the jail time of someone who has finished serving their sentence, as with Bilal Kayed, who was sentenced to administrative detention after completing a 15-year prison term.

Abu Sakha, who has been a member of the Palestinian Circus School since 2007 and taught there until his detention, was arrested on his way to work while crossing a military checkpoint near Nablus, in the West Bank. He was placed in administrative detention shortly after, which has now been extended twice.

At the time, the IDF Spokesperson said that Abu Sakha had been arrested for “his involvement in the Popular Front for the Liberation of Palestine,” deeming him a “severe security threat.” According to Addameer, that assessment remained unchanged at the time of Abu Sakha’s latest hearing, on December 5.

During one of his hearings, Abu Sakha, who specializes in working with children with special needs, told the court: “I am a circus performer. I am a clown. I have traveled around Europe and met with all kinds of people, Palestinians, Israelis, Americans. I have no intention of engaging in violent acts.”

Safadi, meanwhile, was arrested on May 1, 2016, and put in administrative detention on June 10. The military prosecutor allegedly claimed during his initial trial that he had ties to an illegal organization and that he had visited an enemy country (Lebanon) on more than one occasion. According to Addameer, Safadi was subjected to sleep deprivation and put in stress positions during a number of his interrogations. He has been denied family visits, as has Abu Sakha.

There are currently around 720 Palestinians in administrative detention in Israeli prisons, according to Addameer.