Global Rights Magazine. THE CHALLENGES OF PEACE IN COLOMBIA

This new issue of Global Rights Magazine is entirely dedicated to Colombia, a country beginning the slow and difficult road of the implementation of the agreements reached in Havana 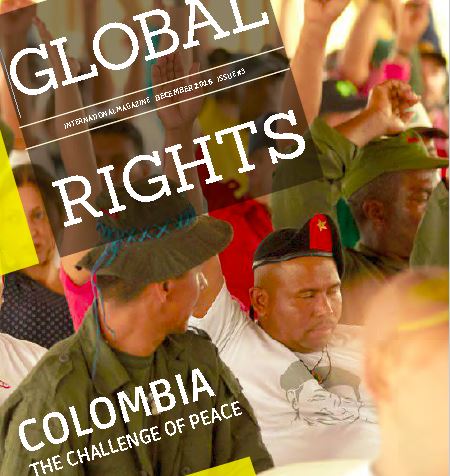 Four long and painful years of negotiations in Havana between the Government and the FARC-EP guerrillas have finally resulted in a Peace Agreement between the two parties, not without having to overcome in the final stretch the unexpected NO in the referendum unilaterally convened by President Juan Manuel Santos on October 2. A result that despite the low participation (barely 40% of the eligible electorate) showed the internal resistance of certain social and political sectors of the country to assume that peace is the only way.

Taking into account this electoral result the parties made an urgent renegotiation of the initial agreement to readapt it in some sections to the correlation of forces in the country.

On this second opportunity, more rationally, ratification between the two parties was unanimously approved by the Senate and the Colombian Congress, with the significant and disturbing absence of the sectors related to former President Alvaro Uribe, since peace is in itself a right and not something subject to a citizen’s criterion, potentially subject to manipulation and half truths.

It is obligatory to say that the beginnings of the peace agreement signed publicly on 12 November 2016 in the Colón Theater in Bogota, do not point in the right direction: 5 social leaders killed that same week by alleged paramilitaries, two young guerrillas of the FARC assassinated in cold blood (and cannot be said otherwise) by Army snipers, and the consequent and disappointing report of the International Verifying Commission, which issued a misleading signal that “impunity” could fit after all in the midst of agreements, for the sake of not break them.

The mistakes and, above all, the long shadow of “impunity”, in the Colombian case, can be tragic, bleeding and frustrate any serious attempt at peace. Historical precedents speak for themselves: The Colombian insurgents and left, M-19 or the Patriotic Union, have always been loyal to their agreements, the opposite of the governments of an oligarchy too closely linked to paramilitarism and on numerous occasions related to the fruitful business of drug trafficking.

Peace in Colombia faces the immense challenge of translating roles and words into deeds, but it must go even further to change the old and entrenched social, political, and historical practice of resolving through violence and death of the adversary what should be in fact the confrontation of ideas and opinions. Also important to emphasize in red that a similar agreement is still pending with the National Liberation Army, the other insurgent organization, delayed for too long.

Colombia today needs a strong internal accompaniment, a role that corresponds to its own society, but also a strict international monitoring and verification of both the guarantor governments and witnesses of the agreements already signed (Cuba, Norway, Venezuela and Chile), of the UN and other European countries and of the US itself, that have been verbally committed to this peace process, but also to all civil society organizations: we all must play a witness, prosecutor and accompanying role, ensuring that all without exception fulfil their word, and thus help to end a conflict that has the typical feature and data of a civil war long more than six decades: 250,000 dead recognized in a first and preliminary official report, a list that can surely get to more than 700,000 if truth is to be finally found and exposed, more than six million displaced, thousands missing and war crimes of all kinds.

This new issue of Global Rights Magazine is entirely dedicated to Colombia, a country beginning the slow and difficult road of the implementation of the agreements reached in Havana. As we write, news comes of yet another murder, this time a woman social leader has been killed in the tormented city and port of Buenaventura, where multinational interests coincide and are willing to ignore the rights of people.

Global Rights Magazine has been accompanying the Colombian peace process in these often difficult years. It will certainly accompany the post-conflict and the implementation of agreements, knowing that the road to peace is full of obstacles and challenges. As Nelson Mandela used to say: making war is not as difficult as making peace.

Colombia though and Colombians today have the right and the opportunity to build their present, focus on their future and reread their past.

And what we call the international community, also have the moral, political, ethical and personal obligation to help hope and peace to take root in this country, which is also ours as citizens of the world, so that never again shall we have to talk about war in Colombia.

Read the magazine free of charge on site