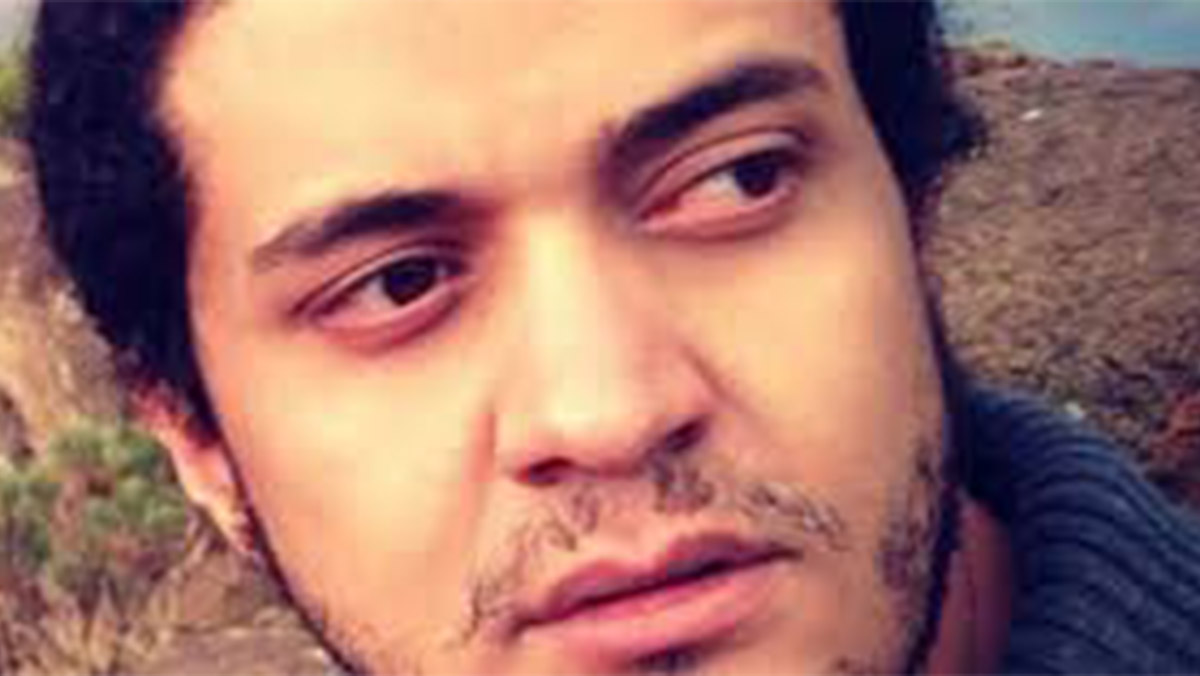 “The soldiers besiege me on all fronts

in uniforms of poor color.

Laws and regimes and statutes besiege me.

…Currently entering his third year of an 8 year (and 800 lashes) sentence in a Saudi prison following the commutation of his November 17, 2015 death sentence for “apostasy” by the Saudi regime, evidence used against him came from his book of poems ‘Instructions Within’, published originally in Beirut in 2008 and later banned in Saudi Arabia:

petroleum is harmless, except for the trace of poverty it leaves behind

on that day, when the faces of those who discover another oil well go dark,

That.. is.. the promise of oil, a true promise.

As winner of this year’s award he is good company. Last year’s winners included Amanuel Asrat, an Eritrean poet and journalist arrested on 23 September 2001 and still (along with many other Eritrean writers and journalists) lost within the prison system without, apparently, having either being tried in a court of law or even charged with a crime, now over 15 years later… “There are severe health concerns as the detainees are believed to have been subjected to torture or other ill-treatment, including lack of access to medical care, as highlighted by the reported deaths of four journalists in custody. Asrat is believed to be among the few surviving journalists, detained in the maximum security prison, Eiraeiro, north of Asmara…” and Can Dundar, writer, journalist and exile since June 2016 in Germany, fleeing from President Recep Tayyip Erdoğan’s Turkey for speaking out against the Turkish Intelligence Agency (MIT)’s covert conspiracy to transfer weapons to “Islamist rebel groups” in Syria…

At this year’s award ceremony PEN International executive director Carles Torner said: “This award is not only our way of honouring courageous writers and journalists who continue to fight for freedom of expression at great personal risk, it is also a way of telling those who seek to silence them that the world is watching.”

Ashraf Fayadh was originally detained by the country’s religious police in 2013 in Abha, southwest Saudi Arabia and released on bail; then rearrested and tried in early 2014. He was sentenced to four years in prison and 800 lashes. On appeal the court returned the case to the lower court where a new judge sentenced him to death, on November 17, 2015, for apostasy.  “Fayadh’s supporters believe he is being punished by hardliners for posting a video online showing a man being lashed in public by the religious police in Abha. Adam Coogle, a Middle East researcher for Human Rights Watch, said Fayadh’s death sentence showed Saudi Arabia’s “complete intolerance of anyone who may not share government-mandated religious, political and social views”

His crimes included alleged blasphemous comments during a dispute in a café, apostasy (“Apostasy… [“a defection or revolt”] is the formal disaffiliation from, or abandonment or renunciation of a religion by a person…Many religious groups and some states punish apostates; this may be the official policy of the religious group or may simply be the voluntary action of its members. Such punishment may include shunning, excommunication, verbal abuse, physical violence, or even execution… Examples of punishment by death for apostates can be seen under the Sharia Law found in certain Islamic countries. Wikipedia),  being in possession of photos of himself posing with women at art events (which were found on his phone), and, of course, promoting atheism in his book of poems Instructions Within…Fayadh himself explained to The Guardian: “…that the poems in his book, Instructions Within, were ‘just about me being [a] Palestinian refugee … about cultural and philosophical issues. But the religious extremists explained it as destructive ideas against God.‘”

Following the 2016 awards, Pen International President Jennifer Clement (“With this (2016) award we declare to these writers – and to those who persecute them – that their voices are heard, that they are never forgotten.“) attended the international Literature Festival in Berlin to read Ashraf Fayadh’s poems on the opening night.

“Today — January 14, 2016 — readings will be held around the world in solidarity with Ashraf Fayadh, the Palestinian poet sentenced to death in Saudi Arabia. We remain hopeful that Ashraf’s appeal will be successful.” (Posted by Marcia Lynx Qualey on January 14, 2016.)

it was said: settle there..

but some of you are enemies for all

so leave it now

look up to yourselves from the bottom of the river;

those of you on top should provide some pity for those underneath..

the displaced is helpless,

like blood that no one wants to buy in the oil market!

Ashraf Fayadh, though the son of Palestinian refugees from Khan Yunis in the Gaza Strip, was “born in Saudi Arabia in 1980”. The Kingdom of Saudi Arabia is the world’s largest oil producer and exporter, “controlling the world’s second largest oil reserves, and the sixth largest gas reserves. The kingdom is categorized as a World Bank high-income economy with a high Human Development Index, and is the only Arab country to be part of the G-20 major economies…Saudi Arabia is widely accused of having one of the worst human rights records in the world.” (Wikipedia)

pardon me, forgive me

for not being able to pump more tears for you

for not mumbling your name in nostalgia.

I directed my face at the warmth of your arms

I got no love but you, you alone, and am the first of your seekers.

you are inexperienced with Time

that could wash away all the remains of your past

and liberate you of what you had called piety..

of that heart.. capable of love,

and of intersecting with your obscene withdrawal from that flabby religion

from that fake Tanzeel

from gods that had lost their pride..

Human Rights Watch took a (depressing) snapshot of Saudi Arabia in its 2017 Report outlining continuing abuses against human rights throughout 2016:

“Saudi Arabia applies Sharia (Islamic law) as its national law. There is no formal penal code, but the government has passed some laws and regulations that subject certain broadly-defined offenses to criminal penalties. In the absence of a written penal code or narrowly-worded regulations, however, judges and prosecutors can criminalize a wide range of offenses under broad, catch-all charges such as ‘breaking allegiance with the ruler’ or ‘trying to distort the reputation of the kingdom…’

Detainees, including children, commonly face systematic violations of due process and fair trial rights, including arbitrary arrest. Authorities do not always inform suspects of the crime with which they are charged, or allow them access to supporting evidence, sometimes even after trial sessions have begun. Authorities generally do not allow lawyers to assist suspects during interrogation and sometimes impede them from examining witnesses and presenting evidence at trial…

Judges routinely sentence defendants to floggings of hundreds of lashes. Children can be tried for capital crimes and sentenced as adults if there are physical signs of puberty…”

you burp, more than you used to..

as the bars bless their visitors

with recitations and seductive dancers..

accompanied with the DJ

you recite your hallucinations

and speak your praise for these bodies swinging to the verses of exile.

he’s got no right to walk however

or to swing however or to cry however.

he’s got no right to open the window of his soul,

to renew his air, his waste, and his tears..

you too tend to forget that you are

a piece of bread

on the day of banishment, they stand naked,

while you swim in the rusty pipes of sewage, barefoot..

this could be healthy for the feet

but not for earth

“In February (2016), a Saudi court reduced Palestinian poet Ashraf Fayadh’s punishment from the death penalty to eight years in prison for alleged blasphemous statements in a book of his poetry and during a discussion group.”

Scottish writer Irvine Welsh in a Guardian article following the commutation of the death penalty said: “When this twisted barbarism is thought of as a compromise, it’s way past time western governments stopped dealing with this pervert regime.”

Despite this desperate litany of darkness, which we now know has descended on the poet and author of ‘Instructions Within’ (“I am a part of the universe with which the universe is angry, / a part of the earth of which the earth feels utterly ashamed, / a wretched human towards whom / other humans cannot maintain neutrality“) and where we fear he may possibly become lost within (“I am choked by depression, nervousness, worry. / Remorse, that I’m a member of the human race, kills me...), and despite the lengthy silence imposed by the Saudi regime which deepens by the day and is extended by the week, the month, the years passing, (“I am the experience of hell on earth..”)…we see now that there are also other voices struggling to keep this one unique voice, as well as the countless other innocent citizens in so many wretched prison cells spread over the face of the earth…alive…and never forgotten…

so do not wait for yours to come to you

for you the monitors bring their daily reports

and get their high salaries..

how important money is

for a life of dignity

without banishment, without divine creation..

I have already been resuscitated without a godly blow in my image.

I am the experience of hell on earth..

is the hell prepared for refugees.

your mute blood will not speak up

as long as you pride yourself in death

at the hands of those who do not know much..

losing your soul will cost time,

much longer than what it takes to calm

your eyes that have cried tears of oil

REFERENCES & SOURCES (thanks to)

Mona Kareem’s translation of Ashraf Fayadh’s “Disputed” Poems: (these poems appeared in Fayadh’s poetry collection ‘Instructions Within’ which was published by the Beirut-based Dar al-Farabi in 2008 and later banned from distribution in Saudi Arabia.)

OTHER poems by Ashraf Fayadh in translation can be found at Marcia Lynx Qualey’s site – Arablit.org: https://arablit.org/2016/01/11/newly-translated-poems-to-read-for-ashraf-fayadh-on-january-14/

Poems from Instructions Within