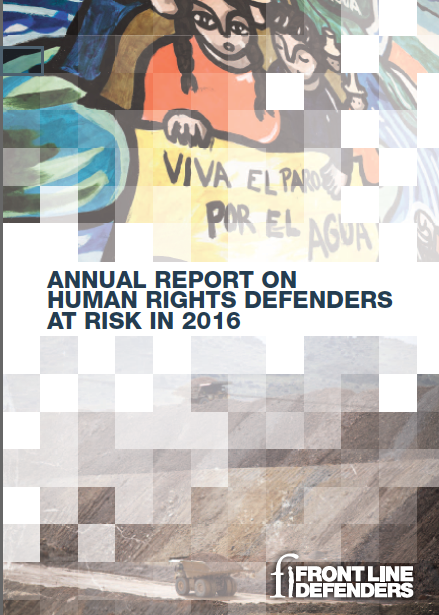 …and it makes for concerned reading.

“The number of killings reported to Front Line Defenders in 2016 represented an increase to the number reported in the previous year. 281 were murdered in 25 countries. 49% of these defenders were working to defend land, indigenous and environmental rights….Killings continued to take place at an alarming rate and in the vast majority of cases perpetrators were not brought to justice, nor did any systematic changes take place to better ensure the protection of HRDs in countries where they are most at risk of assassination.”

Add to that those human rights activists who were harassed, detained, or subjected to smear campaigns and other violations in 2016 and the number reaches 1000.

In Africa, in Asia, in the Americas, in Central Asia and ‘god forbid’ in Europe also…

The list of actions taken against those standing up for human rights for all appears endless, not just murder, but criminalisation, arrest,  abduction, detention, both temporary and prolonged, imprisonment, accusation of threats to the state, travel bans (China, India, Pakistan and Vietnam in particular in this regard), judicial harassment, death threats, excessive force by police agencies including use of tear gas, pepper spray, mace, tasers and water cannon, surveillance, assault, beating, torture, interrogation and disappearances…

In Colombia, for example: “In Colombia, the progression of the peace process and the establishment of a definitive ceasefire between the government and the Revolutionary Armed Forces of Colombia (FARC), along with the beginning of peace talks with the National Liberation Army (ELN), was met by an increase in the level of violence experienced by HRDs. After the peace agreement was unveiled on 26 August, 13 HRDs were assassinated in less than three weeks in Antioquia, César, Cauca and Nariño. Local organisations reported that these and other attacks were carried out by groups who sought to derail or postpone the peace process. A national plebiscite on the peace settlement was rejected on 2 October and, in spite of the parliamentary adoption of a revised peace agreement in November, the killing of HRDs continued to year-end.”

“In Europe, human rights defenders and organisations assisting refugees were harassed in Hungary, Poland, Greece and Turkey as a result of increasing anti-immigrant sentiments and xenophobia. France and Turkey reacted to terrorist attacks by restricting civil liberties, with France extending its state of emergency, cracking down on the right of peaceful assembly and banning several HRDs from demonstrating.”

Andrea Rocca, Head of Protection at Front Line Defenders is quoted as saying:

“This year proved that Western Europe is not immune from serious human rights setbacks…In October, UK Prime Minister Theresa May criticised ‘activist left-wing human rights lawyers’ trying to hold British soldiers responsible for murder in conflict zones. This type of stigmatisation of human rights defenders, and smear campaigns that place them in physical danger, are tactics employed around the world. Such comments feed an insidious narrative which questions the universal nature of human rights, and puts the burden on activists to defend the legitimacy of their peaceful, critical work.”

“In the months following the attempted coup d’etat on 15 July, Turkish authorities jailed thousands of people suspected of involvement, often with no basis in fact. At least 131 media outlets were shut down, and an estimated 116 journalists were jailed pending criminal investigations. In November, 375 NGOs, including human rights groups, were closed down by the authorities because of alleged ties to the PKK, the Gulenist Movement, the Revolutionary People’s Liberation Party/Front or the so-called Islamic State. In such a frenzied environment, the ability of HRDs to work was severely restricted and those who had not already been detained were at risk of being declared anti-state if they attempted to document human rights abuses.”

And on and on…and on…

The Report is simultaneously a depressing travelogue and a cruel snapshot-in-time of the violence both perpetrated and threatened against those whose courage and tenacity in the face of this ongoing “reign of barbarism” is a desperate cry for the rest of humanity to stand up and be counted.

However the Report is not all bad news. They also highlight some GOOD NEWS from each region; for example in Guatemala the “Sepur Zarco judgment is a landmark in international human rights and humanitarian law, as it is the first conviction for sexual slavery as a war crime and a crime against humanity in a domestic court” – for the 11 women survivors of sexual and domestic slavery perpetrated against them 34 years ago by the Guatemalan military. “The two accused – former members of the military – received sentences totaling 360 years imprisonment.” Al Jazeera reported. The ruling, however, could not bring back the husbands of the woman, most of whom had been murdered by the military in the 1980’s when they set up their base in the area.

Front Line Defenders was founded in Dublin in 2001 to protect human rights defenders at risk “(HRDs), people who work, non-violently, for any or all of the rights enshrined in the Universal Declaration of Human Rights (UDHR).”