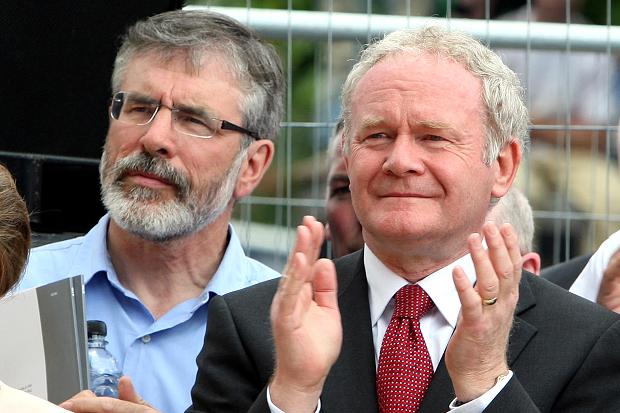 Last Monday Martin McGuinness resigned as deputy First Minister because Arlene Foster refused to stand aside, without prejudice to allow an independent investigation to be established into allegations of corruption, fraud and incompetence at the Department of Enterprise, Trade and Investment.

During this scandal another DUP Minister withdrew Irish language grants of £50,000 from children wanting to travel to the Gaeltacht as part of the Líofa project. It was a deliberate snub to those who wish to live their lives through Gaeilge.

Then serious allegations of sectarian bias emerged about the allocation of money for community centres by the same DUP Minister.

Martin McGuinness’s resignation effectively ended Arlene Foster’s role as First Minister. Under the terms of the Good Friday Agreement it fell to the British Secretary of State James Brokenshire to acknowledge the inevitability of an election and March 2ndwas set as the date.

And then 24 hours later the British Prime Minister Theresa May finally set out her strategy for Brexit.

So a busy week and an even busier time ahead.

In the Dáil on Tuesday the Fianna Fáil leader Micheál Martin used statements on the North to engage in his usual sour grapes about Sinn Féin and in support of the SDLP and UUP. He tried to lay every problem that ever existed at our door.

Micheál gets quite hysterical when sounding off about republicans. It was ok when we were up there – you know up North – but with 30 elected representatives in the Oireachtas we are now too close for comfort. Sinn Féin represent a viable alternative for voters and he doesn’t like that.

As I said in the Dáil: “That says more about his leadership’s historical tolerance of corruption than anything else. For example, Deputy Micheál Martin sat at the Cabinet table for 14 years. While I have no doubt there were good people at that table, the Fianna Fáil leader did nothing about the corruption and waste of public money that characterised that period. He did nothing about the brown envelope culture”.

Sinn Féin will not tolerate behaviour of this kind. All such allegations must be rigorously and independently investigated. So we took a stand against corruption.

We took action as soon as the head of the civil service informed Martin McGuinness early last year that there were serious problems. On 2 February 2016, the deputy First Minister was provided with a briefing on this matter. He immediately asked for urgent action to close down the scheme. That closure was formally agreed by an urgent procedural decision on 5 February and the issue was then passed to the Assembly.

During the Assembly debate on 15 February, Conor Murphy raised his concerns about allegations of fraud within the scheme. At the end of the debate, the SDLP voted to keep the flawed scheme open. So did the UUP. Sinn Féin voted to close it. It was closed on 29 February. Conor Murphy also spoke to the Comptroller and Auditor General and raised with him his concerns about the RHI scheme. The Comptroller and Auditor General produced a damning report in the summer of 2016.

Regrettably, despite our best efforts, the institutions are now gone and an election will be held. On Tuesday in the Dáil I invited Fianna Fáil, Fine Gael and Labour to contest to forward candidates. Mary Lou thought it was a great idea.

There was silence from the other parties. But I repeat my invitation. They are going to come up anyway. Fianna Fáil, Fine Gael and Labour members will be on the campaign trail to support the SDLP and UUP.

Beyond the election, there will still be a need for negotiations to establish the institutions, but let us be clear. There is no point in re-negotiating what has already been negotiated but not implemented. These agreements need to be delivered. Much of what is at fault lies in past agreements not being implemented.

There must also be a step change in the behaviour and attitude of the DUP to its partners in government and to the working of the institutions. All people need to feel they are respected. There is also an urgent need for a step change in the approach of the Irish and British Governments.

There is a responsibility on the Irish Government to ensure the agreements are upheld and implemented. In recent years, apart from the pioneering work done by Albert Reynolds and the work done by Bertie Ahern on the Good Friday Agreement, successive Irish Governments have consigned themselves to the role of spectator and occasional commentator. This is no longer good enough.

Finally, Theresa May set out her vision for Brexit. In truth it wasn’t much of a vision. Her decision to leave the single market and the customs union sets Britain on course for a hard Brexit. The economic and political implications of this for the people of this island are significant.

The British Prime Minister also said that the electorate voted with their eyes open to leave the European Union. She ignores the fact that voters in the north did not. They voted to remain. The DUP’s refusal to accept this is a betrayal of the electorate.

Ms May also repeated her intention to bring an end to the jurisdiction of the European Court. Along with her commitment to remove Britain from the European Convention on Human Rights this will have profound implications for the Good Friday Agreement. The role of these institutions are fundamental to the human rights elements of the Good Friday Agreement.

So, it’s now over to the people. It’s time for you to have your say. The election on March 2nd is about accountability in public life and zero tolerance of corruption. It is about delivering real powersharing based on respect. It is about moving towards a new Ireland. It is about negotiations on Brexit that see the north remain part of the EU.

It is an opportunity to stand up and be counted.  To do that you need a vote – so put the Andersonstown News down and check if you are registered. If you’re not registered you can’t vote.