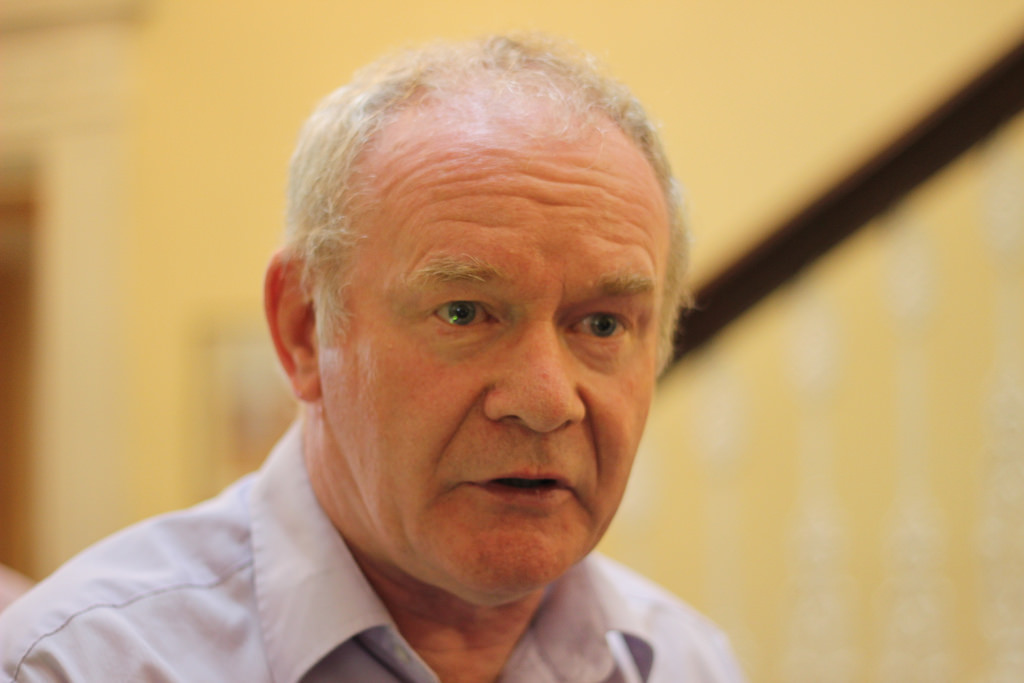 Sinn Fein’s Deputy First Minister Martin McGuinness has resigned in protest at unionist arrogance and intransigence, collapsing the Stormont Executive and throwing a question mark over power-sharing and the political process in the north of Ireland.

The move was not unexpected as Sinn Fein had warned on multiple occasions in recent weeks that its patience with its unionist partners, the Democratic Unionist Party, had finally run out. This weekend, Sinn Fein leader Gerry Adams signalled the party could withdraw Mr McGuinness in order to make Ms Foster’s position untenable.

Mr McGuinness’s resignation comes amid question marks over his own health, but there is no doubt the move follows directly from the actions of DUP leader Arlene Foster and her Ministers.

Most recently, this has been Foster’s failure to recognise the seriousness of corruption allegations facing her party over a government renewable energy incentive scheme which will cost in the  region of a billion pounds in public funds. Known as the ‘cash for ash’ scandal, the scheme provided limitless subsidies for those who burned a certain biomass fuel well in excess of the cost of the fuel itself, and had generated public outrage and despair.

Last month, Foster’s DUP colleague Jonathan Bell broke party ranks to speak out against her, telling local media that she told officials to alter documents related to the scheme to minimise her appearance of responsibility. She denied the allegations of fraud and corruption and has refused to resign.

Earlier today, she made it clear she was prepared to see Assembly elections rather than step aside ahead of an independent investigation. In a message to Mr McGuinness – before the announcement of his resignation – she said: “If he is playing a game of chicken, if Sinn Fein are playing a game of chicken, and they think we are going to blink in relation to me stepping aside they are wrong – I won’t be stepping aside. And if there is an election, there is an election.

“I take my directions from the electorate and certainly not from Sinn Fein,” she declared.

In a resignation letter sent to Stormont speaker Robin Newton, Mr McGuinness states: “The First Minister has refused to stand aside, without prejudice, pending a preliminary report from an investigation.

“That position is not credible or tenable. Therefore it is with deep regret and reluctance that I am tendering my resignation as Deputy First Minister with effect from 5pm on Monday, January 9 2017.

“I have urged Arlene Foster to stand aside without prejudice to ensure confidence in the necessary investigation and in the wider public interest. These institutions only have value if they enjoy the  confidence and support of the people they were established to serve.

“They only have meaning if are delivering fairly for all our people based on the principles of equality and mutual respect on which they were founded.

“Over the last 10 years I have worked with DUP leaders and reached out to unionists on the basis of equality, respect and reconciliation.

“Sinn Fein will not tolerate the arrogance of Arlene Foster and the DUP. Sinn Fein wants equality and respect for all. That is what this  process must be about.

“Today I tendered my resignation.Today is the right time to call a halt to the DUP’s arrogance.