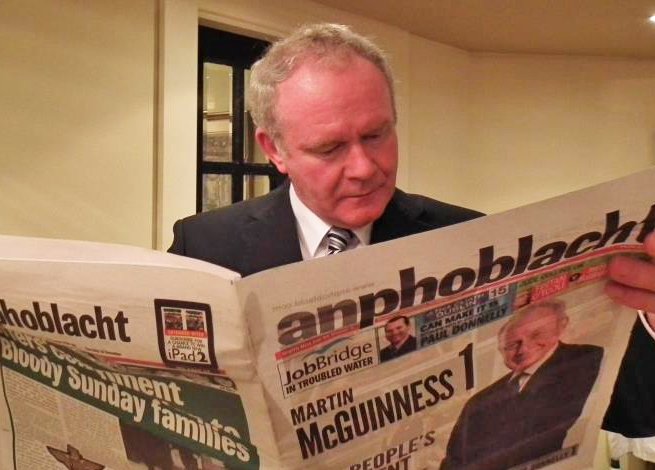 Sinn Fein’s Martin McGuinness has effectively retired from politics after announcing he will not be standing for re-election in the 2 March poll to the Belfast Assembly.

A former IRA commander, in recent decades Mr McGuinness became synonymous with Sinn Fein’s peace strategy and its efforts to achieve a reconciliation with unionism and the British establishment.

His decision to quit Stormont was announced in three television interviews this evening. It followed his resignation as deputy first minister last Monday week in protest at the latest corruption scandal to engulf his unionist partners in the Six County Executive.

That prompted this week’s collapse of the power-sharing Executive and the calling of elections for March 2nd.

In a statement, he said a deterioration in his health had coincided with the refusal of DUP leader Arlene Foster to step aside pending an investigation.

He also revealed he had planned to step down in May this year, which would have marked the tenth anniversary since he and the late DUP leader Ian Paisley entered government together, a pairing which became famous as the “chuckle brothers”.

“Unfortunately, my health and the current crisis have overtaken this timeframe,” he said.

He was determined to overcome the rare and serious illness with which he has been diagnosed, and said he would continue to support Sinn Fein as best he could.

“Over the last 10 years I have worked tirelessly to make powersharing work,” he said. “The institutions are now in a deep crisis as a result of recent events and we are facing into an election when the people will have their say”.

Sinn Fein was a party in constant development, renewal and evolution, he said, and he felt privileged to have been a part of that. “It remains my own personal and political ambition to break the link with Britain and to unite all who share this island under the common banner of Irish men and women.

“I am deeply proud of the generation of Irish republicans that came before us. A generation that kept the vision of freedom alive through the difficult post-partition era when they faced unrelenting repression and persecution from the Ulster Unionist Party in an apartheid Orange state.

“I have been privileged to be part of the generation that broke that apartheid state apart and to have been part of a Sinn Fein leadership that delivered peace and radical change. There are more republicans today than at any time in my generation.”

Mr McGuinness said his “obvious health issues” were being addressed by a superb team of national health service doctors and nurses. “But I want to be open and honest with my friends and colleagues in Sinn Fein, with the electorate of Foyle and with the wider community beyond my own constituency. I also want to be fair to my family and to the teams of carers who are doing their best to provide me with the treatment I now require to deal with this very serious medical condition, which I am very determined to overcome,” he said.

“Unfortunately, I am not physically able to continue in my current role and have therefore decided to make way for a new leader.” Mr McGuinness said that as a Sinn Fein activist he would continue to “play a full and enthusiastic part in that essential process of building bridges, of dialogue and of reconciliation between our still divided people”.

“Despite the current difficulties and challenges, I am confident and optimistic about the future. We have faced more difficult times and found a way forward. As a society we have made enormous progress. We
must continue to move forward. Dialogue is the only option.”