the countless Kurdish political prisoners held in Turkish jails, 26 of whom have been on hunger strike since early February 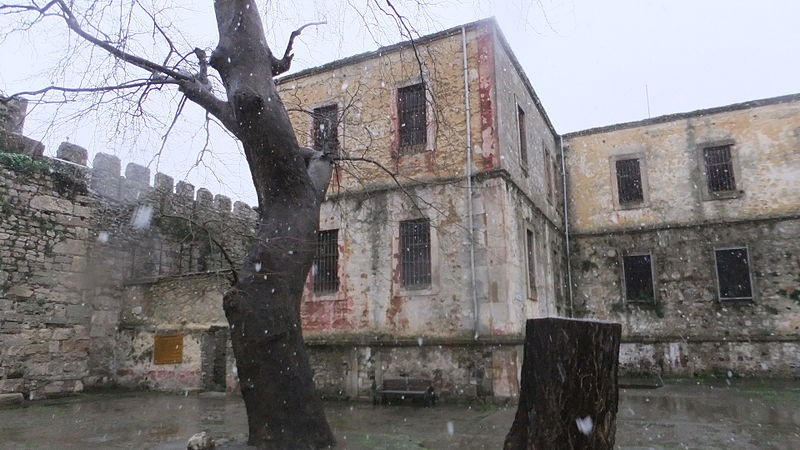 Kurdish Newroz – (New Year: the celebration coincides with the March or Northward equinox around the 21 March with the festivals usually held between 18 and 24 March) – celebrations this year embrace the plight of the countless Kurdish political prisoners held in Turkish jails, 26 of whom have been on hunger strike since early February in Izmir’s Aliağa Şakran Prison (on the Aegean coast) who began an indefinite hunger strike for a number of demands:

These include: demanding an end to the isolation of PKK leader Abdullah Ocalan and other inmates in Imrali Prison, the end of human rights abuses in prisons and the end of the destruction of Kurdish cities and villages in southeastern Turkey.

“Give medical attention and treatment to sick prisoners.

End standing on attention during roll-call.

End systemic oppression in the prison.”

Conditions in the Izmir Prison where the original strike began are reported as being deplorable:

“The Şakran Prison has turned into a systemic torture center and every day new incidences of rights violations and torture come to light. Families going for visitations are subjected to mistreatment and physical torture in the prison and healthy communication with the inmates is impossible due to communication penalties issued to prisoners. The prison administrator or other officials cannot be reached to provide information regarding the conditions of the inmates.”

Speaking to the ANF News Agency hunger striker Necdet Kaya’s brother Hasan Kaya stated “that the inmates joining the hunger strike had no other choice left in the face of inhumane treatment, saying; ‘Of course, they could not remain silent on the impositions they are facing under very severe conditions. The guards are always ready to assault and batter the prisoners. They do not leave us even for a while during the visitations, the duration of which has also been reduced recently. The hunger strikers are determined to continue their protest until it reaches its goal.‘”

The hunger strikers are also demanding the reestablishment of necessary conditions for “the restart of the negotiations for a peaceful and political solution to the war in Kurdistan,” according to lawyer Deniz Kaya.

A recent statement by Deniz Kaya on behalf of the PKK and PAJK prisoners had stated the following:

“The AKP is trying to intimidate the opposition through its emergency decrees, arrests, detentions, and normalization of torture. Parliamentarians, mayors, academics and journalists are arrested, villages are burnt, houses are destroyed, people are displaced and massacred. The first place where the state of emergency coup regime was implemented was the İmrali High Security Prison. An unprecedented system of isolation and torture is taking place there. The isolation of Kurdish People’s Leader Abdullah Öcalan is being expanded over to all prisons. Our Leader and the comrades that are in the same jail with him are unable to meet with their families or lawyer, and are even prohibited from writing a letter. The people put in prison have no life guarantees. Every day, our friends that are exiled from one prison to another are searched naked and tortured. Our belongings are seized during the raids on our cells and the letters we write in Kurdish are not sent as they are labelled ‘unknown language.’ Cameras are placed in our cells in a way that violates our living spaces, and we are forced to stand on attention during the roll-calls and wear name badges just like during the September 12 coup. The fascist AKP-MHP bloc seeks to consolidate their dictatorship by making Erdoğan president through a referendum. As the PKK and PAJK prisoners, we state that we will continue to reject this fascist and racist system and put up resistance. We call upon all social groups to say ‘NO’ during the referendum enforced by the AKP-MHP alliance and to enhance the resistance at all fronts.”

The current desperate situation across the jails is a reminder of  September 12, 2012 when 70 Kurdish prisoners went on hunger strike and were soon joined by over 600 others. Some 682 inmates in 67 prisons eventually were on hunger-strike, demanding “improved prison conditions and eventual house arrest or full release of PKK leader Abdullah Öcalan as well as increased cultural rights for Kurdish people, including Kurdish language education and the right to defend themselves in court, in Kurdish.” The strike lasted 67 days and was brought to an end after Turkish authorities lifted the isolation on Abdullah Öcalan, who then called for an end to the strike. The protest is also recognised as paving the way for negotiations and a 2-year ceasefire and solution (peace) process between the Turkish government and the PKK.

As of the time of writing, Kurdish Newroz, news of the prisoners’ condition leaking out reports that a number of those who began their strike in February are now in a critical condition…

Newroz – for the people of Kurdistan, who value their identity, their rights and their independence!

We here in Ireland know only too well the suffering and the price of the Hunger Strike in response to political and military repression. On the Ist March 1981, Bobby Sands, the Provisional IRA’s former officer commanding (OC) in Her Majesty’s (Political) Prison The Maze (also known as the H Blocks or Long Kesh) refused food. Another I.R.A prisoner, Francis Hughes, 27, from the village of Bellaghy joined the fast on 15th March. He was later followed by I.R.A volunteer Raymond Mc Creesh, 24, from South Armagh and Patsy O’Hara, 24, from Derry City the officer commanding the I. N. L. A prisoners in the Blocks. They joined their comrades in refusing food on 22nd march. Bobby Sands, now Member of Parliament for Fermanagh/South Tyrone, died at 1:17am on May 5th 1981 after sixty-six days without food. Sadly nine more young Irishmen were to follow Bobby Sand’s footsteps before the hunger strike came to an end. “Nine more coffins were followed through the narrow streets and country lanes of the six-counties. Nine more families were left broken hearted, after watching their loved ones die a slow and agonising death because of Britain’s point blank refusal to give them their five just demands, their rights as political prisoners of war: Francis Hughes died a week after Bobby Sands on 12th May. Patsy O’Hara and Raymond McCreesh both died on 21st May. Joe McDonnell died on July 8th. Martin Hurson died July 13th. Kevin Lynch died August 1st. Kieran Doherty died August 2nd. Thomas McIlwee died August 8th and Mickey Devine died August 20th.” The protracted hunger strike came to an end on 3rd October 1981 after 217 days….

Maybe it would benefit His Excellency President Recep Tayyip Erdoğan to reflect on the ‘Iron Lady’ Margaret Thatcher,  who despite all recalcitrance, herself passed on as well as her policy of criminalising Irish militants who demanded their rights…

Now – once again – we watch history repeat itself: Hasan Kaya (brother of hunger striker Necdet Kaya): “The hunger strikers are determined to continue their protest until it reaches its goal.”