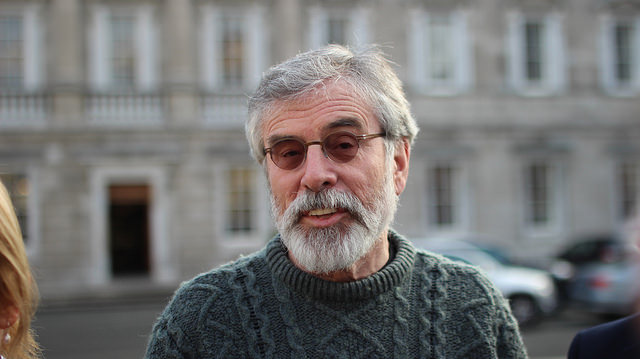 We publish the appeal made by Sinn Fein President Gerry Adams ahead of today elections in the North of Ireland.

This election has been marked by some expressive, funny, biting political satire. The lengths to which some have gone to produce twitter and facebook videos has been little short of astonishing. Computer technology and social media have added a whole new dimension to parody, sarcasm and irony.

Most of it has been directed at the DUP. The Renewable Heat Incentive scandal; the double standards and hypocrisy; the questions over who paid hundreds of thousands to that party for Brexit propaganda for London and Scotland, have all featured.

And then there was that crocodile moment. At one level it was disturbing that a whole section of citizens could be reduced in the eyes of a party leader to the status of an animal. But then the DUP is the party that once promised – sledge hammer in hand – to Smash Sinn Féin. So, this remark fitted neatly into the DUPs current political and media strategy for the election which boils down to scaring the unionist electorate with Sinn Féin. Hence the dark and sinister leaflets warning of ‘Gerry Adams radical agenda …’.

‘Operation Fear’ is older than the northern state. It has its roots in the sectarian politics linked to the Orange Order in the early part of the 19th century and the political turmoil of the late 19th century. It was especially evident in the political battles over a series of Home Rule Bills which saw the Unionist business class in the North allying with the Conservative Party. It was then that the ‘orange card’ was introduced into Irish and British politics.

The tactic was simplicity itself. If you want to stop Irish Nationalism, and retain the Union with Britain, then Protestants must vote unionist. It used to be a vote against Rome Rule but given that none of us want to be ruled by Rome that seems a bit pointless. However it worked in the past.

This is one of the slogans on which the Ulster Unionist Party was formally established in 1905. Sectarian pogroms and the expulsion of Catholic workers from their places of work were commonplace. It was in this dark period of our history, when partition was being advocated, that the ‘Not an Inch’, ‘What we have we hold’ and ‘No surrender’ slogans emerged as the war cry of a community that saw itself as constantly under siege.

The politics of right wing populism are not a new phenomenon. But partition gave it a new dynamic.

Within the northern state an institutionalised supremacism emboldened sectarianism. This was most effectively exploited during the Outdoor Relief Movement of the 1930’s which briefly united Catholic and Protestant workers against poverty and unemployment. Sadly it worked.

Last year the DUP, which has used this single transferable strategy through every election and negotiation, reduced it all down to – if you don’t vote DUP Martin McGuinness will become the First Minister. Shock horror. The fact that the First and Deputy First Ministers are equals – and interdependent – as evident in Arlene’s sacking by Martin when he resigned – is just ignored. He was the bogeyman in that election.

With Martin so obviously ill, and Michelle just new to the job, the DUP decided that this year I would make the perfect bogeyman. The DUP ‘master strategists’ also hoped Sinn Féin would be stupid enough to indulge them by rising to the bait and engaging in an interminable slagging match. So when Michelle was asked at a press conference about Arlene’s crocodile claim she refused to be drawn into a row. We had our agenda for that day and weren’t going to hand it away to the DUP. In an aside I dismissed it with ‘See you later alligator.’

The Irish language community which has been a special target of some of the most vitriolic language from DUP representatives turned Arlene’s political jibe back on her and the DUP. Suddenly Gaeilgeoirí were dressed in crocodile costumes outside DUP offices and outside the Belfast Courts. The crocodile logo started to pop up all over social media.

The refusal of the DUP leader to answer questions at the launch of their manifesto became another point of ridicule. The ‘man flu’ excuse didn’t wash with most people, no more than had the earlier claim of misogyny during Arlene Foster’s initial row over RHI with former DUP Minister and party colleague Jonathon Bell.

The big question of course, is what impact all of this will have on the vote for the parties? The honest truth is I don’t know. The electorate will make their minds up about all that has transpired and pass their judgement on Thursday. The political parties and leaders will then have a job of work to negotiate an agreement that delivers on the outstanding elements of all of the previous agreements.

Every election is important. But some have a historic significance that resonates for years. This is one of those. The future of the Good Friday Agreement, of the political institutions, and of the principles of equality and respect and parity of esteem that underpin the Agreement, are at grave risk.

This election is about rights. The right of every citizen, whatever their religion, colour, gender, sexual orientation, to be treated as equals.

The election is also about making a stand in favour of good governance. That’s why Martin McGuinness resigned. He felt that the electorate should have their say on the RHI scandal. So Thursday is your day. The peoples day. If you don’t vote – don’t complain. Because if you don’t vote you will be rewarding bad behaviour.

I hope people will vote Sinn Féin.  Your VOTE was too hard fought for to be left sitting on the fireplace.