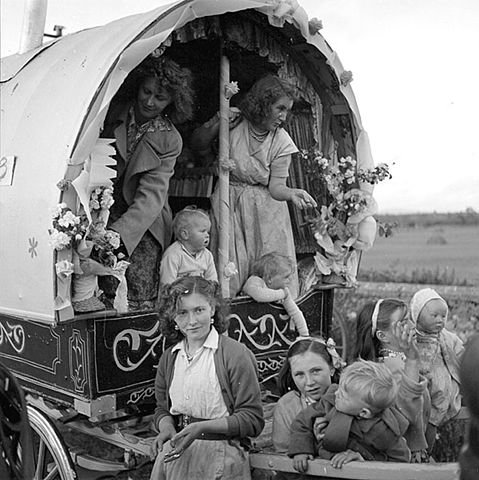 I want to welcome the Traveller groups represented in the gallery and elsewhere in Leinster House this evening, and I extend solidarity to all Travellers on this historic day.

It is their day, and a momentous step forward for equality.

Travellers have waited a long time for this moment and I am glad that I have been able to see their aspiration for proper recognition come to fruition.

The Taoiseach will know that I have been raising this issue with him for years now, and I want to welcome his statement recognising Traveller ethnicity this evening.

Some have done it for decades.

We need to be mindful also of those who have suffered because they were Travellers and I particularly want to remember the Lynch, Connors and Gilbert families who died in Glenamuck.

I want to pay tribute to the women of the Traveller community.

Like their sisters in disadvantaged sections of the settled community, the women have been the great heroines and the champions who have kept their families going through thick and thin.

I also want to acknowledge the work of Minister of State David Stanton.

I commend also the work of the Justice Committees, both in the last Dáil who adopted a report by Pádraig Mac Lochlainn recommending the recognition of traveller ethnicity and also the current Committee chaired by Caoimhghín Ó Caoláin.

Today’s decision to recognise Traveller ethnicity is the right thing to do.

The Taoiseach’s statement this evening finally brings the Irish State into line with existing recognition already in place in the north of Ireland, as well as in England, Scotland and Wales.

The distinct culture, traditions and ethnicity of the Traveller community is to be cherished and valued.

One of the main characteristics of Irish Travellers is their nomadic lifestyle.

Until then many earned a living from repairing and making household utensils which were mostly made from tin.

The rapid pace of new technologies, the use of plastic and other cheap goods brought about major changes in Irish Travellers lifestyles.

The Commission on Itinerancy Report of 1963 also had a huge bearing on the lives of Travellers in this State.

The report established policy on Travellers for the following twenty years.

It is one of the most shameful reports in the history of the State.

If Teachtaí want an insight into its agenda or views, they need to look at the terms of reference for the commission.

(1) to inquire into the problem arising from the presence in the country of itinerants in considerable numbers;

(2) to examine the economic, educational, health and social problems inherent in their way of life;

(3) … to promote their absorption into the general community.

These terms of reference were dripping in racism and elitism.

They were ignorant, stupid and ill informed.

Little wonder there is, after decades of discrimination and demonisation a sense of demoralisation, low self-worth and inferiority among some in the Travelling community.

The prejudice and discrimination many Travellers face has worsened in recent years.

We need only look to the opposition to a temporary halting site for those bereaved by the Carrickmines fire in late 2015 as an example.

Or the treatment of Travellers in my own constituency who were evicted from a halting site in Dundalk this time last year.

We know that there is much wider institutional discrimination faced by members of the Travelling community, in areas like health and education provision.

That has been a hallmark of the relationship between settled people and Travellers.

It is a relationship that has been blighted by suspicion, resentment and animosity, based on false perceptions and fears.

A lot of this is based on ignorance.

The only cure for ignorance is knowledge.

That comes from education and engagement.

The Proclamation of 1916 should be the mission statement of a modern Irish Republic.
It addresses itself to Irish men and Irish women.

It doesn’t say unless you’re a member of the Traveller community.

All of us have rights.

This includes the right to receive equal service in shops and pubs.

To be able to access education, and health services, and work, and accommodation, on the basis of equality.

Every Irish citizen should enjoy the rights and entitlements that comes with that citizenship.

Regrettably this has not been the case for our Traveller population.

The Traveller child born today faces a life in which he or she will be part of the most socially disadvantaged group in Irish society.

That child will leave school earlier, have little prospect of work, will suffer ill-health and poverty, and will die younger.

He or she will endure substandard living conditions.

Many will have no access to basic facilities such as sanitation, water and electricity.

They will face discrimination in employment and most will never work.

Cutbacks in education, health and other services have impacted severely on the Traveller community.

At the root of all these problems are the unacceptable levels of prejudice, discrimination and social exclusion experienced by Travellers at institutional and other levels.

This has to be combatted.

And it can be.

Alongside tonight’s recognition of Traveller ethnicity, there needs to be a process established to improve relation between the settled and Travelling communities.

Sinn Féin have called in the past for the establishment of a national forum, across the island of Ireland, involving Travellers and the settled community, including representatives of all political parties, of government, local authorities, health and education sectors and representatives of media organisations to plan a way forward.

I want to repeat that call this evening.

Such a forum could discuss openly and in detail how discrimination and prejudice against Travellers can be confronted, including prejudicial attitudes facilitated by the actions of some politicians and media outlets.

But despite those decades of discrimination, the Traveller community are a proud people, a resilient people.

I want to acknowledge in particular the huge contribution and influence on Irish traditional music by Irish Traveller families, particularly uilleann pipers and fiddlers.

In their excellent book, Free Spirits, Tommy Fagan and Oliver O’Connell make the point that “Ireland and Irish culture is richer because of the music and songs of the Traveller community”.

We can add to that Maggie Barry and the Pecker Dunne.

Christy Moore has consistently paid a tribute to John Reilly, who kept alive songs like the ‘Well Below the Valley’, which have been sung for two hundred years.

That is the Traveller community I know.

In the summer of 1969, when sectarian evictions were incited in reaction to the demands of the civil rights movement, I was one of a small group of activists who helped families to move their belongings from their homes.

It should be noted that it was people from the Traveller community in Belfast who provided and drove the lorries at great risk to themselves and which took these families out of danger.

There is among Travellers an articulate grassroots leadership well able to voice Travellers issues and who have consistency raised their community’s awareness of their rights.

Some of them are in the gallery.

Many more are outside.

I know that they are up for the challenge of ensuring that we resolve lingering issues and ensuring our society embraces the differences among citizens that make up the diversity and uniqueness of our island.

Through strong and resolute leadership and co-operation at all levels in political and civic society and in our settled and Traveller communities we can ensure a society that underpins equality for every citizen.

The formal recognition of Traveller ethnicity is not a magic wand or formula that will address the challenges and discrimination faced by the Travelling community on its own, but it is a major step in the right direction.

We need to keep moving in that direction.

That means ensuring the long overdue recognition of Traveller ethnicity is to be the starting point for that process, not the end.

This is a hugely historic moment for the 40,000 members of our travelling community.

It is an important symbolic acknowledgement.

It also must pave the way for real, practical change.