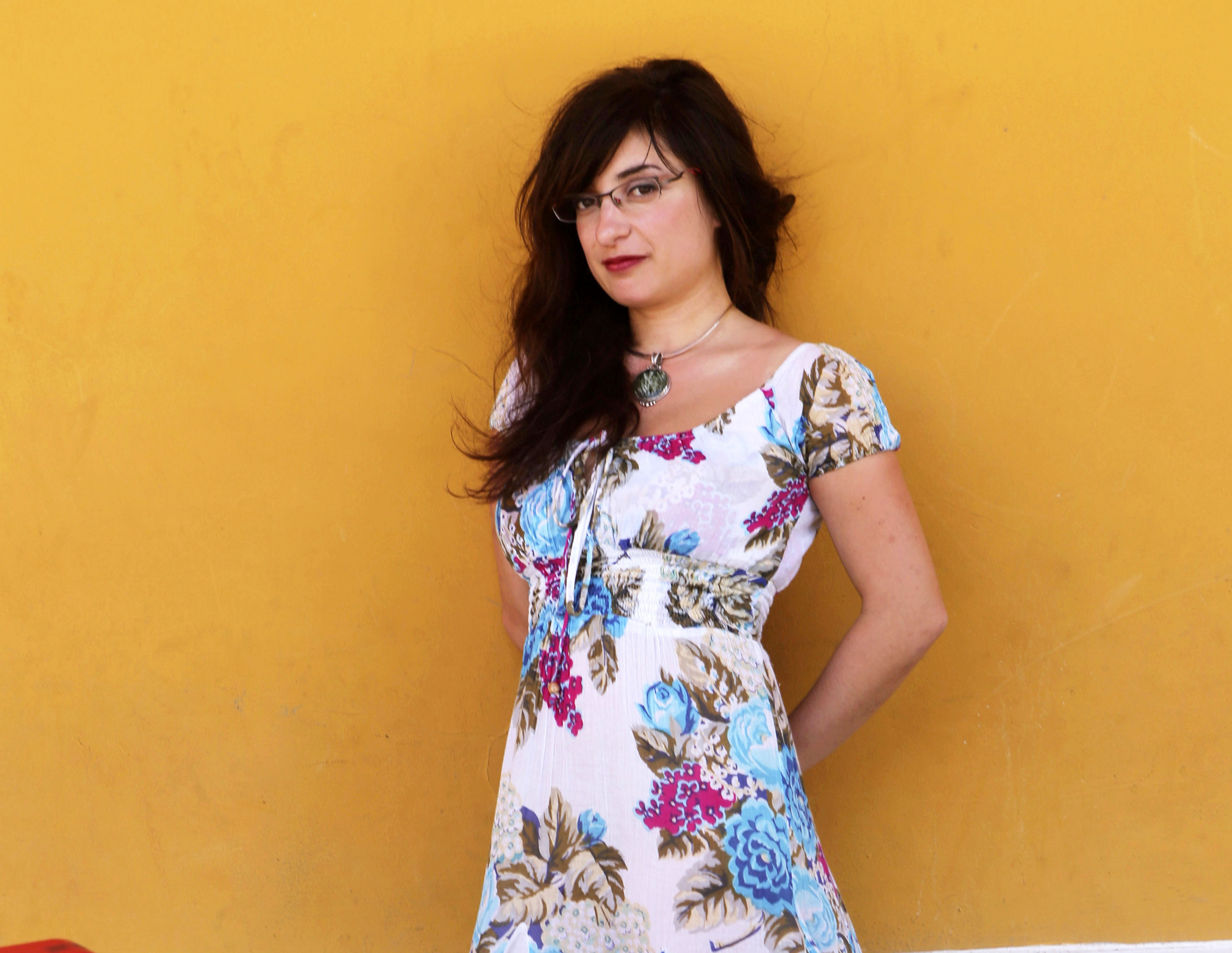 Let’s start with something about you.
I’m from South of France, from the region of Toulouse. I have always lived in farms with a tribe of animals, including horses… and there was a time when  I had even contemplate seriously to breed horses. When I was about 21, I created a network of lessons in Occitan for adults in villages. At that time, I was doing a Master of Romanic Languages at Montpellier University, focused on Occitan Literature. After starting my PhD , I taught Occitan language at University, and when I completed my PhD thesis, I worked on a research project about Occitan drama from the seventeenth century. I did many other activities around Occitan language at that time. For example, I played  an operetta in a theater,  and also Antigona, translated from Greek to Occitan in rimes… with a Chorus, it was extraordinary. I had a radio broadcast in Toulouse, and also presented TV chronicles about Occitan literature in a magazine called “Viure al Pais” on FR3.
At the moment, I dedicate my full time to poetry.

So, when did you start to write poems? And how it comes that you wrote in the language of Troubadours, Occitan?
First, let me  explain  my vision of this language since  I was a child. I grew up in the « heart » of geographical Occitan area, but  I heard few old people speaking this language which was not French.  Until today, in South of France people still speak French with a sort of accent,  what we called “l’accent du Midi” (“ the Southern accent”),  which is considered charming or funny or ridiculous), and I  understood something that impressed me a lot. I realised that it was not a French accent, but the accent of a foreign language, and that, the accent was what remained from Occitan previously spoken in families, in this area. Above all, I realised that everybody in the South kept a kind of testimony of that language, even those who have never spoken Occitan.
From my father, later,  I learned that  this language was called “Occitan” and that it came from Latin. However, even if my grandmother sometimes used some sentences in Occitan, I had never heard it  spoken among the members of my family – as it had happened, for example, to  other  people of my age who might have heard Occitan spoken fluently between their grandparents).
To my childish mind, Occitan was like the language spoken by Native Americans in Western films; I compared Occitan to it, and I felt like having precious and secret roots… I was attracted by this. Then, when I was around 13, my dad, who was teaching French literature in high-school, decided to teach Occitan. He took me and my brother as “guinea-pigs” during summer holidays. That’s how I had both a familial and academic learning.
Writing poetry in Occitan:  Well, it was accidentally, really. When I was 18, an English friend of mine, asked  me to write a poem for some Foreign Languages poetry prize in England. I had never written any poem and I  composed it in Occitan; I did it very spontaneously, naturally, I would say. Then I kept writing like that, and my first published collection, in 2006, was in Occitan without any French version or translation.
Of course, I was asked, and I asked myself, after a while, about that choice, which is obviously not common in a country like France, where the historical languages of the country are not even considered as officials. France never signed the European Charter for Regional or Minority Languages… I was sure of one thing, my choice was not political, it was not a conscious act of cultural militancy.  I was just deeply touched by the sounds of  Occitan, by  its words  to catch the world, which carried new and unique perceptions.
Occitan is not my mother tongue. Whatever it is our mother tongue, it introduces us into a utilitarian relationship with the world, and it bequeaths us conventions and inhibitory prohibitions. I did not grow in Occitan  language. So, in a way the relationship between Occitan and the world was still “virgin” to me, and that was a good condition to be in: to develop a creative connection with Occitan, I would say. And when I use the term “creative”, I think of Bergson.  Poetry, such as I conceive it, corresponds to Bergson’s conception of art in general. According to him, art untied us from utilitarian perceptions of the world, and taught  us to renew our glance on reality.
Finally, I chose this language for its own beauty (colours, tones, sounds, rhythms, etc.),  but also because it favoured an aesthetic detachment from the world allowing me to approach it spontaneously in a poetic dimension.
At the moment I am dealing with a very strong and strange experience with languages. I have felt the desire to  experience and illustrate my own mother language (French) into poetry, as well.  Since the publication of my first collection, in fact,  I have begun to write more and more bilingually. I don’t mean translations. It’s a real bilingual process of writing. I have two pages in front of me and I compose simultaneously in both languages, and the two final versions are not necessarily identical. I go from one into the other without critical distance. They surprise me in their movements.
I have to say that Occitan language has given me the opportunity to enter into poetry, but also to tame my mother language as a language of creation.

Does your  interest in music has something to do with the Occitan language, as well? Do you sing and/or write songs in this language?
Well, I have sung in Occitan much earlier than I have learned how to speak it. I learnt it by myself from the CDs of traditional Occitan songs I had. For many years, it was a very private thing. Learning those songs, at that time of my life, was a kind of “rescue operation” for me. It took me a while to dare to sing in public. I still feel very fragile when I do it, but I do it now. I regularly accompany my readings with short pieces of Occitan traditional songs. It happened gradually when it occurred to me that every time I was doing a reading I felt the same physical feelings that I experienced when I sang: breath, shades in the voice, and  also this feeling that, in a way,  voice is connecting visible world to invisible world. I don’t know how to express it, but there is a real spirituality in the act of singing, it’s very possible to give the same power to words.
My wish now is to  be able to improvise songs. I do it for my own, but I haven’t  share it in public yet. I have to explore it, a long work I’m sure… I look forward to meeting  people who will accompany me through  this path.

Do you think that keeping alive this language has in some way offer you, as a woman, an extra opportunity to deal both with your potentials and with the right to share an equal space in this male-oriented society?
Well, I don’t think so. I’m revolted by all kinds of inequalities, but I don’t bring my gender as an identity as well as I don’t bring the fact Occitan is a minority language as an identity. Yet I think that if I do well my job, with exigency and honesty, it will be an example of what a woman can do, of what Occitan language can offer; but all this comes after in the process, as a result.

What is your inspiration? An image, a feeling, a fact…. in other words how does the process of creation  work for you?
I need silence. I organize my time in order to have several periods of writing in one year. I write much better when I’m totally focused on it. I use to follow a dramaturgy, a kind of  architecture. For example, my new book of poems to be published in May (En quete d’un visage, Editions Bruno Doucey) is a dialog. A dialog between Ulysses and Elle (which is the English for she). The  story happens before Homerus’tale, Elle has no name because she has been forgotten by  poets, she is out of memory, or I would say that she comes before memory. It’s written in eight “Songs”, eight movements. Each of them is introduced by a poem in prose which functions as the  Chorus in ancient drama. It has to be read from its first page to its last one, whereas many other poetry collections can be opened at random.
Once I see the architecture of the book, it helps me a lot to “find inspiration”. At the very moment of the composition of a poem, I would say that I feel as if I was revealing something that is already there but that was hidden. I don’t feel that much that what I write is mine. It’s as if the words where already there, expecting to be found. In Occitan, at the troubadors’ time, “trobar”- which means ‘to find- was the verb for writing poetry. I feel much like a discoverer than like a creator.

Poetry, as writing, is in some way an individual act, an intimate conversation that the poet decides to share more or less with the readers. Do you agree?
Yes, it’s intimate and also a bit selfish because you have to let the others “out” while writing, including the ones you love.
For me it’s really essential to balance it. My way  is to have a stage activity connected to poetry and  that’s why I perform with musicians or use other forms of arts such as painting, video, dance etc.
In doing so, I share this ‘private act’ of writing twice: both with the other artists when I work with them and with the audience when I perform.

Thanks Aurélia for having shared with us and the readers of  Global Rights your experience.

My soul is cold inside;
It’s quaint, romantic.
Me,
I would have boarded the boat in Greece.
At Santorini I’d have drifted
On the back of a mule
Right out to sea.
I would have hung up my light
On the branch of an olive tree.
Inside a whitewashed house
I’d have made love to divine fishermen
And defrocked monks.

Her skin, hot and dark
Like a summer’s night,
Stretches to catch out the dawn
As her wild-mare body moves,
Uncoiling once more
Probing in the deepness of her limbs
A bird-catcher’s paradise.

And don’t turn back

You’ve chosen the path for the land of night.
The desert is made of ice there
And the stars die of boredom.
Stretch out your arms and dig,
Dust will be your bread,
You’ll swallow our tears.
Go now, go, and don’t turn back.
If you hear the stones wailing,
The letters of your name are being engraved.

Anna Lombardo, interviews, Occitania, poet, Top
You may also like