The message from YBŞ and YJŞ draws attention to the ongoing hunger strikes of Kurdish political prisoners across Turkey’s jails that the world is, apparently, at present ignoring 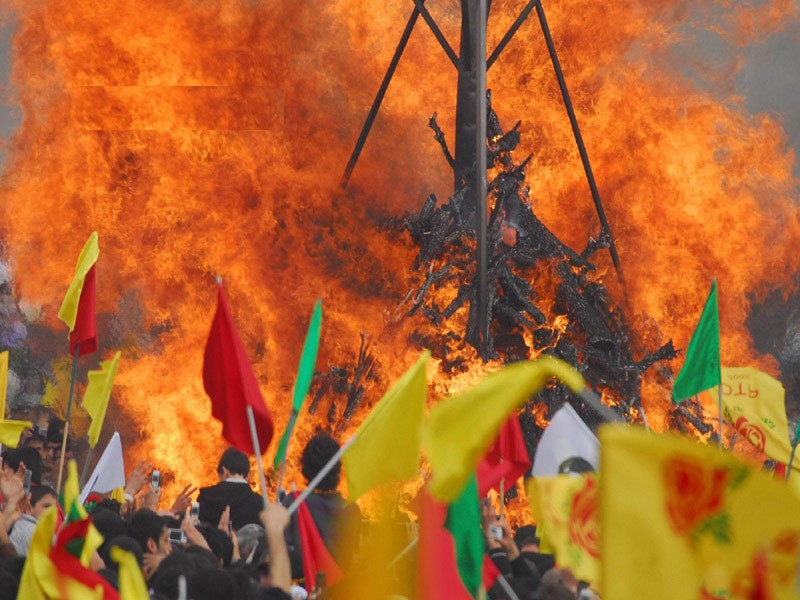 Monday, March 20, 2017: Ajansa Nûçeyan a Firatê – the ANF news agency‎, released a message and statement from the Shengal Resistance Units (YBŞ) and Shengal Women’s Resistance Units (YJŞ) Command on the arrival of  Newroz – the new year holiday in Kurdish society that coincides with the March or Northward equinox and falling mainly on 21 March. The message draws attention to the ongoing hunger strikes of Kurdish political prisoners across Turkey’s jails that the world is, apparently, at present ignoring

We carry the full message below:

“We celebrate Newroz, the day of resurrection, rebellion and freedom, for Leader Apo who is the architect of the resistance and liberation of Shengal, our comrades that are representatives of the Newroz tradition of resistance and fight relentlessly in all emplacements, and our dear people that have stood with us, resisted and made sacrifices during the most difficult periods of time.

One of the ancient peoples in the Middle East, our people have recreated themselves with the holy fire and protected their existence, social values and faith from occupant and colonialist attacks as the people of fire and the Sun.

The Newroz fire has become the identity of our people and the symbol of the rebellion and freedom struggle of all oppressed peoples that have been subjected to repression, atrocity, invasion and occupation for thousands of years. This fire has become the spirit of resistance and rebellion in our region up to date, and it has grown stronger every day.

Since when Kawa the Blacksmith lit the fire of rebellion against Dehaq’s cruelty, Newroz has become the name of the day when all Middle Eastern peoples organized themselves and enhanced the struggle by refusing to surrender in the face of attacks. Every period of the history of civilization is the history of attacks and efforts of invasion against our people that have refused slavery and exploitation.

Standing their guard by smashing the borders drawn by civilization and the borders of slavery and exploitation, our people have become the people of fire and Newroz with their resistance and insistence on free life.

Getting closer to a free life every passing day under the guidance of the Newroz spirit and resistance, our people with their glorious Shengal resistance will become the guarantee of freedoms by leading the struggle for all oppressed peoples in the Middle East and all ignored identities. The freedom march started by Leader Apo in 1973’s Newroz has grown in the holy mountains of Shengal and become the torch of free life that brightens the Êzidîs and all oppressed peoples. Our people resist all sorts of invasion and betrayal under the light of that torch, and build a new and free life with great determination against unprecedented attacks of invasion.

Our people that march towards a free life on the path of Newroz’s resurrection and resistance raised by Leader Apo have become the honor of Ezidis and Shengal’s symbol of resistance as they follow the footsteps of Newroz martyrs Mazlum Doğan, Rahşan, Zekiye, and Ronahi and create heroes against cowardice and betrayal. Our people, who recreated themselves in the line of resistance led by Leader Apo and under the guidance of our martyrs, have given the best response with their struggle against the attempts of invasion and betrayal.

There is a need more than ever today to strengthen the unity and struggle of our people at a time when dirty plots against our people are underway and attempts are made to re-initiate the attempts of a genocide-massacre that we have prevented. Our people will not allow the attempts of betrayal and occupation just like how they adopted the right stance and resisted in the face of collaborative betrayal attempts in Shengal and our land.

We salute the resistance of our comrades that have launched an irreversible-indefinite hunger strike in prisons against the genocidal attacks in North Kurdistan, and state that this resistance will be crowned with victory by the spirit of Newroz which is the symbol of freedom.

On this basis, we celebrate Newroz for our people that have always supported us and put up ceaseless resistance, and for our comrades that are in the emplacements of resistance, and we call upon our people to enhance their support and struggle, and our youth to join YBŞ-YJŞ ranks so that 2017 becomes the year when Shengal is completely liberated, our captivities are rescued, and the threat of massacre and betrayal is completely removed.”