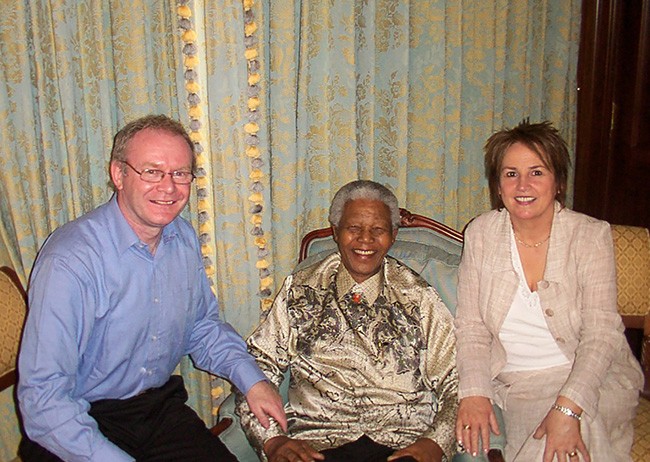 MARTIN McGUINNESS’S contribution to the struggle for Irish freedom and sovereignty for over 40 years has been immeasurable.

Since his decision to resign as deputy First Minister and take a step back from frontline politics, the tributes flowing in from politicians, church people and citizens from across the religious and political divide and from all walks of life are testament to the stature of the man and the esteem in which he is held.
He has been described as a political giant, a colossus, “The Irish Mandela” but the one that I have heard most often and which is the most accurate is when people ask: “How is our Martin doing?”

For me, that’s the description that most appropriately encompasses what Martin McGuinness exemplified throughout the past 45 years – a man of the people – ‘Our Martin’.

Martin first appeared in the public consciousness as a young man defending his people in the Bogside from British occupation forces, quickly emerging and recognised as a leader of his community.
That he would be a force to be reckoned with was apparent even in those early days of the conflict when in 1972 – at the age of just 21– he featured prominently in a republican delegation which was flown to Cheyne Walk in Chelsea, London, by the RAF for talks with the British Government.
Although those first steps towards a resolution of conflict were unsuccessful, Martin’s commitment to the struggle and its resolution never diminished.
As always, leading from the front when the opportunity emerged in the 1980s to re-engage in an effort at resolution, as Sinn Féin’s Chief Negotiator, Martin led secret contacts with the British Government, culminating in the cessation of military operations by the IRA. This historic initiative opened up the space for all-party negotiations which in time produced the Good Friday Agreement, endorsed overwhelmingly by the people of Ireland.
Since then he has navigated many a stormy crisis in the operation of the political and peace processes, always coming out the other side in a better and stronger place.
Elected MP for Mid Ulster against all the odds in 1997, he unseated the DUP’s hardline Willie McCrea, the single unionist candidate, and despite the nationalist vote being split with the SDLP standing against Martin.
At the Assembly elections following the Good Friday Agreement, Martin was also elected MLA for Mid Ulster, bringing in two running mates in Francie Molloy and the late John Kelly.
At the establishment of the first power-sharing Executive, Sinn Féin leader Gerry Adams nominated Martin as Minister for Education, a role he carried out with the same dedication and energy as he approached every other task he took on. The transformation of not only the educational curriculum but the schools estate was the most extensive in the history of the department. Children all over the North are now studying in the most modern school environment possible because of the school building programme initiated by Martin McGuinness and progressed by his Sinn Féin successors, Caitríona Ruane and John O’Dowd.

In 2007, following the conclusion of intense negotiations at St Andrews and an historic agreement between Sinn Féin and the DUP, the Assembly was convened on 8 May and Martin formally took up the position of deputy (joint) First Minister alongside Ian Paisley Snr.
The working relationship soon developed into a genuine friendship and co-operative government partnership. It was a friendship with Ian Paisley and his family that lasted until the day the DUP leader died and beyond. There can be no doubt that this relationship developed in no small way due to Martin’s affability and ability to reach out in a genuine endeavour of reconciliation. Following the resignation of Ian Paisley, Martin, in his usual positive approach, built working relationships with Ian Paisley’s successors as DUP leader, Peter Robinson and Arlene Foster.
But his efforts for peace making and reconciliation didn’t just apply to our own situation here in Ireland. Martin’s experience and negotiating skills were recognised and sought after in assisting the search for peace in other conflict zones throughout the world, requests which he wholeheartedly and positively responded to.

Along with Gerry Adams, and others, Martin led the transformation of our society from one of conflict and division, to one of peace – underpinned by the Good Friday Agreement, and the establishment of new political relationships at home and between Ireland and Britain.
But, of course, change does not come easily. It takes hard work, risks and, most importantly, leadership. Martin McGuinness has never been found wanting in any of these departments.
His leadership role in promoting equality, respect and reconciliation did not come without risks to his personal and family security. He has faced attacks and threats from a variety of sources but particularly from those who would portray themselves as republican.
He has faced them all with the same courage and determination he displayed throughout 45 years of service to the people. His record, his commitment and the limitless energy that he brought to the peace and political processes is beyond question.
The fact that all of his reconciliation efforts – including several meetings with the British queen – have been met in the main with a lack of respect and a failure by political unionism to reciprocate his efforts has been disheartening at times to the wider republican and nationalist community.
Despite this, Martin has persevered – because it’s been the right thing to do.

For the past 10 years as deputy First Minister, he worked tirelessly to make the political institutions work in the best interests of all citizens they are supposed to serve – nationalist, unionist and all other political persuasions -– on the basis of fairness, equality and respect.
He has engaged in unprecedented efforts to make friends with our unionist neighbours, and to find common cause both within the Assembly, and in wider society, to build a permanent peace.
Even now, while dealing with a serious illness and all that entails, he has indicated his intention to continue with that work.
He certainly hasn’t gone away, you know.
That is the measure of the man.
We are immensely proud of Martin McGuinness and the strong record of leadership that he has shown. His recent decision to resign and force an election was not taken lightly. It was not taken on a whim or as his first option. It was only after long and serious consideration of all the elements that brought him to the conclusion that it was time to call a halt to DUP arrogance, disrespect and contempt towards Sinn Féin as partners in Government and the public in general.
DUP actions leading to a lack of public confidence in the political institutions and by a succession of scandals involving DUP ministers including the Renewable Heat Incentive scandal, NAMA and Red Sky coupled with its irrational attitudes towards Irish identity and language, LGBT rights, Brexit and the unacceptable threat it poses to progress in the North could no longer be ignored or tolerated.

Martin made it clear to DUP leader Arlene Foster that we will not allow the North to slide back to the old politics of the past. Nor will we accept the failure of parties or individuals to demonstrate integrity and accountability in Government; those who consider themselves to be political elites who put their own interests first; or engage in greed and corrupt politics. And we will not stand for the denial of rights, equality or respect for citizens.
Sinn Féin will not tolerate the failure of others to meet the standards in government exemplified by Martin McGuinness. The public deserve no less.
No tribute to Martin McGuinness could be complete without recognition of the enormous contribution of his family – his wife Bernie; his children Gráinne, Fionnuala, Emmet and Fiachra; and the wider McGuinness family. Without their full and wholehearted support for Martin and the work he has been involved in we would have been denied the talents and first-class leadership that Martin McGuinness has brought to the republican struggle and to politics throughout this island and beyond.
He is their Martin but their selfless support has ensured that he will always also be ‘Our Martin’. We thank them and him for that.