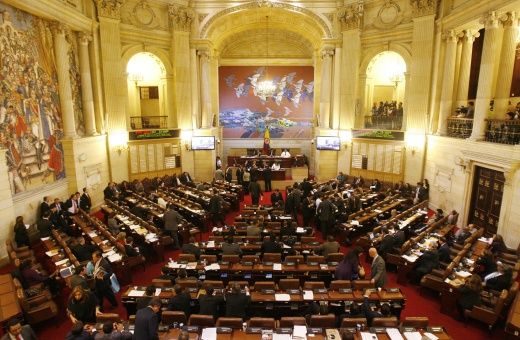 Although reaching the quorum was difficult at the beginning of the session, finally the Special Jurisdiction for Peace (JEP) was approved with 61 votes in favor and two against.

The legislation passed on the last debate, in the plenary of the Senate on Monday night and with only 60% of senators present.

The JEP is the trial system agreed in Havana for ex-combatants accused of crimes against humanity, genocide and war crimes – guerrillas and military – who will be investigated and tried after the end of the conflict with the FARC.

This system will be a kind of constitutional umbrella and will give life to the processes against members of the FARC indicted of war crimes, crimes against humanity and genocide, among others.

One of the main changes that was introduced in the last debate was a section that indicates that the statutory law that will be processed later to regulate the JEP it should be established when the crimes related to drug trafficking will be a matter for the ordinary justice system and when of the special justice of peace.

The legislative act includes a chapter on the prosecution of State agents, which included conditions for commanders to be tried for crimes committed by their subordinates, and a distinction was made between the treatment of soldiers and other civilians belonging to the State.

The approved initiative also includes a chapter that guarantees «non-extradition for all members of the FARC and persons accused of belonging to that organization, for any conduct carried out prior to the signing of the final agreement» and who ask to be judged under the JEP.

Likewise, the creation of a Commission for Clarification of the Truth is established.

This mechanism seeks to «contribute to the clarification of the violations and infractions committed in the same and offer a broad explanation of its complexity to the whole society».

The Democratic Center opposition party reiterated its criticism of what was agreed in Havana and during their speeches senators said that this transitional justice leads to «impunity.»

Different position had the prosecutor Néstor Humberto Martínez, who has made several critics to the project, but defended the initiative to ensure that «the JEP is not synonymous of impunity. It will be a transitional justice for a country emerging from armed conflict. »

The debate was intense. Concerns still persist in congressmen, especially on the point of trial of civilians who participated in the conflict.

The initiative will now be conciliated in the plenary sessions of the Senate and Chamber and will later go on to the President.