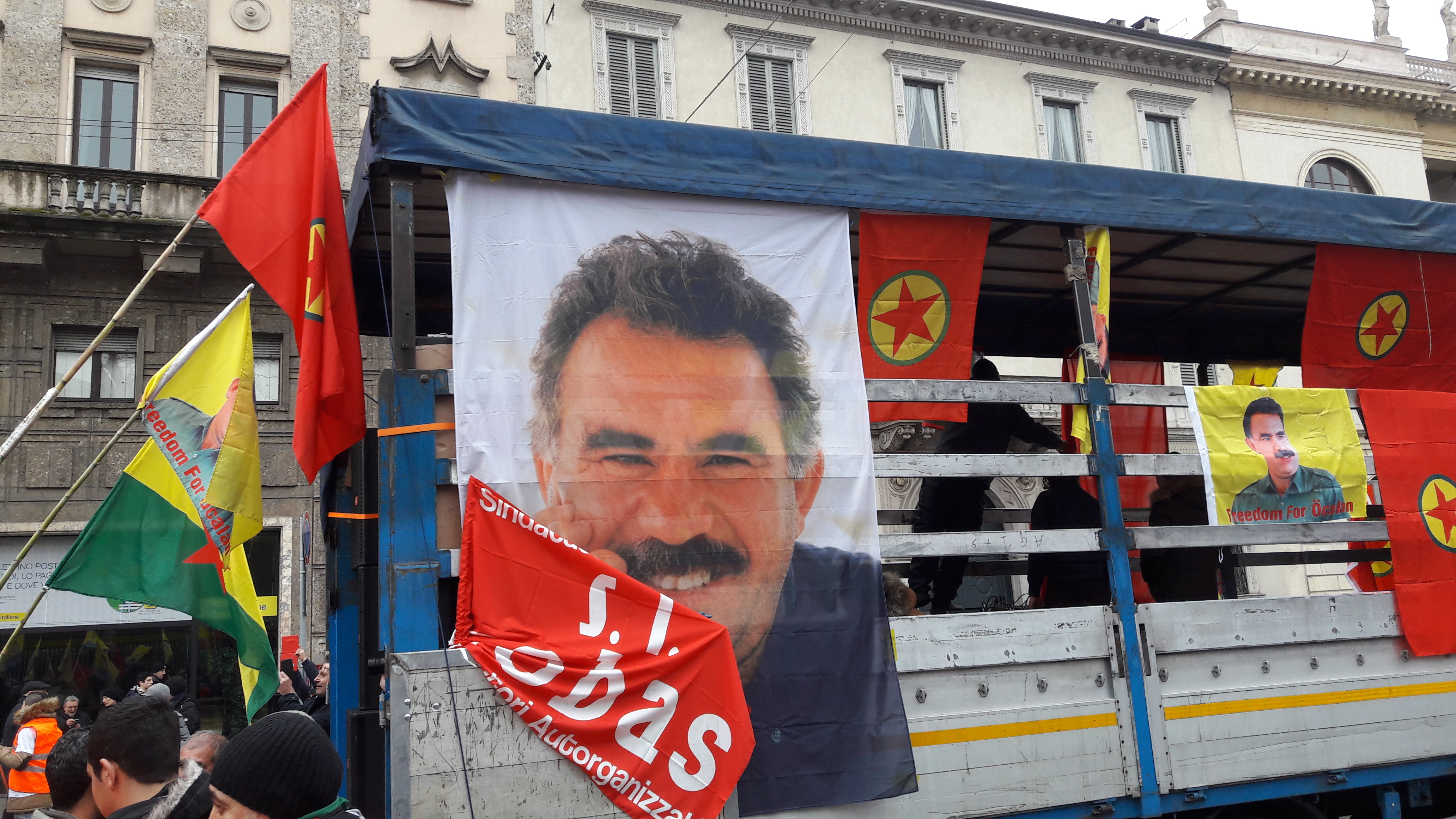 ‘The Political Thought of Abdullah Öcalan –

April 15 saw the launch of Abdullah Öcalan’s new book: The Political Thought of Abdullah Öcalan – Kurdistan, Women’s Revolution And Democratic Confederalism’ published  by the British-based progressive publisher, Pluto Press. 176 pages long this modest-sized work sets about «bringing together Öcalan’s ideas in one slim volume for the first time, The Political Thought of Abdullah Öcalan contains a selection of his most influential writings over his lifetime. These ideas can be read in light of Öcalan’s continuing legacy during the ongoing revolution and the battle against conservatism and religious extremism. As the political situation in Syria intensifies, this book offers a timely and essential introduction for anyone wanting to come to grips with his political ideas on the Kurdish question, gender, Democratic Confederalism, and nationalism.»  the University of Chicago Press, Pluto’s American distributor, tells us.

Abdullah Öcalan is one of the founding members of the Kurdistan Workers’ Party. The Kurdistan Workers’ Party, the PKK (Kurdish: Partiya Karkerên Kurdistanê‎) was founded on 27 November 1978 in the village of Fis (near Lice, Diyarbakir Province) in south-eastern Turkey – Northern Kurdistan, by a group of Kurdish students led by Öcalan who had spent the preceding years organising for Kurdish rights and suffering violent attacks by Turkish state organisations including the Turkish military, the Grey Wolves, (a rightwing nationalist group linked to the MHParty) and also some of the Kurdish landowners who viewed the group as a threat.  By 1984 the organisation was at war with the Turkish state. The PKK quite early on adopted a Marxist-Leninist framework which has developed significantly over the years and now has been completely revised since Abdullah Öcalan’s arrest in Kenyatta airport in 1999. Öcalan was arrested that year by the Turkish National Intelligence Agency (MIT) with the support of the CIA in Nairobi and taken to Turkey, where he was sentenced to death under Article 125 of the Turkish Penal Code. The sentence was commuted to aggravated life imprisonment. Since that time he has been imprisoned in the maximum-security prison on İmrali island, in the Sea of Marmara, where for a number of years now he has been arguing (when allowed to communicate by the Turkish authorities) for an end to violence and a political solution to the ‘Kurdish Question’. From his prison cell, Öcalan has studied and produced over 40 books, addressing the Kurdish struggle for freedom and his significant work on «Democratic Confederalism»,  based largely on the thinking of the American political philosopher Murray Bookchin, (January 14, 1921 – July 30, 2006) which has had a significant impact within the Kurdish liberation movement and in the remarkable achievement of the liberated zones in Northern Syria, Rojava, where the theory is currently being put into practice despite enormous dangers.

«These are the essential writings of a man who inspired a new, egalitarian socialist regime in the Middle East, which is currently fighting for survival against religious extremism and state violence. Abdullah Ocalan led the struggle for Kurdish liberation for more than 20 years until his capture in 1999. Now, writing from prison in Turkey, he has inspired a new political movement. Called Democratic Confederalism, this revolutionary model is developing on the ground in parts of Syria and Turkey; it represents an alternative to religious sectarianism, patriarchy, capitalism and chauvinistic nationalism, providing the blueprint for a burgeoning radical democratic society. This selection of Ocalan’s writings is an indispensable introduction for anyone wanting to engage with his political ideas. His central concepts address the Kurdish question, gender, Democratic Confederalism and the future of the nation. With The Political Thought of Abdullah Ocalan, his most influential ideas can now be considered and debated in the light of his continuing legacy, most notably in the ongoing revolution in Rojava.» (Google Books – Review)

You can purchase University of Chicago distributed titles worldwide:

While waiting for your copy of ‘The Political Thought of Abdullah Öcalan -Kurdistan, Women’s Revolution And Democratic Confederalism’ to arrive, you can download the following titles by Abdullah Öcalan in PDF format – for free – and get started:

Abdullah Öcalan, The Road Map to Democratisation in Turkey, and Solution to the Kurdish Question, published by the International Initiative “Freedom for Abdullah Ocalan – Peace in Kurdistan” (pdf).

Preview The Book – ‘The Political Thought of Abdullah Öcalan’:

Also take a look at the essays:

Bookchin, Öcalan, and the Dialectics of Democracy

Other Books: by Abdullah Öcalan (Bibliography)

«The right of self ­determination of the peoples includes the right to a state of their own. However, the foundation of a state does not increase the freedom of a people. The system of the United Nations that is based on nation­ states has remained inefficient. Meanwhile, nation­ states have become serious obstacles for any social development. Democratic confederalism is the contrasting paradigm of the oppressed people. Democratic confederalism is a non­state social paradigm. It is not controlled by a state. At the same time, democratic confederalism is the cultural organizational blueprint of a democratic nation. Democratic confederalism is based on grass­roots participation. Its decision­ making processes lie with the communities. Higher levels only serve the coordination and implementation of the will of the communities that send their delegates to the general assemblies. For limited space of time they are both mouthpiece and executive institution. However, the basic power of decision rests with the local grass­roots institutions.»

Murray Bookchin and the Kurdish resistance