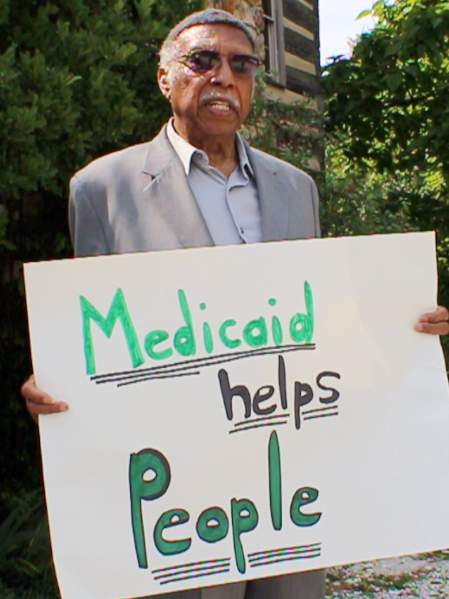 «Americans are fed up with an inhumane, profit-driven health system that leaves millions without care.» —Dr. Carol Paris, Physicians for a National Health Program.

As President Donald Trump and the GOP attempt once again to repeal and replace the Affordable Care Act (ACA) with a much crueler bill, House Democrats are pushing in the total opposite direction: as of Thursday, a record 104 have signed on to co-sponsor a Medicare-for-All bill.

The bill, H.R. 676, known as the «Expanded & Improved Medicare for All Act,» has been introduced into Congress repeatedly by Rep. John Conyers (D-Mich.). It has now received support from more than half of the Democratic caucus, a record for the party.

«Americans are fed up with an inhumane, profit-driven health system that leaves millions without care,» said Dr. Carol Paris, president of Physicians for a National Health Program (PNHP), in a statement. «Quality health care is not a luxury, nor is it a commodity that can be bought and sold in a marketplace. It is a social good that can be best delivered through a single-payer national health program.»

Calls for a more compassionate and fair healthcare system—and unified push-back against the GOP’s efforts to dismantle Obamacare—have dominated contentious town halls during the two congressional recesses since Trump’s inauguration, and advocates say that such grassroots activism has built crucial momentum behind the movement for Medicare-for-All.

Indeed, Rep. Conyers described a critical moment in one of those town halls—and the impact it had—in an op-ed for the Detroit Free Press earlier this month:

One of the most poignant moments came at a town hall hosted by U.S. Rep. Diane Black, Republican of Tennessee, where a constituent explained her opposition to the GOP bill using faith. As a Christian, she said, her faith was rooted in helping the unfortunate, not cutting taxes on the rich, so why not expand Medicaid and allow everyone to have insurance? And she’s not alone. Last week, a Quinnipiac survey found that voters overwhelmingly oppose cuts to Medicaid—74 percent of them—including 54 percent among Republicans.

Given the record high support for publicly funded healthcare, economists, policy experts and commentators everywhere have called on the Democratic party to build on our momentum by supporting a single payer system. But perhaps the most convincing case I heard came from Jessi Bohan, the teacher from Cookeville, Tennessee who spoke at Rep. Black’s town hall.

The week after her question went viral she wrote to the Washington Post that she was troubled to see her comments used as a «defense of Obamacare» instead of what they were: an indictment of any healthcare policy that leaves anyone out. As Bohan so eloquently put it, «it is immoral for health care to be a for-profit enterprise» that allows insurance companies to make «enormous sums of money off the sick while people are struggling to pay their medical bills.» If she had it to do over again, she wrote, she would have explained to Black «the Christian case for universal, single-payer health insurance, which would protect all Americans.»

«While her message was targeted at Republicans, it is one that many of my colleagues in the Democratic Party need to hear as well,» Conyers wrote.

Now, it appears that many Democratic representatives are listening. And they should be: multiple polls in recent years have shown that most Americans support a single-payer system.

As Conyers declared in his op-ed: «Single payer is politically achievable.»

Still, not all Democrats are on board. Advocacy group Justice Democrats, which has been pushing Democrats to support single payer, recently called out the 89 Democrats who have not yet sponsored Conyer’s bill:

«The momentum towards a universal health program is unstoppable,» argued Dr. Paris. «Americans of all political stripes are reiterating their long-held support for improved Medicare for all, and Congress has a responsibility to act. We urge all members—including Republicans, whose constituents are demanding a better health care system—to come together and finally enact H.R. 676. Now is the time.»

Published on Wednesday, May 24, 2017 by Common Dreams: by Deirdre Fulton

«As a Democrat I believe that healthcare of course is a right, not a privilege. I believe [in] universal healthcare, for every American—not just a plan or a contract, but the ability to see a doctor and get treatment whenever they need it. We will never get universal care building on a foundation of private, for-profit insurance.» (Rep. John Conyers [D-Mich.])

As lawmakers and the public awaited the Congressional Budget Office’s score on the GOP’s «horrific» Trumpcare bill, Congressional Democrats on Tuesday doubled-down on their call for a Medicare-for-All system to provide universal healthcare to all Americans.

At a morning press conference outside the U.S. Capitol, Rep. John Conyers (D-Mich.) was joined by fellow lawmakers and healthcare advocates in promoting HR 676, the Expanded and Improved Medicare-for-All Act. As Common Dreams previously reported, (above) the legislation has more Democratic support than it ever has before; as of Tuesday, there are 111 co-sponsors including the chairman of the House Democratic caucus, Rep. Joseph Crowley (D-N.Y.), who signed on last week.

«I’ve never seen more energy behind this issue of Medicare for All,» Conyers said at Wednesday’s event.

The GOP’s cruel American Healthcare Act (AHCA) has galvanized much of that energy, he said, but the shortcomings of the status quo have also played a role. It’s time for something new, Conyers declared—for something visionary.

«People know what we are against, but we want to promote more what we are for,» Conyers said. «As a Democrat I believe that healthcare of course is a right, not a privilege. I believe [in] universal healthcare, for every American—not just a plan or a contract, but the ability to see a doctor and get treatment whenever they need it. We will never get universal care building on a foundation of private, for-profit insurance.»

Still, more than 80 House Democrats don’t seem to have gotten the message.

And Rep. Keith Ellison (D-Minn.), who is deputy chair of the Democratic National Committee (DNC), thinks that could hurt them during next year’s midterm elections.

«It’s not the proper role of me at the DNC to tell people what they’re going to stand for, that’s a choice the candidates make for themselves, but I recommend that you win your election and I think a good way to do it is to support Conyers’s bill,» Ellison said Wednesday.

As Justice Democrats, a group leading the fight to get more party members on board with the surging idea, put it over the weekend:

.@HouseDemocrats, do yourself a favor and be leaders in the fight to give Americans what they deserve: #MedicareForAll. pic.twitter.com/41cLRDIKxr

These works are licensed under a Creative Commons Attribution-Share Alike 3.0 License

The United States National Health Care Act, or the Expanded and Improved Medicare for All Act https://en.wikipedia.org/wiki/United_States_National_Health_Care_Act

Medicare For All – from National Nurses United

Our First Stand: Medicare for All – from National Nurses United