Victory to the Hunger strikers

Last week, we remembered with pride Bobby Sands and Francis Hughes, who died on hunger strike in the H-Blocks of Long Kesh in 1981 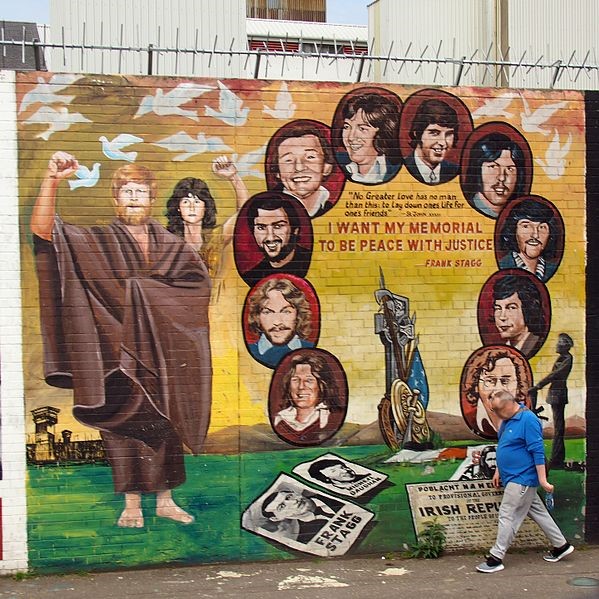 Last week, we remembered with pride Bobby Sands and Francis Hughes, who died on hunger strike in the H-Blocks of Long Kesh in 1981. At the weekend the anniversaries will occur of Raymond McCreesh and Patsy O’Hara. And in July and August we will celebrate the lives, sacrifice and courage of other six hunger strikers who died 36 years ago; Joe McDonnell, Martin Hurson, Kevin Lynch, Kieran Doherty, Tom McElwee and Mickey Devine.

I was reminded of all of this as I read the An Phoblacht/Republican News from July 18th 1981. The paper is a miniature copy that the Sinn Féin POW department and the AP/RN staff produced for smuggling into the H-Blocks and Armagh and to other prisons. The miniatures were four inches by six. They were printed on thin paper to make it easier for them to be concealed for smuggling. The July 18th edition had the one word ‘Sadness’ over three photos. One was a picture from Martin Hurson’s funeral and the other two were of Martin and of Joe McDonnell. This edition of the paper was reporting on their funerals. It also carried a profile of Kevin Lynch who was to die three weeks later.In 1995, on my first visit to South Africa, I met former ANC prisoners who told me of their experience of hunger strike and of their admiration for Bobby Sands and his comrades. The hunger strike as a means of protest has a long tradition in Ireland and especially among Irish political prisoners in English prisons. But as in South Africa it has also been used in other places.Two and a half thousand miles away there are over one thousand Palestinian political prisoners in the fifth week of a mass hunger strike in Israeli prisons. Entitled, ‘Freedom and Dignity’

their hunger strike reflects much that is similar with the 1981 hunger strike, especially in the response of the British and Israeli states. In a letter I received from Marwan Barhouti, the imprisoned Palestinian leader who is leading the hunger strike, he says: “Palestinian prisoners have always suffered from injustice and violations of their rights. But in recent years Israeli occupation authorities have ever deprived us of rights acquired through prior hunger strikes.”The Palestinian hunger strike is about the inhumane treatment of and the appalling physical conditions currently being endured by Palestinian political prisoners in Israeli prisons. It is also has its roots in the all-pervasive oppression of the Palestinian people by the Israeli state; the poverty and deprivation that is the daily experience of Palestinians; the military raids; the theft of Palestinian land and water; the separation Bill, and the construction of illegal settlements. I know from my own visits to the west Bank and Gaza in recent years that there is a deep sense of despair, helplessness in the face of an Israeli state that Europe and the USA refuse to stand up and hold to account by international laws. As a result there is a lack of hope, and lots of anger, especially among young people, and there is huge frustration within the Palestinian refugee camps, the Gaza Strip and the west Bank.   Currently there are six and a half thousand Palestinians held I Israeli prisons. Approximately 300 of these are children. 53 are women and nearly 550 are being held under what the Israeli’s like to call administrative detention – in effect internment without trial.According to Addameer, the Prisoner Support and Human Rights Association more than

800,000 Palestinians have been imprisoned or detained by Israel in the last 50 years.The conditions under which the prisoners are held are appalling.

Torture has been documented. Addameer has reported the case of Arafat Jaradat who died six days after he was arrested by the Israelis in 2013.

The post mortem showed he had six broken bones in his spine, neck, arms and leg. He died of cardiac arrest.The hunger strike among the prisoners, as well as some former prisoners on the outside of the prisons, has already seen one Palestinian hunger striker, Mazan al-Magrebi, die. The prisoners are protesting the mass incarceration of Palestinian people by the Israeli authorities as well as the serious deterioration of prison conditions. The prisoners are seeking basic demands, including access to books, newspapers and clothes, and the resumption of bi-monthly family visits. They are also seeking the installation of air conditioning in prisons where summer temperatures can regularly be over 40 degrees centigrade; an end to the extensive use by the Israeli Penal Service of solitary confinement and access to study and educational facilities, including exams.  Several months ago the worsening crisis in the region saw the United States and Israel succeed in having a United Nations report entitled: Israeli Practices towards the Palestinian People and the Question of Apartheid – withdrawn after just two days. The report was published in March by the United Nation’s ‘Economic and Social Commission for Western Asia’ (ESCWA).

It examines the practices and policies of Israel with regard to the Palestinian people in its entirety. It concludes that ‘Israel has established an apartheid regime that dominates the Palestinian people as a whole. Aware of the seriousness of this allegation, the authors of the report conclude that available evidence establishes beyond a reasonable doubt that Israel is guilty of policies and practices that constitute the crime of apartheid as legally defined in instruments of international law.’The report draws heavily on international law and specifically refers to the definition of apartheid in article II of the International Convention on the Suppression and Punishment of the Crime of Apartheid. It defines apartheid as; ‘… inhuman acts committed for the purpose of establishing and maintaining domination by one racial group of persons over any other racial group of persons and systematically oppressing them.’An Israeli spokesperson described it as “despicable and constitutes a blatant lie,” while the Israeli Foreign Ministry likened the report to Nazi propaganda. The head of ESCWA, Rima Khalaf, resigned rather than withdraw the report.All of this amounts to an escalating crisis in a region which has known little else. Some Palestinian leaders, exasperated and outraged by the Israeli stance, and speaking about a possible intifada, have said there is an onus on the United Nations, and all those genuinely interested in peace in that region, to speak out against Israeli aggression. Just over two years ago a Sinn Féin motion calling on the Irish government to formally recognise the state of Palestine received unanimous support in the Dáil. The Irish government has refused to take that necessary diplomatic step. Sinn Féin will raise this issue this week in the Dáil. In the meantime, there are a growing number of protests in support of the Palestinian hunger strikers taking place across the island. Support them if you can. Organise protests if you are able. In words that resonate with those of Bobby Sands, Marwan in his letter writes: “Some believe that this is the end of the story, that II will perish here in solitary confinement.

But I know, even in this forced solitude, that we are not alone. I know millions of Palestinians and many more around the world stand with us.”

36 years ago the hunger strikers and the political prisoners in the H-Blocks and Armagh Women’s prison were uplifted by reports of international solidarity. Let’s send our Palestinian brothers and sisters a message of hope and support and solidarity. Victory to the Hunger Strikers.