CHRONICLE OF THE LONG JOURNEY WE HAVE JUST BEGUN – PART ONE 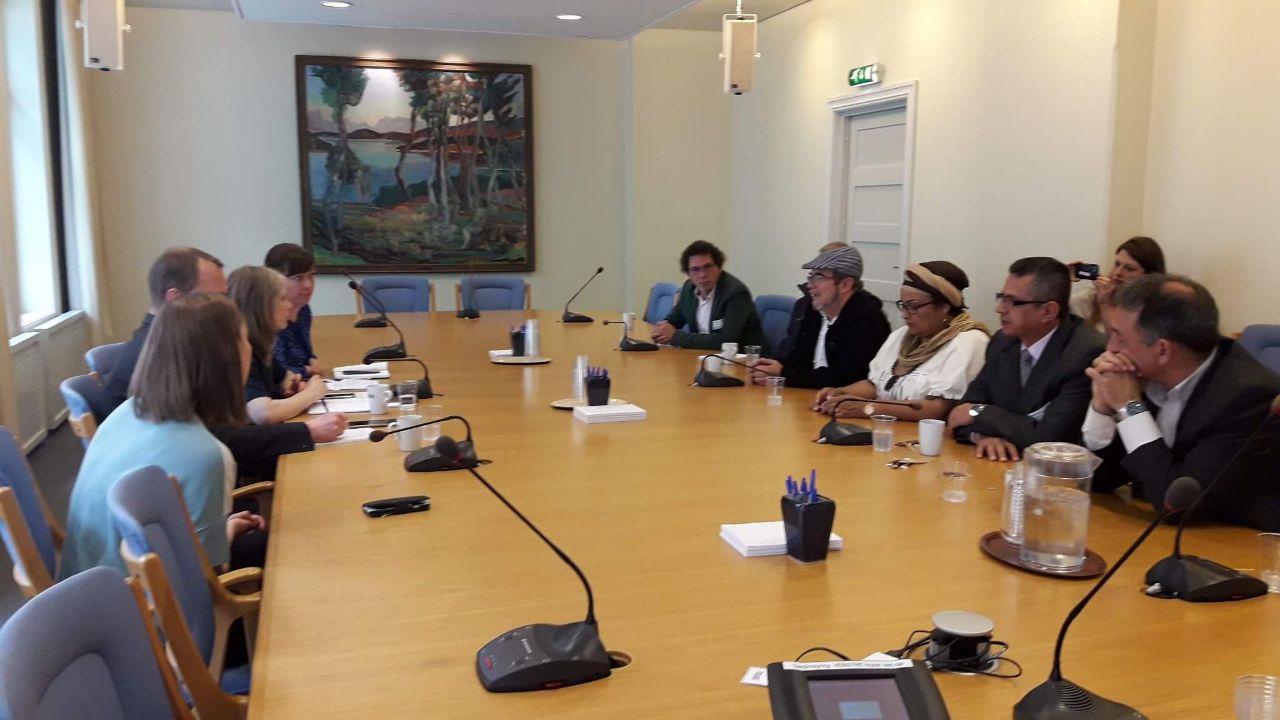 It had been a long time since Timo had slept fourteen hours in a row. In the last weeks his hours of sleep had been cut in an agonizing way, forcing him to get accustomed somehow to that.

But once in Caño Indio, after the moment of greetings and welcome, after having lunch a succulent toruno cooked in a guerrilla stove and by guerrillas, in the old style of the mobile camps, after trying to respond to some emails resisting the overwhelming heat of the Catatumbo region, he found it impossible to resist the sluggishness that was invading him. He said he was going to lie down for an hour to continue his work, but the sleep lasted until nine o’clock at night, without anyone trying to interrupt him.

When he realised he was surrounded by darkness, after looking at the time on his watch, he went back to sleep deeply, and only at four in the morning did he wake up again. Surprised by the intensity of his lethargy, he stretched out his arm and turned on his portable radio. He learned that Pastor Alape had clarified that it was not true that he was going to hand over his rifle to the governor of Antioquia, who, who knows why, had said so to the media. Luis Pérez had been invited to the act of the following Sunday simply to witness his abandonment of arms, as the former commander of the Magdalena Medio Bloc had been expressed in a twitter. Timo smiled content and until turned the station button until he found a music of his liking, quickly returning to sleep until five-thirty in the morning. At that point he decided to get up, somewhat embarrassed, to restart his work of directing the FARC. He had fully regained his strength and lucidity. 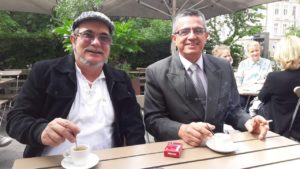 His most recent journey had begun on Sunday, June 11, when he boarded the helicopter that came to pick him and his companions to transfer him to Bogota, where at six o’clock on Monday morning, after a short stop at the airport Eldorado, he boarded the flight to Oslo, Norway, where he had been invited by the government of that country, to attend the fifteenth edition of the Oslo Forum, a meeting of different personalities of the world, dedicated to studying the experiences of mediation and peaceful settlement of the world’s most serious conflicts. The 13-hour flight would have a stopover in Santa Maria, one of the islands of the Azores archipelago, only to refuel, and then continue without interruption to its final destination.

The attentions of the Swiss stewardess of Indian origin deserve to be remembered. Apart from the three meals during the day-long flight, she frequently offered us refreshments, and even wine, drinks and the liquor that we wanted. Timo would laugh with surprise, when he returned to Colombia, when he read a “scoop” by Semana magazine, according to which during the flight to Norway the FARC commander had demanded to be served a plate of suckling pig, which had thrown the crew in a panic until they were able to satisfy his desire. A ridiculous invention of the magazine, with which it undoubtedly intended to show the country how peasants the FARC are, which, if true, would not embarrass us at all given our popular background, but which nevertheless reveals the class character of the publication, the discriminatory sense of their articles when they refer to the type of people who do not have their style.

In Santa Maria there was an unforeseen delay, caused by some search carried out by the Portuguese police, that thought it was strange that a private flight of a Norwegian airline had left Colombia with mysterious passengers. Functionaries of the police and the Norwegian chancellery, who were escorting the guests, got off the plane to clarify the matter in the airport offices, while Ricardo Téllez, Victoria Sandino and other occupants joked about it. Once matters were cleared, they returned to the aircraft and the flight continued without any further alteration. 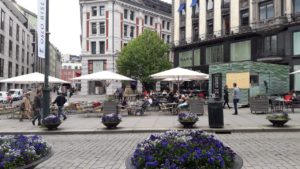 It had to be 6.30 in the afternoon in Colombia when at 1.30 the plane landed at Oslo-Gardermoen Airport in the Norwegian capital. From the air its travellers had watched in amazement the incredible illumination of the city and its avenues, as well as the multitude of towns and suburbs showing their nocturnal lights, as if by some strange inversion the sky studded with stars of the Caribbean had landed on earth. When without delay the passengers of the flight left the airport to board the vehicles, we saw a near full moon, perhaps a little waning, flashing with prodigious size in the sky.

One could think that she was responsible for the opaque luminosity that we could see in the surroundings, in a strange night that did not seem such, at least not like Colombians are used to live it. It had been too many hours for Timo without smoking a cigarette, so he asked the kind Norwegian officials who welcomed us if there was a chance to smoke. They replied that yes, in Norway one could smoke in any outdoor space, as it was forbidden to do so in any enclosed space. There were then the first photographs taken on cell phones, making sure that the pines and the moon stood on the background. After throwing the butts in the containers located for that purpose on the platforms, we were transferred to the Losby Gods Hotel on the outskirts of the Norwegian capital.

Before getting there, we saw a revealing phenomenon. The night, which had barely begun, sometimes after twelve, as one of our companions explained to us, came to an end well before three in the morning. It was incredible for us. The summer day lasted almost twenty-two hours and the night only two. Plus there were the seven hours difference.
It was explained to us that in winter the opposite happened, there was practically no day, November, December, January and February passed in a permanent darkness, under deep cold and incessant rains. Even for the Norwegians, that was too much.

When we arrived at the hotel and the rooms, very luxurious rooms, we had trouble getting to sleep. It was not yet three o’clock and it was daytime, too early in Colombia to go to bed, plus the light from the windows prevented the mind to assume this was sleeping time.
We had to be ready in the dining room at 7 and 30 in the morning. The atmosphere there was that of a Babel Tower: sitting at the smartly prepared tables, men and women of all races chatted animatedly. The most common language was English, which none of us spoke, except from good morning and thanks, and the most common dress was a suit and tie, but appearances were as diverse as languages.

Americans, Europeans, Iraqis, Libyans, Somalis, Nigerians, Yemenis, Cypriots, Turks and others. The buffet offered us everything, and I mean really everything: meats, fish, poultry, eggs, seafood, sausages, dairy products, salads, sauces, fruit of the most different type and place or origin. The same applied to the three daily meals that we were offered during the days we spent there. The taste of the food was a prodigy, choosing anything meant giving up other delicacies, it hurt to resign yourself to not try everything.

The Oslo Forum imposes a rule of confidentiality. In dealing with the conflicts they are involved in, the participants and guests, many of them located on opposite sides of the confrontation, are completely free to express their ideas and opinions. This makes it possible to get closer to the situations and realities that could facilitate a work of mediation, while getting to know the unilateral impositions of the great world powers, always condemnable. This can be discussed later, but after making a pledge. None of those present can say who said what, it is prohibited. This is to ensure the utmost freedom for those who speak. 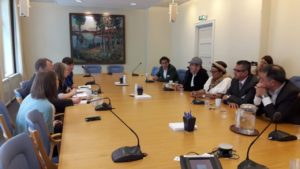 The sessions of the fifteenth Oslo Forum dealt with issues such as stability under threat in Southeastern Europe, a renewed reconciliation agenda for Somalia, the multiple dimensions of the conflict in Nigeria, the challenges of reconciliation in Iraq, the peace process in the Philippines, the dilemmas of popular ratification of peace agreements, the interests in Syria, the resurrection of the dream in Southern Sudan, the situation in Cyprus, the situation in Yemen, and what most interested us, a plenary session on the Colombian case, bringing peace to the practice.

On Tuesday, June 13, the Opening Plenary took place between 9:45am and 11am with the participation of John Kerry, Kofi Annan and several prime ministers, chancellors and ambassadors. Each diplomatic representative had the right to bring a companion. It was a good surprise see that Timo was allowed to attend with four more companions. As is often the case in such events, it is very important to hold informal bilateral meetings. It must be said that the FARC delegation was able to make the most of it, thanks to the help of Norwegian Foreign Minister Borge Brende, who facilitated multiple meetings. These include meetings with Federica Mogherini, High Representative of the European Union for Foreign Affairs and Security Policy and Vice-President of the European Commission, Jeffrey Feltman, United Nations Under-Secretary-General for Political Relations, Johnatan Powell, Director Of the Inter Mediati Foundation, Theresa Withfield, official responsible of the Policy and Mediation Division of the Relations Department of the UN, Benito E. Tiamzon, representative on the Negotiating Panel of the National Democratic Front of the Philippines, as well as representatives of the Syrian government. 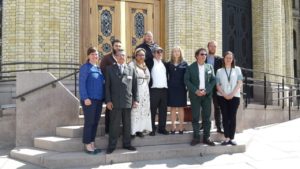 It is worth noting the recognition of all of them for the FARC’s commitment to achieve peace in Colombia, for our consistency in order to sign a Final Agreement, for our determined willingness to comply with the agreement, as well as the constant offer of their collaboration to ensure the implementation of the Havana Agreements.
Norwegian Foreign Minister Borge Brende not only facilitated a press conference with Timo and the main Norwegian media, transmitted by the mainstream media of that country, but also met with us together with several officials of the Foreign Ministry with the purpose of jointly examining the possibilities of action of his government as a guarantor of the peace process and the agreements.